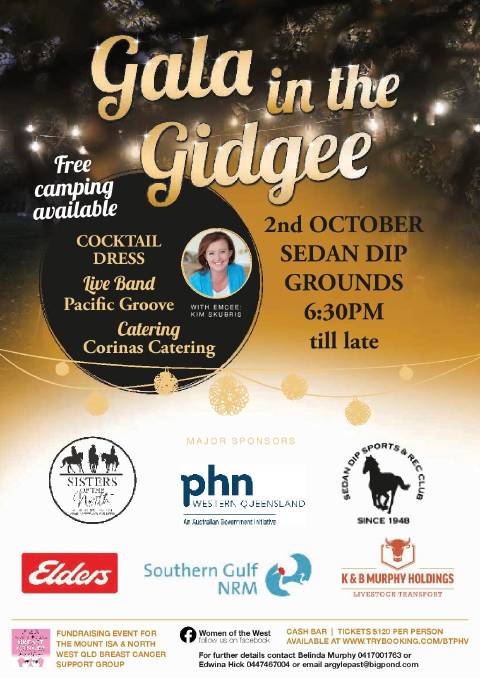 Belinda Murphy and Edwina Hick originally came up with the idea of a Women's Wellness Weekend in 2018 but the massive monsoon event of February 2019 washed all thought of that away for a year.

"The idea was still there though," Ms Hick said.

"I mentioned one day that breast cancer awareness month was coming up, and we should host a brunch.

"The people we spoke to that had been affected by breast cancer said the best use of funds would be made by a specific group, the Mount Isa and North West Queensland Breast Cancer Support Group.

"They are survivors who do fundraising and awareness raising work - they make $1000 donations to people to offset their costs.

"Plus it means that for people undergoing treatment, they feel that someone is thinking of them."

The brunch last October attracted 200 women to the old dance hall at Sedan Dip, featuring speakers and a silent auction that raised $11,000.

That success has spurred the two women on to the upcoming Gala in the Gidgee cocktail evening, which includes the men this time round.

There has been no end of support from sponsors such as the Southern Gulf Catchment, the Primary Health Network, and Sisters of the North.

Among the dazzling array of donations are a service fee donated by Kim and Evan Acton to Millungera Moonbeam, 1000 litres of diesel from Woodland Produce, three nights of accommodation at Magnetic Island and a tonne of lick from Causeway Produce, a silver bracelet from Jill Dyer, a bush bronze from Jaye Hall, an esky from Worn out West, and a photograph from Jo Thieme.

In addition raffle tickets for a saddle donated by TBM Saddles have been selling for the past five or six weeks and attracting a lot of interest.

The gala is shaping up beautifully, according to Ms Hick, with a live band from Mount Isa booked and Julia Creek's Corrina Solitt catering.

"We are very passionate about this," she said.

"Breast cancer is one of those things - everyone you know has someone who's been affected.

"My grandmother passed away at the age of 42 - I never knew her.

"We'd love people to dance the night away under the stars for the cause."