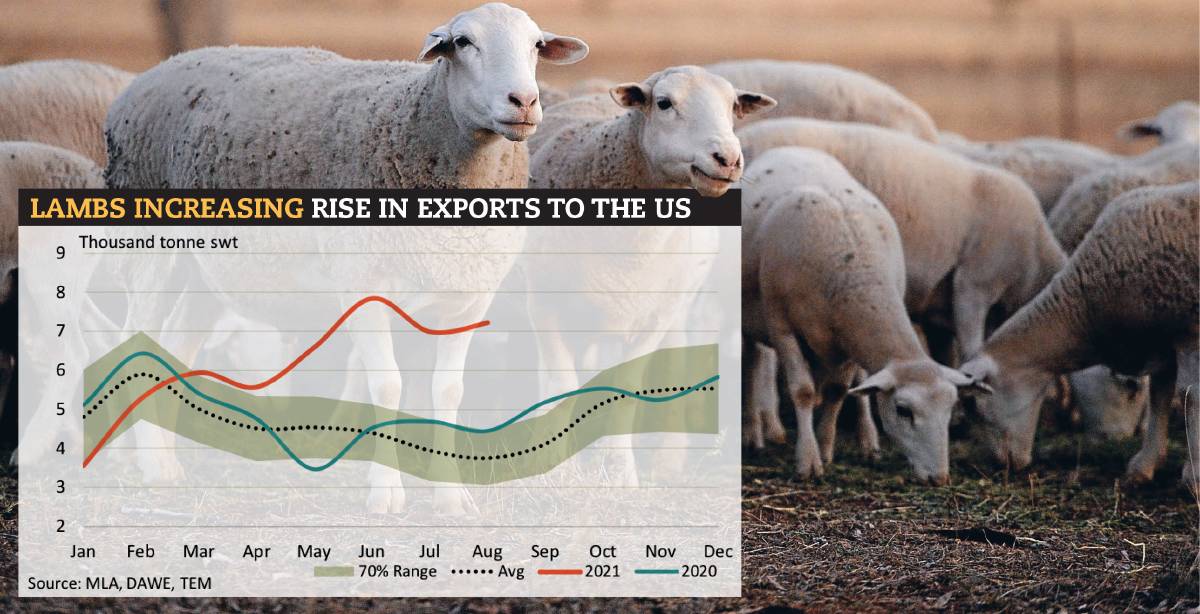 The release of the red meat export statistics for August signal the outlook for lamb exports to the US just got a whole lot better.

The already rosy outlook for Australian lamb exports to the key US market has become even brighter with reduced supply from America's domestic producers.

Lamb supply is extremely tight in the US at the moment. Freezer stocks, feedlot inventory, harvest numbers are all down.

And it is all off the back of a strong recovery in the food service demand and retail as the country opens back up after its COVID shock.

But the decline in US consumption of local lamb has been a long-term trend, likely underpinned by US production systems unable to match their Australian and New Zealand counterparts on efficiency and quality.

US lambs typically have longer turn-off times and heavier carcase weights, resulting in a fattier product.

Accordingly, the finished US product often offered different taste experiences and cut sizes to lamb from Australia or NZ.

Millennials too, it seems, have acquired a taste for our lamb, as younger diners start showing more adventurous tastes, lamb is now on 20pc of all US restaurant menus, up from 17pc a decade ago.

And the latest release of the red meat export statistics for August also highlights the US's persistent hunger for Australian sheepmeat.

According to the statistics lamb export volumes to the US lifted three per cent over August, and while this is only a marginal gain on the July figures, Thomas Elder Markets analyst Matt Dalgleish said monthly volumes have been sitting well above the normal seasonal fluctuations since April.

"There was 7219 tonnes of lamb shipped during August from Australia to the US, which represents trade volumes that are 92pc above the five-year average for August," Mr Dalgleish said.

"However, this year lamb export volumes from Australia to the US have averaged flows that are 82 above the normal seasonal trend from June to August."

But despite the firm demand from the US, total Australian lamb export volumes eased by 7pc from July to August, to see 23,222 tonnes shipped weight (swt) reported.

Mr Dalgleish said Australian mutton exports to the US have recorded their highest monthly total so far this year with 2098 tonnes noted for August.

"This is a 54pc lift on the July mutton flows, which were already 43pc above the July average levels," he said.

"The strong gains during August place Aussie mutton exports to the US 113pc above the five-year average for August."

But Mr Dalgleish said total mutton export volumes are still limited by weaker flows to other destinations (all other trade destinations other than the USA and China) with the August tally of 3656 tonnes placing the trade to other locations at levels that are 48pc under the August average pattern.

"Australian mutton exports to China lifted 57pc from July to August to see 3692 tonnes swt consigned and places the mutton trade to China at levels that are 9pc above the average seasonal pattern for August," he said.

Aussie lamb export volumes to China during August came in at 5233 tonnes swt, levels that are nearly 42pc above the five-year average seasonal trend for August.

So as consumer demand for lamb continued to grow, particularly among millennials and through the foodservice channel, Australia's foothold in the US market should provide ongoing opportunities for exporters.

The story Sheepmeat full of flavour to the US first appeared on Farm Online.