Glenlea Park stud, Keith and Pinnaroo, was again the pace setter at the 2021 Adelaide Merino ram sale topping the sale with its lot 1 ram. 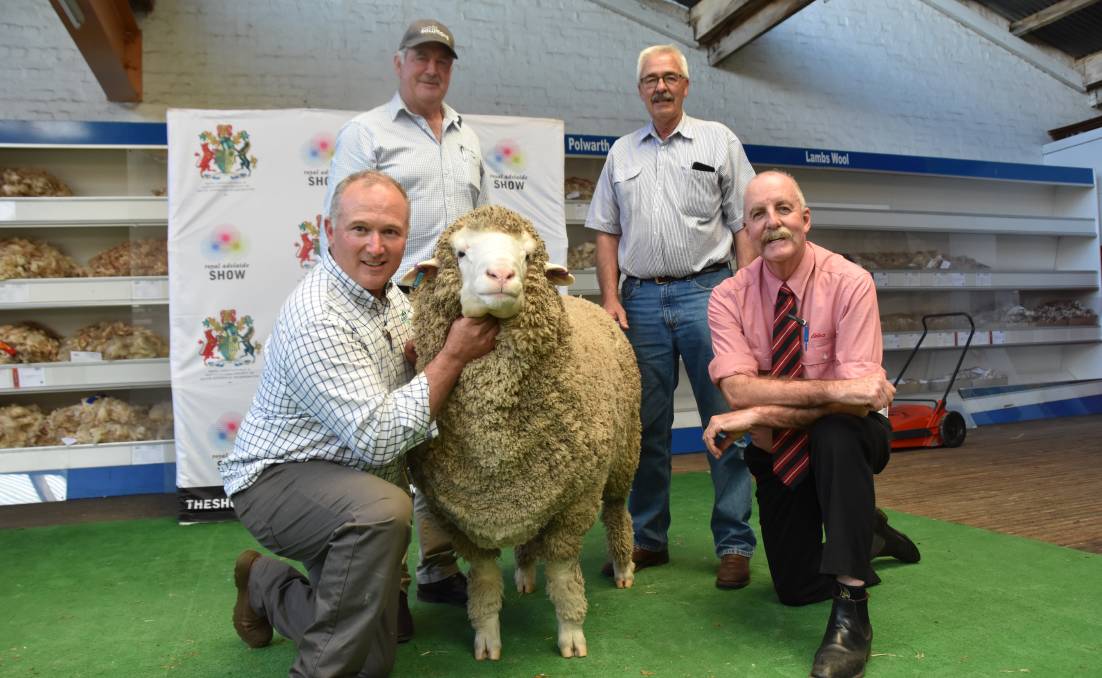 A Poll Merino with outstanding meat and wool traits from the Glenlea Park stud, Keith and Pinnaroo, kicked the Adelaide Stud Merino and Poll Merino Ram Sale off with a bang last Friday at the Adelaide Showgrounds.

Elders auctioneer Tony Wetherall described the 20.8 micron ram which was in the first pen of the prestigious multi-vendor sale as an "impact sire" and "big as a bull and wrapped in wool".

It had an exceptional eye muscle depth of 50.9mm with outstanding bone and width of barrel.

The successful buyer was Will Lynch, Boorana Merinos, Woorndoo, Vic, who also bought the $100,000 sale topper from the 2019 sale - Glenlea Park Smithy.

Mr Lynch, who had not been able to see the ram in person due to border restrictions, said he had not expected to be able to secure the lot 1 ram within his budget.

"Normally I don't really set limits if it is a ram I want but with this one I had set $52,000 and then with the semen shares I decided to have a couple of extra bids - that was my last bid though," he said.

"From what I can see he is a ram with a big, square backend and a lot of other people that have seen him have said that too, with a pretty good wool on him," he said.

Mr Lynch said Glenlea Park bloodlines had really changed his stud and commercial flocks in the past 11 years.

"In 2010 I was pretty lost about where to go next for genetics until I went for a drive to Pinnaroo and saw 004 a ram that Pete had going to Classings (Classic sale) and I bought him and he worked and then I bought 380," he said

"I am so happy that I took a leap of faith looking in SA, it has really changed our growth rates, changed the sheep and the wool quality."

For structure he is an 11 out of 10 - ANDREW CALVERT, Glenlea Park stud classer

Glenlea Park's stud classer Andrew Calvert, Longford, Tas, who bid on behalf of Boorana stud, described the sale topper as a "power of a sheep in make and shape".

"Today a lot of people have been chasing muscle and fat and post weaning weights and early growth, this is the sheep to be able to get there," he said.

Glenlea Park maintained their poll position in the catalogue topping the stud averages with its five rams averaging a sensational $21,400.

This included lot 5 which sold for $22,000 to Ravecchia Poll Merino stud, Orange, NSW.

It was one of the smallest offerings ever at the Adelaide Merino ram sale with two long-time vendors Moorundie stud, Keith and Collinsville stud, Hallett, who have created plenty of highs over the years, choosing to offer the very tops of their drafts at their on-property sales this year.

Several other studs, including three Vic vendors, withdrew their lots after the cancellation in August of the Royal Adelaide Show, which the event is usually held in conjunction with.

The Sullivan family, Greenfields stud, Hallett, received the next highest price of $23,000 for lot 35, a 21.9 M, March shorn ram in the Hussey family which has bred so well for the stud.

It was also the highest price horned ram in the sale.

Max Wilson, Wilgunya stud, Dirranbandi, Qld, put in the winning bid for the ram which had stylish, bold crimping wool.

Also bound for Wilgunya is the lead ram, lot 21, from the Michael family's Nyowee stud, Balaklava, which the Qld stud bought for $20,000.

Some of the top end bidding was more restrained with many potential buyers unable to inspect their potential buys due to border restrictions.