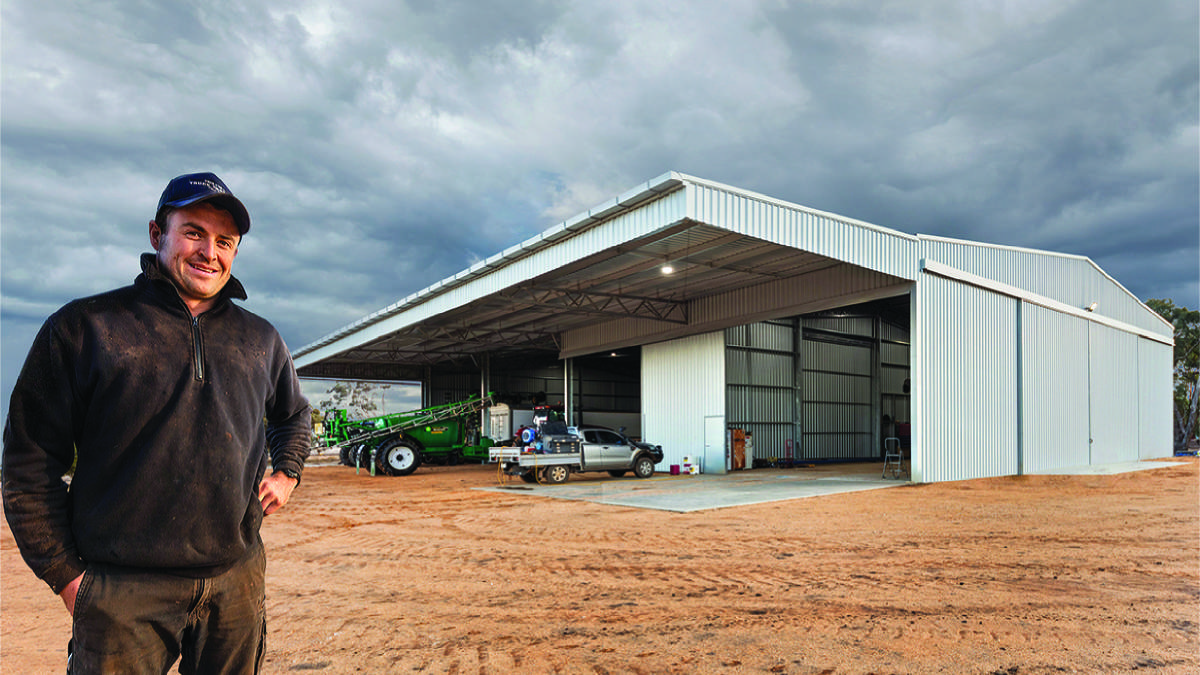 As a mechanic, Spencer Allan knows all too well the depreciation of machinery sitting outside. But in this case, the new Entegra shed is paying dividends for him personally.

It's a cold, misty and overcast early-winter's day in Victoria's southern Mallee. Cropping and sheep farmer Spencer Allan is working on a tractor in the family's new machinery shed.

He's protected from the elements, as one end of the structure is enclosed, with the rest of the shed filled to the brim with a laundry list of farm equipment. While it's "pretty tightly packed", it's all protected from the weather.

As a mechanic, Spencer knows all too well the depreciation of machinery sitting outside. But in this case, the new Entegra shed is paying dividends for him personally.

"It wasn't too bad because you get more sunny days than rainy days, but having a new shed is handy for a day like today," he continued.

"When it's cold outside, like last week and the week before, I closed all the doors and sat inside for two days. I was spoilt, just welding away.

"And then you get a hot summer's day, and we can open-up all the doors and work under the canopy. It's concreted out to the front of the canopy, we thought it was overkill at the time but now it's pretty handy."

Spencer, 27, farms with his older brother Ricky, 33, and parents Trevor and Rhonda near Wycheproof. They crop 2428 hectares and run 1500 Merino ewes and in mid-June had 600 Merino- White Suffolk lambs. In the past few years, they started lot feeding their sheep to maximize their cropping land.

Time for an update It had been more than three decades since the Allan's invested in a new farm shed. This time, they tossed-up between a machinery or hay shed. For Spencer, the decision was easy.

"We needed to do something, we had too much gear and while we had sheds, they were too spread out," he said.

"We were just sick of taking something, two, three or even five kilometres away for storage in the winter and then when you get there, there's a flat battery or you need serial numbers because you are always doing something with the GPS or something else these days. The idea was a shed that could hold all the machinery back at home."

With all the machinery close and undercover, Spencer said it's not only convenient but the shed was also a smart way to protect their investments.

"When I service it myself, I see it firsthand, the sun damage," he said about the machinery.

"The sun is probably our big one, we don't get much hail here or rain - the rain just probably washes everything - but the shed is mostly about keeping machinery away from the harsh summer sun. We see the most damage with air seeder hoses in the sun."

Protecting farm equipment from the elements makes sense to maintain its condition for use on farm, but it also helps when it comes to selling machinery.

Matt Henke, director of online marketplace Farm Tender, said buyers prefer machinery which has been stored in sheds rather than out of the weather.

"If I was going to buy something that was the same price and same hours, I'd buy the one that was kept in a shed every time," Matt said.

Sometimes machinery weather damage can be obvious, he explained, with sun bleaching and faded colours on exposed areas. But some effects can't be seen.

"You think of the monitors in tractor cabs and when they are sitting in the sun, they can be damaged, which could cost anywhere from $1000 to $10,000 because in full sun, these cabins can be sitting in temperatures as high as 60-80 degrees Celsius," Matt said.

Machinery storage differs depending on the farm region. For example, in big hay production areas like Elmore, Victoria, farmers must balance the competing needs of protecting hay and machinery.

In many cases, Matt said, machinery often went into sheds after the hay was removed. In other Victorian regions, such as the Wimmera and Mallee, machinery was protected for larger portions of the year.

Farm Tender is one of Entegra Shed's distributors. Matt said the quality of Entegra sheds stand-out compared to competitors.

"Entegra always has the hot-dipped steel frames, so there's no fading or rust and they have some of the best structural engineers going around," he said.

"It's about the quality, there's no shortcuts. I have seen other sheds with painted frames and the paint fades, and they have to be painted again," he continued, adding that investing in a shed was a good business decision.

"From my experience, banks seem to class sheds as a valuable asset as they see the benefits of protecting machinery and commodities from the weather."

Back at Wycheproof, Spencer said his family's decision to invest in a machinery shed was underpinned by the "practical" advantages the structure would deliver.

It's improving small farm efficiencies such as ease of equipment servicing and, out in the paddock, making the most of all available land, which is helping fourth generation farmers, Spencer and Ricky, push the envelope on the family farm.

Spencer's mechanic background makes him a natural fit for the machinery and cropping part of his family business. Ricky looks after the livestock. Combining the two farm enterprises will be the key to farm sustainability, especially with volatile seasons.

"Not everything is going to go your way, but if you are spreading the risk, it's a little more sustainable that way," Spencer said.

In the past, the Allan's business was dominated by sheep production. Since taking over the day-to-day farm operations, the brothers have maintained sheep numbers and increased their cropping area by introducing lot feeding.

The concept started with one pen around the house, and it has expanded to seven, including farm areas which can't be cropped.

"If we have some trees, we can't crop that, so we will fence that off and it works as good shelter especially when ewes are lambing," Spencer said.

"You want them to be happy. It's the same with the old yards around the house too. For us though, it is about making the most of the dirt we have got, we don't want too many dead spots."

Spencer believes removing the livestock from the paddocks, for most of the season, will avoid soil compaction issues.

The sheep are fed homegrown and bought-in hay, depending on the season, on the feedlot, with the addition of controlled grazing of early-sown vetch.

The crossbred lambs are sold weekly at either the Bendigo or Warracknabeal markets with target carcass weights of 24-26kg. Spencer's dad Trevor takes the lambs to market in a specially made trailer.

"We find that if we are in the market every week, we are not so disappointed when it is up one week and down the next," Spencer said.

"We are also taking them down on a Monday morning, whereas the truck comes on Sunday at lunchtime. We find they look better in their pens and probably average $10 (a head) more over a 12-month period."

The cropping program has also had a revamp, with canola dominating the paddocks - a change to the traditional wheat plantings, but a gamble Spencer is confident would benefit the business financially and agronomically. Canola has also been planted on new land the Allan's added to their farm this year.

"They have a hard clay surface, and we are hoping the canola root system will break the hard clay surface on top. Obviously, we put gypsum on first, so it's a bit of a soil conditioner, and hopefully the canola's root system can get down and loosen-up the soil. Chemicals are also cheaper to clean-up the paddock with canola, and we can get pretty good kills with the chemicals we can use."

The last two seasons of improved weather conditions and additional applications of urea yielded barley crops averaging 4-4.5tonnes/ha and 4tonne/ha for wheat. Like all farming in the far west of Victoria, drought years and unpredictable seasons aren't far away from Spencer's thoughts.

In mid-June small, weekly falls of rain were encouraging the emergence of later sown crops, while those planted in the dry were looking for a good break. It was only early days and Spencer was optimistic, after all, he's excited about building on his family's legacy.

"I grew up here, Dad and grandpa and my great uncle where farmers here, it's pretty much in my blood," he said.

"I don't feel like I'm at work. It's a good spot, as long as it rains every now and then."

The story Making the most of maintenance, in any conditions first appeared on The Land.