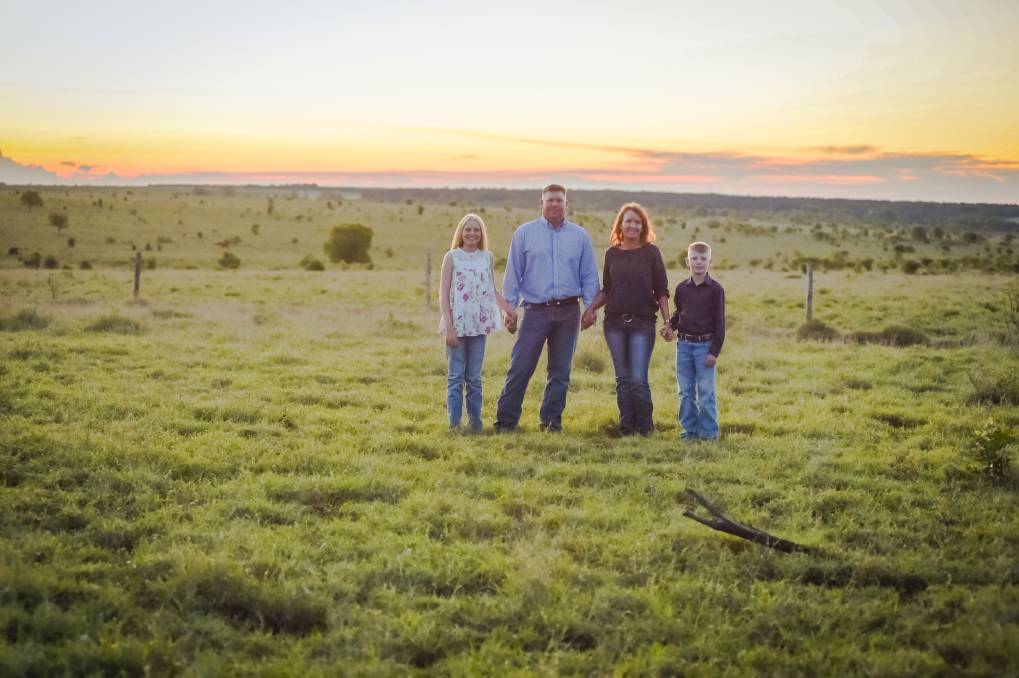 Tony and Louise Prentice and their children Lucy and Will haven't seen grass as plentiful as this for some years at their Emerald property. Photo: Kelly Butterworth

A barnstorming win at their second showing in the feed-on category of the 2021 Central Queensland Carcase Competition has cemented for Emerald's Tony and Louise Prentice that they are doing the right thing with their breeding program.

A barnstorming win at their second showing in the feed-on category of the 2021 Central Queensland Carcase Competition has cemented for Tony and Louise Prentice that they are doing the right thing with their breeding program.

The pair, who run Santa Gertrudis cattle on their property 30km east of Emerald, as well as the Jamar Santa Gertrudis stud, won both the blue and red ribbons in the feed-on class for a pen of grainfed steers in the 300-420kg weight range, plus the champion feed-on steer award, and the highest individual daily weight gain award.

They entered a single pen in 2017, the year the feed-on class was added to the CQ Carcase Classic, and decided to put the commercial attributes of their cattle to the test again this year.

"We were thrilled with the result," Louise Prentice said. "It's everything that we're about and really cements what we're doing."

The steers in their winning pen were milk or two-tooth and had liveweight entry weights ranging from 422 to 436kg.

The weights of cattle in the second-placed pen ranged from 382 to 402kg.

The champion steer, who also had the highest daily weight gain of all entries fed for 79 days at the Barmount Feedlot, scored 19 weight for age points, had a daily gain of 3.44kg and an MSA index of 56.44 points.

Its eye muscle area was 81 square centimetres and it scored 2 marbling points.

Ms Prentice said their breeding objectives were very commercially oriented and so the information received through the CQ Carcase Classic results was extremely beneficial.

When it was introduced in 2017, then-committee president Glen Kelly said the feed-on class would give producers without fattening country an opportunity to be in the competition.

"With our competition's scoring system equally conscious of carcase yield and meat quality, adding a weight gain score covers all aspects of profitability," Mr Kelly said at the time.

That was reiterated at the presentation evening in Rockhampton this year when MC Matthew Noakes described it as "a true production class".

After an induction period all entries are weighed and fed the same steam flake ration, giving a level playing field, he said.

Ms Prentice said that for both their commercial Santa Gertrudis herd and stud animals, carcase quality and weight for age were important considerations.

Grassfed production for export markets has been their focus but have been utilising a small feedlot to finish cattle in the fluctuating seasonal conditions of recent years.

"Moving forward, we may use paddocks to background and bring our cattle in at feeder weight," she said.

"It's less pressure on our grass and gives us more options.

"The carcase competition confirmed that grass then feedlot cattle are a very saleable item."