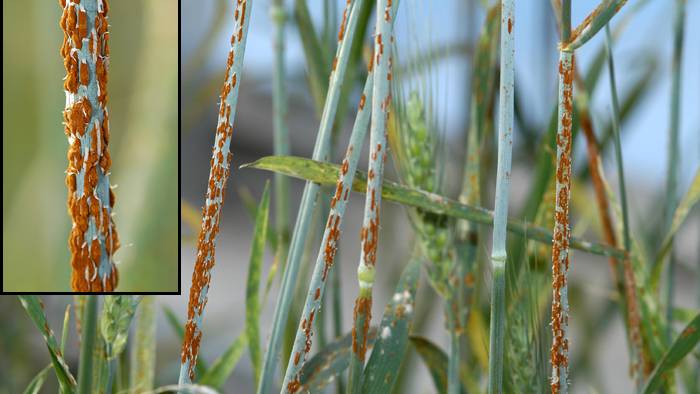 Stem rust is a serious disease in wheat.

A new gene that could help manage stem rust has been discovered.

INTERNATIONAL researchers have made a breakthrough that could help combat the damaging wheat fungal disease stem rust.

The research breakthrough involved the discovery of a gene in the disease fungus (Puccinia graminis) that triggers this resistance in the host wheat plant.

Stem rust is particularly feared within the grains industry for its ability to decimate wheat yields.

Since the virulent Ug99 strain of stem rust took hold through Africa and the Middle East in particular in the early 2000s the disease has been a priority for researchers and breeders, who have been looking to introduce more resistant germplasm into new varieties.

Peter Dodds, chief research scientist at CSIRO, said this was yet another weapon in the armoury to stay one step ahead of wheat stem rust globally.

"Discovery of this resistance gene continues our effective collaboration with international partners that has already resulted in great advances to build resistance to this potentially devastating pathogen," Dr Dodds said.

The new gene discovery will help researchers and wheat breeders to introduce multiple resistance genes into a wheat variety to build durable resistance to wheat rusts.

This novel approach to providing durable resistance has been pioneered by CSIRO and the U.S.-based non-profit 2Blades Foundation, and is bolstered through a recent demonstration of a "gene stack" of five cloned Sr genes for effective stem rust resistance in wheat.

Introducing a multi-gene stack is much more precise and quicker than conventional breeding, which can take decades to produce a wheat variety resistant to wheat rust diseases.

This new method will also ensure that the desirable trait, determined by multiple genes, will not segregate and be lost in subsequent breeding.