Ezra Cedric with the ball, Andrew Keeman on the right and Miesha Rapson on the left.

Seventy teams descended on Townsville last week to participate in the 24th annual Laurie Spina Shield, with the Normanton and Kurumba based Gulf Muddy's team joining in on the action this year.

Coordinated by the North Queensland Toyota Cowboys alongside major presenting partner and digital marketing provider Localsearch, the LSS is notably one of the largest under 11's junior rugby carnival's in Australia. This years carnival which ran from July 16-17 attracted talent from the as far north as the Torres Straits and Mt Isa, to south east Queensland alongside a huge contingent of North Queensland outfits

With a strong focus on participation, fair play and having fun on the field, this years event was played under the new Player Development Framework, which meant no scores were kept, however players were still encouraged to give their best effort on the field. 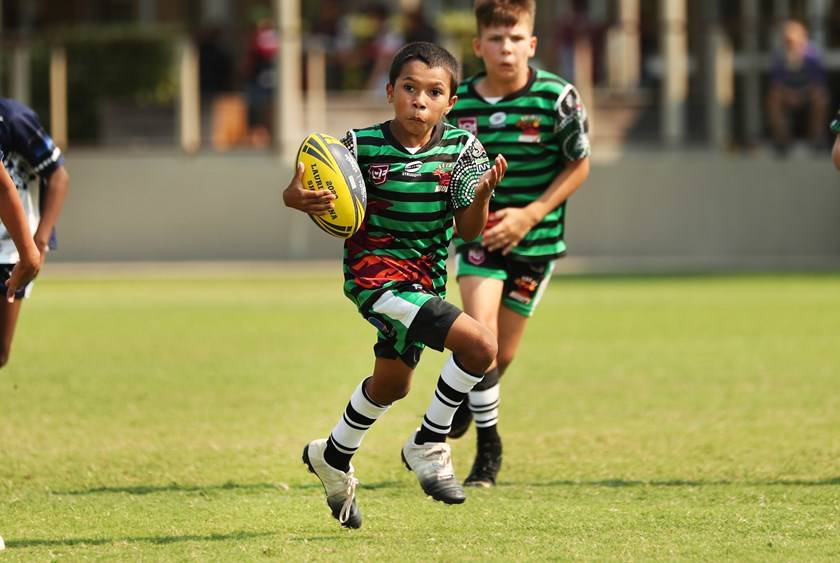 Ezra Cedric and Brody Grieve in the background.

Gulf Muddy's coach Jake Daniels said it was the teams first time playing outside of Normanton and Kurumba on a stage like this, as the kids had previously only competed against each other back home.

"We took down 12 boys and girls to compete in Townsville, and on their arrival they were fascinated by the field itself as ours is pretty solid back home," he said.

Leading up to the event, Gulf Muddy's committee secretary Melanie Scholes said the team had been training really hard and looked forward to playing against new faces.

"We hoped the kids would get to see how other teams interacted with each other on the day, exposing them to the lifelong skill of sportsmanship."

Given the high indigenous population, exposure to the game outside of their home town had been a challenge for players, making this tournament a more exciting, albeit daunting opportunity for the Muddy's to showcase their skills against other Queensland teams.

"Upon meeting the other teams, they became a little daunted by seeing other kids that were larger than them," Mr Daniels said.

"The team's goal was completion rate as we were aware that the other teams had a lot more experience together and were bolstered by larger players.

"Overall the team played with a great enthusiasm and went beyond my expectations." 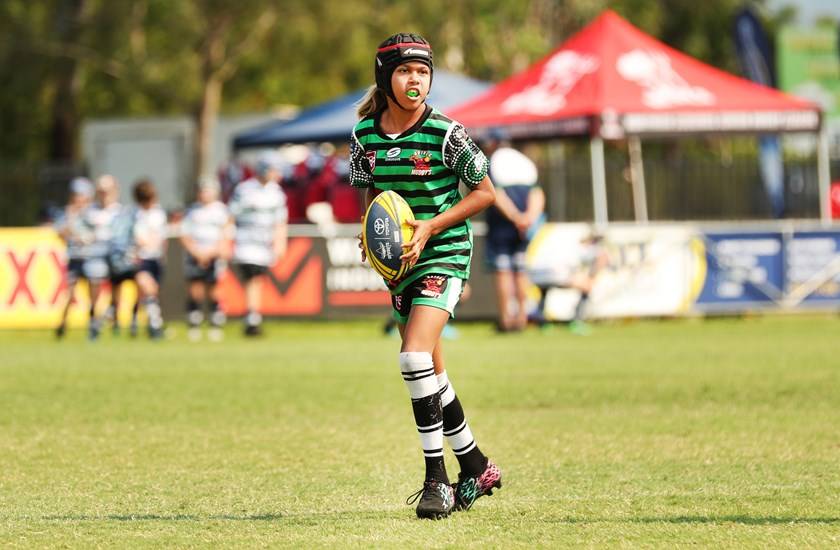 Miesha Rapson, one of the 12 players to compete at the Laurie Spina Shield.

Mr Daniels said a few injuries briefly impacted the teams confidence, however they played hard and made it through, being rewarded at the end to meet former Cowboys player Antonio Winterstein and Laurie Spina himself.

"All the kids absolutely loved the Cowboy and Roosters game after too, even though it didn't end in the outcome we hoped for," he said.

"Overall the team went well above my expectations and played very well. All were well behaved and I look forward to future trips again with these guys."

Director of digital and growth at Localsearch, Adam Boote said its important for communities to continue to support local initiatives such as this.

"We take great pride in sponsoring the Laurie Spina Shield each year, allowing the next generation of footy players to develop life-long skills like sportsmanship and fair play to take into their futures."