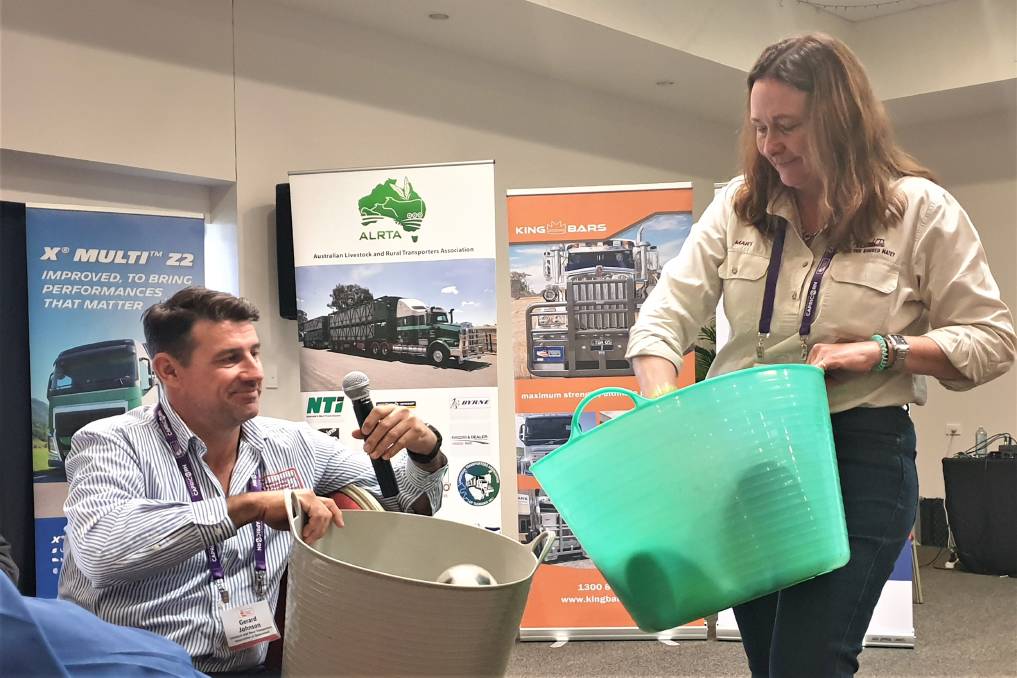 LRTAQ president Gerard Johnson helps Mary O'Brien demonstrate the importance of emptying your mental bucket and unwinding at the Livestock and Rural Transporters Association of Queensland conference at Roma.

Getting a triple road train out of a bog isn't easy but it's too valuable to be abandoned, and the same goes for the drivers who feel bogged down by life.

Getting a triple road train out of a bog isn't easy but it's too valuable to be abandoned, and the same goes for the drivers who feel bogged down by life.

Dalby's Mary O'Brien is well-known as a passionate advocate for better ways to help rural men manage depression in order to reduce suicide rates, and she left none in the audience at the Livestock and Rural Transporters Association of Queensland conference at Roma in any doubt that truck drivers were not on her radar as needing that help as well.

Describing current assistance as a one-size-all model that was not working, given that the rate of suicide among rural men was rising, she said that access to, and continuity of, support services was crucial for men in the bush.

"For men in particular, you have only one chance to capture them," she said. "A lot are not going back after one visit to professional services, so it's not working."

She believed this was because support services were designed for women, which sat men down and asked them how they were feeling.

She shared the news that the Virtual Psychologist, Dervla Loughnane had not had federal funding for her text-based counselling service renewed.

"I can't see a good reason for it - it works particularly well for men," she said. "They can say what they need to, without having to be confronted by anyone."

Ms O'Brien said truck drivers, like many in rural areas, lived an isolated existence in the cabs of their trucks for long periods, but it wasn't isolation that was the problem, it was the lack of connection.

"I urge you to keep having those toolbox meetings, or encourage social interactions - I like fishing, it gives you time to unwind," she said. "Make sure there are connections between staff."

Frasers representative Athol Carter, who led the Q&A session, said it was an important take-home for many in the audience, whose drivers might catch up round the table in the depot before starting a job and then disappear for a week or more.

Another part of the solution for men who felt alone to the extent it was leading to despair was to actively work to empty their bucket of worries and responsibilities.

"Do men things, and don't feel guilty about it - it's like putting your oxygen mask on to help yourself before you can help others."

In her very powerful message, Ms O'Brien said rural Australia was good at community, at looking after each other, citing the Burrumbuttock Hay Runners, telling the listeners they would notice changes in their colleagues before health workers did.

"Don't panic - it doesn't have to be a big fluffy conversation," she said.

"Just listen, give them the opportunity to talk.

"That's why I advocate things like fishing, where you've got a chance to unwind.

"And if you're very worried, just ask - they will be so relieved someone noticed.

"I want you all to know, you are only bogged. The wheels might spin for a bit but we'll get you out."