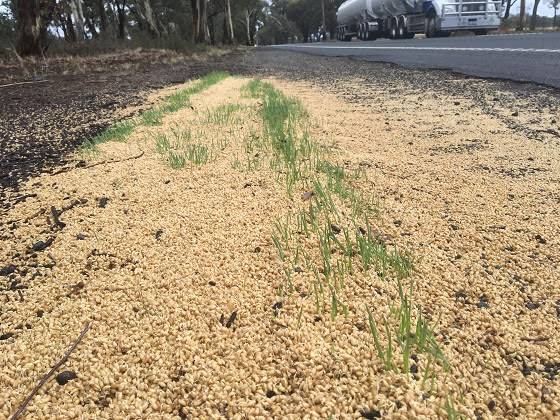 Dumped grain by the roadside on the Calder Highway. Photo: Agriculture Victoria.

Overloaded transporters are dumping grain when they have concerns about their truck weight, which causes biosecurity risks.

WITH grain prices near record prices it seems counterintuitive that people could be dumping a valuable product by the side of the road.

However, authorities have said that due to strict heavy vehicle laws that is exactly what is happening and have warned rogue transporters that cases of grain dumping will be taken seriously.

Agriculture Victoria grains industry biosecurity officer Jim Moran said that after a big production year more grain was being moved around the state.

And with GrainCorp reporting more grain arriving to its ports for exports is coming by road it means more grain trucks are operating.

Mr Moran said the dumping occurred when transporters were concerned about being overweight or when they did not have sufficient facilities to clean their trailers when backloading.

However, GrainCorp said its policies were designed to ensure trucks are always unloaded at the company's sites when they exceed the mass limit.

A spokesperson for the company said it took steps to communicate with supply chain parties to minimise the risk of the overload re-occurring.

He said the actions were in breach of transporters' chain of responsibility (COR) obligations under national heavy vehicle laws.

Most reports of the dumping have occurred along major transport corridors.

He said Ag Vic wanted to get the message out grain dumping was not a victimless crime and urged those with evidence of dumping to report it to the Environmental Protection Authority (EPA) or directly to him at Agriculture Victoria.

"Reports will be further investigated, cleaned up and referred to the relevant agency depending on the circumstances," Mr Moran said.

"Grain dumping provides an ideal pathway for hitchhiker pests - insects and diseases - to make their way to a farm where they can then become established in the grain production system," he said.

He also said with current focus on the mouse plague, piles of unattended grain were bad news.

"Dumped grain can be a food source for vermin such as mice and other pest animals which build in number and damage nearby crops and grain storages."

Later in the season he said there was the risk of disease.

"As the grain germinates it provides an ideal green-bridge for the early buildup of fungal diseases such as rusts which causes substantial yield loss."

He said getting it right in terms of weight at loading was the best way to ensure there was not a problem down the track.

"A more accurate weight reading should be undertaken at loading," he said.

This could see farmers outloading grain installing weighbridges or truck drivers using on-board, over the axles or suspension mounted vehicle scales and other visual methods that are proven to reduce the incidence of overloading (and comply with COR).

In terms of the dumping for backloading, Mr Moran said excess grain needed to be disposed of hygienically.

"If there is grain left over that needs to be disposed of, do it in a manner that does not pose a biosecurity risk," he said.

"It can be burned, buried or bagged and reused, perhaps as livestock feed if it is uncontaminated."