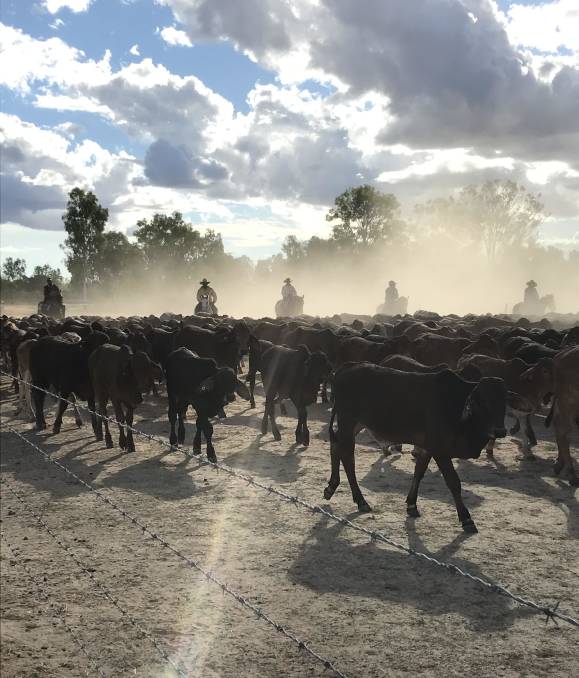 One of Australia's largest Indigenous-owned and managed properties, Delta Downs, is having a bumper season with lots of green grass and water, while at the same time enjoying the run of high cattle prices.

Delta Downs is owned by the Kurtjar Aboriginal people and trades as Morr Morr Pastoral Co, and has been managed by Quentin Rainbow and his partner Sarsha for the past two years.

Currently the property occupies an area of 4000 square kilometres and has approximately 126km of coastline frontage along the Gulf of Carpentaria.

The station is an aggregation of three pastoral leases made up of Delta Downs, Karumba Holdings and the outstation, Maggieville.

In 2011, Delta Downs suffered from the demise in the live export trade, followed by severe drought.

"We were very live export focused and found we needed to change direction and look for alternative markets to stay viable and profitable," Mr Rainbow said.

"We usually meet the market price when our steers and heifers reach the 270 to 350kg weight range.

"Over time we have supplied both the feeder and slaughter market in Vietnam and Indonesia."

Delta Downs also has the reputation of delivering lines of 1000 to 2000 head to the Charters Towers sales or for paddock sales as backgrounders for the feedlot industry.

"We keep an eye firmly on our annual budgets and market our livestock exclusively through Troy Trevor of Queensland Rural," Mr Rainbow said.

Mr Rainbow said the majority of the bulls were bought out of the paddock.

"Brahman bulls are bought from Brian and Cindy Hughes, Lane's Creek Stud, Georgetown, and Droughtmasters are from Darren and Helen Childs, Glenlands Stud, Dianne Downs, Theodore, and we buy at the Charters Towers bull sales if needed."

The Brahman and Droughtmaster cross cattle retain the uniform red colour throughout the herd.

"Droughtmaster bulls were again introduced into the breeding herd last year to add extra weight gain and for their polled genetics, while at the same time retaining uniformity of the red colour in the herd," Mr Rainbow said.

"Good temperament is a high priority and we have a preference for good quality red polled bulls," Mr Rainbow said.

After a cull for temperament and confirmation and other breeding defects, 4400 replacement heifers are joined at 22 months of age.

All maiden heifers are joined traditionally after the first of November storms while mature cows are run with the bulls all year on a joining ratio of 4 per cent.

There are two rounds of mustering at Delta Downs with all young cattle weaned at between 170 to 220 kilograms and moved to a backgrounding paddock to grow out.

All the mustering on Delta Downs is done by the station camp on horseback, without the help of working dogs, but helicopters are used.

The paddocks range from 30,000ha, while the breeder paddocks are 15,000ha and pastures include black spear grass, forest bluegrass, silky browntop and giant spear grass.

Morr Morr Pastoral operates on sound business decisions enabling expansion and development to continue while at the same time achieving significant outcomes for the Kurtjar people.

A recent investment was the quality stallion Willdraft an Acre for $30,000 at the Tamworth Nutrien Horse Sale. Delta Downs has about 30 broodmares and Willdraft an Acre, who is by Acres Destiny from Soda Justice (a Reflection mare) will be used over the best mares to upgrade the station horses.

Delta Downs employs a salaried staff of 35 and has a 12 month traineeship program in place for the Indigenous youth from Normanton.

"We take in 10 to 12 at a time and these young fellas are pretty good," Mr Rainbow said.

"Most of last year's recruits returned this year and two of the fellas have stepped up to machinery this year and are driving graders and loaders."

Delta Downs is regarded as a model for Indigenous cattle stations.