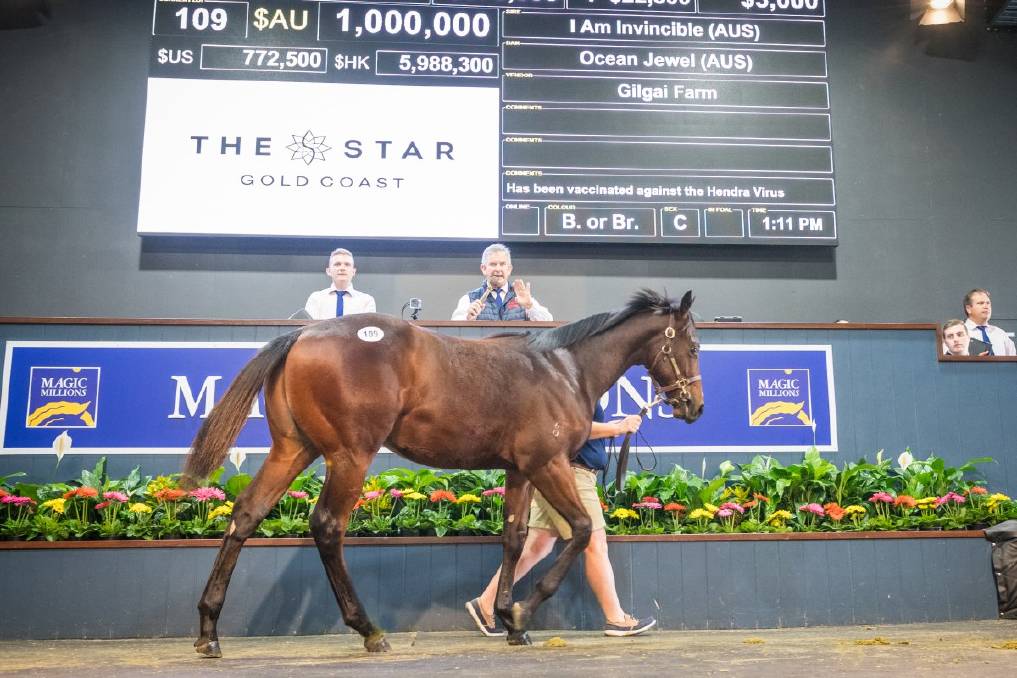 KEEN investors have kept an eye on the future and backed their judgement with some lavish outlays at the Magic Millions national weanling sale on the Gold Coa...

KEEN investors have kept an eye on the future and backed their judgement with some lavish outlays at the Magic Millions national weanling sale on the Gold Coast.

Leading Victorian trainer Ciaron Maher signed for the top lot on a successful bid of $1,000,000 the son of I am Invincible and Ocean Park's daughter Ocean Jewel.

Maher hoped to snare the youngster, which was part of the Gilgai Farm draft, for less but was happy to have him on the books nonetheless.

"That was a yearling price but he was an absolute stand out - out of a good mare and by the right stallion," Maher said, adding he'd had past success buying horses from Gilgai Farm.

"Hopefully he can develop into a good two-year-old."

Maher also picked up the tab for the Zoustar-Fundamentalist colt offered by Segenhoe Stud as agent, saying he was delighted with the acquisition.

"Fundamentalist was The Autumn Sun's sparring partner and is a daughter of Not a Single Doubt - a stallion I love and have had a lot of success with and Zoustar is absolutely flying at the moment.

"We don't have to worry about a yearling prep for him now, just get him home and grow him out.

Another son of I Am Invincible was sold to Tony Fung Investments for $625,000. Acting for Fung, Shane McGrath said the colt from Ellicazoom and off Kitchwin Hills was "lovely" with scope and size.

"He's by a serious sire and as a first foal we really liked him. His dam was a very good and could have been a Group One winner," McGrath said.

"There's a lot of substance to him and he's come off a great farm. He made his money, but he's a proper colt."

"It's a sensational clearance rate and an average of well over $100,000 and a gross of almost $32 million," he said. "The market was buoyant from start to finish."

Victoria's Rosemont Stud and bloodstock agent Justin Bahen collaborated to buy the most expensive offering in the Shadwell Stud Australasia dispersal of weanlings, paying $700,000 for Lot 73, a son of Zoustar and Bulbula.

"We've got a great client of the farm who will race the horse with us - we're searching far and wide for these good colts and hopefully they can turn into stallions for our farm in Victoria," Rosemount spokesman Anthony Mithen said.