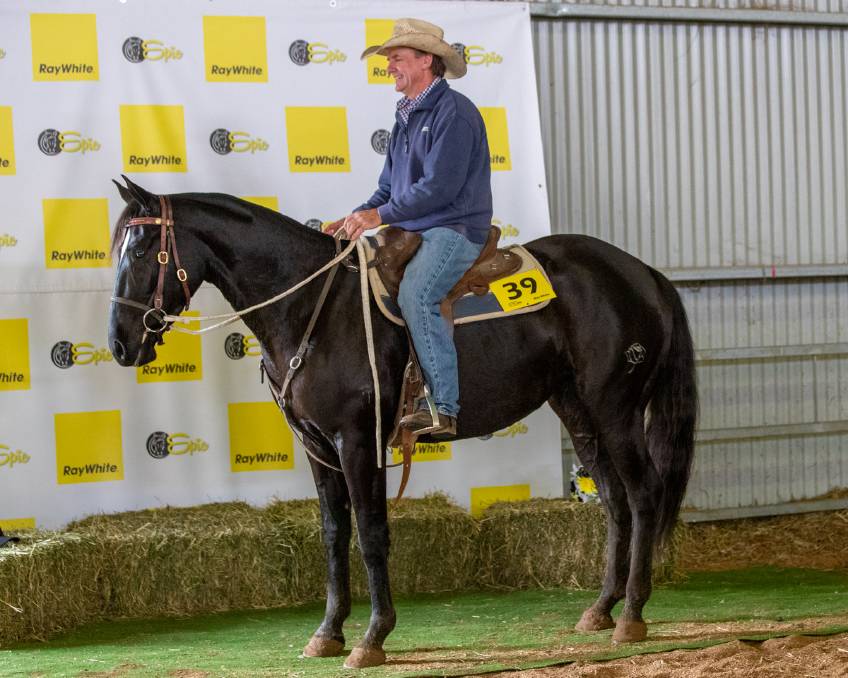 Hughenden's Drew and Sally Stevenson are the proud new owners of three-year-old black mare Hunter View Rhyme, purchased for $27,000 from Warwick and Fiona Lawrence of Rosebrook in the Hunter Valley, NSW.

Hughenden's Drew and Sally Stevenson are the proud new owners of three-year-old black mare Hunter View Rhyme, purchased for $27,000 from Warwick and Fiona Lawrence of Rosebrook in the Hunter Valley, NSW.

She was the top-selling horse purchased online at the Ray White Epic Horse Sale and Campdraft in Armidale, and the Stevensons, who own and run Benalla Stud at Monavale Station, Hughenden, were among 1000 people who viewed the event online via Stocklive.

In a first for the event, the entire sale and campdraft was simulcast, allowing enthusiasts and buyers from all corners of the nation to view the action from its new home at the Armidale Exhibition Centre.

Buyers and competitors from across the country had eyes on the prizes, helping lift the averages for mares by more than $5000 to reach a record of $10,566.

Prices peaked at $30,000 for a stylish 15-hands-high chestnut mare, One Moore Gift, offered by TC and LE McArthy and sold to Jim Lyons Agency based at Tamworth.

Blake O'Reilly, Ray White Rural, Armidale, said complementing the sale with online selling capabilities was extremely well received by prospective buyers who could view the horses in action during the pre-work phase as well as the physical sale.

The draw of horses this year was exceptional, which led to the increased prices - Blake O'Reilly, Ray White Rural, Armidale

"This surprised us all and is a credit to the vendors who presented them."

In total, more than 71 horses were offered and achieved an 86 per cent clearance rate, while 20 lots were secured through StockLive.

Mr O'Reilly said the campdraft action was taken to a new level thanks to the large quality lines of donated cattle the event's new location provided.

"The new facility at Armidale meant we were able to draw larger runs of good quality cattle which made for fairer competition as all the riders were working stock from the same line," he said.

"As we had some of the best riders and horses from across the country, the level of competition also increased and scores were running high all weekend."

Mr O'Reilly said StockLive was also a hit with campdraft spectators who tuned in to watch some of the best horsemen and women in the country go head-to-head.

StockLive had a team of operators working several cameras on the ground to provide smooth and complete coverage of the draft.

The strategically-positioned camera operators ensured horses' sheer athleticism controlling the beast at the face of the camp was captured, as well as full footage of the fast-paced outside runs.

"The attention to detail from the StockLive team, and the overall set-up, showcased campdrafting in its best form," Mr O'Reilly said.

He said the team at Ray White Rural was already making plans for next year's event, saying this year's sale had created a clear footprint for 2022.