The seven shires that claim to underpin the foundations of Queensland's beef industry have banded together for the first time to call for sufficient federal and state funds to upgrade 2000km of strategic supply chain roads.

The seven shires that claim to underpin the foundations of Queensland's beef industry have banded together for the first time to call for sufficient federal and state funds to upgrade 2000km of strategic supply chain roads.

Their Queensland Beef Corridors campaign was launched with a dinner for 80 people at Customs House in Rockhampton last week.

The several politicians in the room were told that the first 200km of their product's journey was harder than the hundreds or thousands of kilometres subsequently made through saleyards, processing plants, and to destinations on shelves overseas.

The unprecedented cross-region collaboration involved the mayors of Gladstone, Isaac, Banana, Central Highlands, Woorabinda, Barcaldine and Blackall-Tambo, described as the "G7 of beef", along with industry stakeholders and primary producers.

The seven shires are home to a quarter of Australia's beef herd and host all aspects of the beef production system - breeding, backgrounding, feedlotting, processing, and export facilities.

Both the mayors and industry representatives present at the launch emphasised that an investment of $400 million to seal missing links on partially sealed roads would see the industry move to new heights. 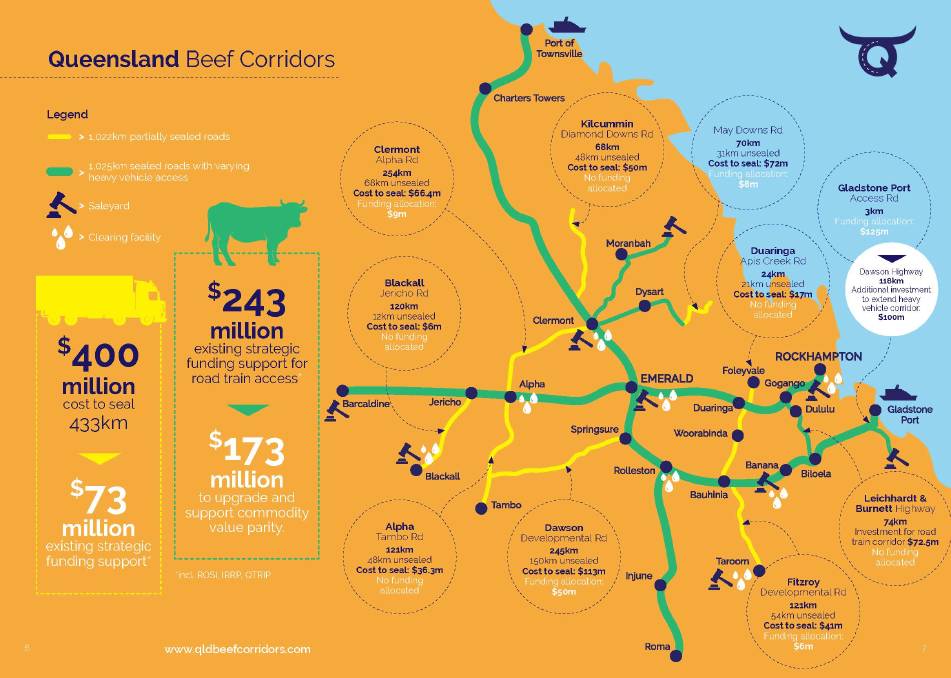 The roads marked in yellow are the corridors the seven councils would like to see more funding for.

'If we want this industry to grow and generate much-needed jobs and economic activity then we need to ensure the future health of this critical road network," Central Highlands Mayor Kerry Hayes said.

His words were supported by Alpha and Springsure graziers Fred Appleton and Bernadette Paine, with the latter saying that if the travel time for their stock from the property was shorter, it would open them up to a greater number of markets.

"The less time cattle are on a truck, the less stress they are under, so this is vitally important," Mr Appleton added.

They were backed up by Livestock and Rural Transporters Association of Queensland president Gerard Johnson, based at Tambo, who said fatigue management was a big concern for his drivers, who were constantly looking ahead for the next pothole.

"We need to keep our trucks moving to optimise our business," he said.

Stressing the problems with bulldust and corrugated dirt roads, Teys Australia's Biloela general manager, Ethan Mooney said the most important thing to understand was that everyone was working with a depreciating asset and the minimum time it was on a truck the better.

"The MLA has its carbon neutral by 2030 target - it's not being helped by throwing money out the window because of the state of the roads," he said.

Banana Shire Mayor Nev Ferrier pointed out that there were three meat processing plants in the region, two in Rockhampton and one in Biloela.

"Between them they employ about 2000 people and rely on delivery of up to 3000 head per day," he said. " We need to be able to get road trains from western central Queensland to the Gladstone Port via the Capricorn, Burnett and Dawson Highways via Dululu, Biloela and Gladstone." Also commenting on the night was Harry Kemp of Lotus Park Feedlot on the Marlborough-Sarina Road, who said his business was built around scheduling deliveries.

"The road network is the foundation of our business," he said, relating their circumstances when Cyclone Debbie cut their road access for a considerable time.

"There are a couple of feedlots on the road and they all had cattle that needed to be fed - to only have a week of feed left was pretty stressful," he said. "It highlights the importance of roads and how fragile the network is."

In response to Springsure grazier Christine Rolfe's comment that it would make a big difference to have type two roadtrain access in central Queensland, Mr Johnson told the audience that breaking down loads took drivers on average an hour to an hour-and-a-half.

Asked whether they had a priority list, Gladstone Mayor Matt Burnett said no one section was more important than the other, commenting that funding a road in the Blackall-Tambo region ultimately brought cattle to his port.

"We've picked the priority - it's beef," Barcaldine Mayor Sean Dillon said. "Tonight is about endorsing that and delivering over the next five years."

Mr Mooney said everyone understood Beef Corridors' aims of an efficient, strategic and structural funding solution to futureproof the high-value commodity would take years to deliver, but he reminded diners that billions of dollars had already been invested privately to give the region a cutting edge meat processing industry and supply chain.

"We sell meat to 50-plus companies - it's easy to get it from Biloela to Brisbane and overseas; the hardest part is the first 200km," he said. "Collaboration means government has to come to the party, you've got to give something to this story." State Agriculture Minister Mark Furner was among the 80 guests who watched the presentation at Customs House in Rockhampton, underscoring the critical role trade has always played in the region.

"Rockhampton mayor Tony Williams has acknowledged that if we are successful, his council will be a beneficiary," he said.

Saying that the idea had started from the government's regional forums, Mr Furner said the night was about starting a conversation with governments.

"We clearly understand the importance here - this is an outcome we need all levels of government involved in," he said. "I congratulate you. Make sure you keep your voices loud and the Palaszczuk government will keep working with you."