Bartle Frere Banana growers Bernie and son Gavin Daveney are questioning why it took too long to declare Cylone Niran a natural disaster. 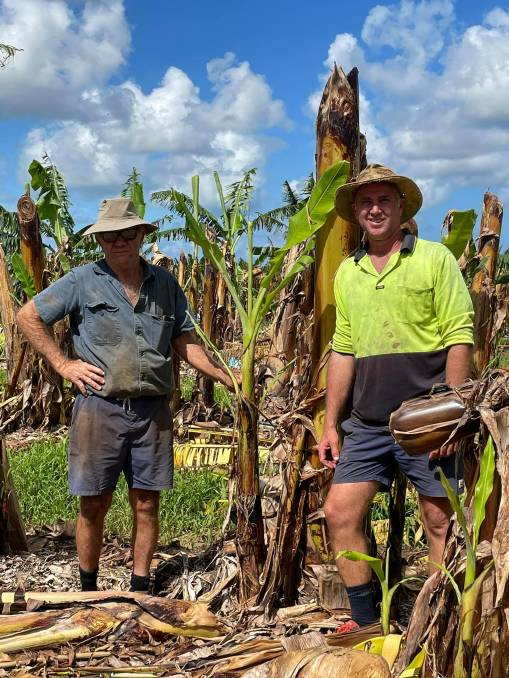 Bartle Frere Banana growers Bernie and son Gavin Daveney are questioning why it took an additional day for TC Niran to be declared by the Bureau of Meteorology.

Banana crops across the Cassowary Coast and northern Tablelands have been impacted, with some properties around Innisfail reporting losses of up to 100 per cent.

The devastation comes on top of years of low prices and severe worker shortages caused by COVID-19.

Gavin Daveney, and his parents Bernie and Sandra, grow bananas on 100 hectares at Bartle Frere and employ about 30 locals from the Cassowary Coast region.

Mr Daveney said his family and many of his neighbours are questioning why it took an additional day for Tropical Cyclone Niran to be declared by the Bureau of Meteorology.

The most frustrating thing is that there was no true indication of it coming and we had no time to prepare. - Gavin Daveney

"The storm dropped power lines, split trees and all the kids were still at school.

"There were no warnings, no radio warnings, and people were still driving around in it.

"The cyclone had come and gone and then they named it, and then it didn't turn into a category one until it was off the coast of Cairns."

The Daveneys lost from 20pc to 90pc of their crops depending on the growth stage of the plant.

"Depending on the stage of the paddock, anything that was fully hanging and fully bunched up is about 95pc damaged," he said.

"Paddocks that didn't have any bunches hanging in, have probably got about 20pc damage in it.

"We literally won't have an income for quite a long time.

"You're left in an industry that due to COVID is struggling with employees, you're paying above the odds for anyone you want to keep.

"We spend a fortune trying to mitigate these problems and it's all based around information and government, and there's nothing forthcoming."

Mr Daveney said with prior warning, the family could have brought their crew in on Sunday to top the trees.

"We were told the storm would head south and not affect them," he said.

"As a precaution, we started topping the trees but it wasn't enough time - we only had three hours - whereas in the lead up to Cyclone Yasi we had days.

"Even if it doesn't hit the coast, we actually prepared ourselves for damage."