Banana grower Charles Camuglia, who has lost 100 per cent of his crop, surveys the damage on his farm. Picture supplied.

In the wake of visits to cyclone-smashed banana farms in the Innisfail region by state and federal Agriculture Ministers and the state's opposition leader, the Australian Banana Growers' Council has welcomed the first steps towards recovery assistance but is calling for specific measures to be activated.

In the wake of visits to cyclone-smashed banana farms in the Innisfail region by state and federal Agriculture Ministers and the state's opposition leader, the Australian Banana Growers' Council has welcomed the first steps towards recovery assistance but is calling for specific measures to be activated.

After inspecting the aftermath and speaking with farmers on the ground near Innisfail last week, opposition leader David Crisafulli said the situation was dire with labour shortages compounding the problem.

"These farmers want short-term help, while in the long term they want an end to the issues with workers," he said. "They're not asking for any special treatment."

Queensland and federal governments have made the first moves to activate Disaster Recovery Assistance for banana growers affected by last week's cyclonic storm but the ABGC said low interest loans were unlikely to be taken up by most impacted growers.

Instead, they are looking for Special Disaster Assistance Recovery grants, up to $25,000, to assist growers with cyclone clean-up costs and to assist in getting crops back into production.

"Prior to last week's cyclonic event, these growers had been trying to get as many workers as possible - still not enough due to COVID - and now they're concerned that they won't be able to continue to pay them, or find them again, once they have rebuilt and are back in operation," he said.

Both federal minister David Littleproud and state minister Mark Furner have inspected the crop damage firsthand and have been told it would affect production and viability for the next eight to 12 months. 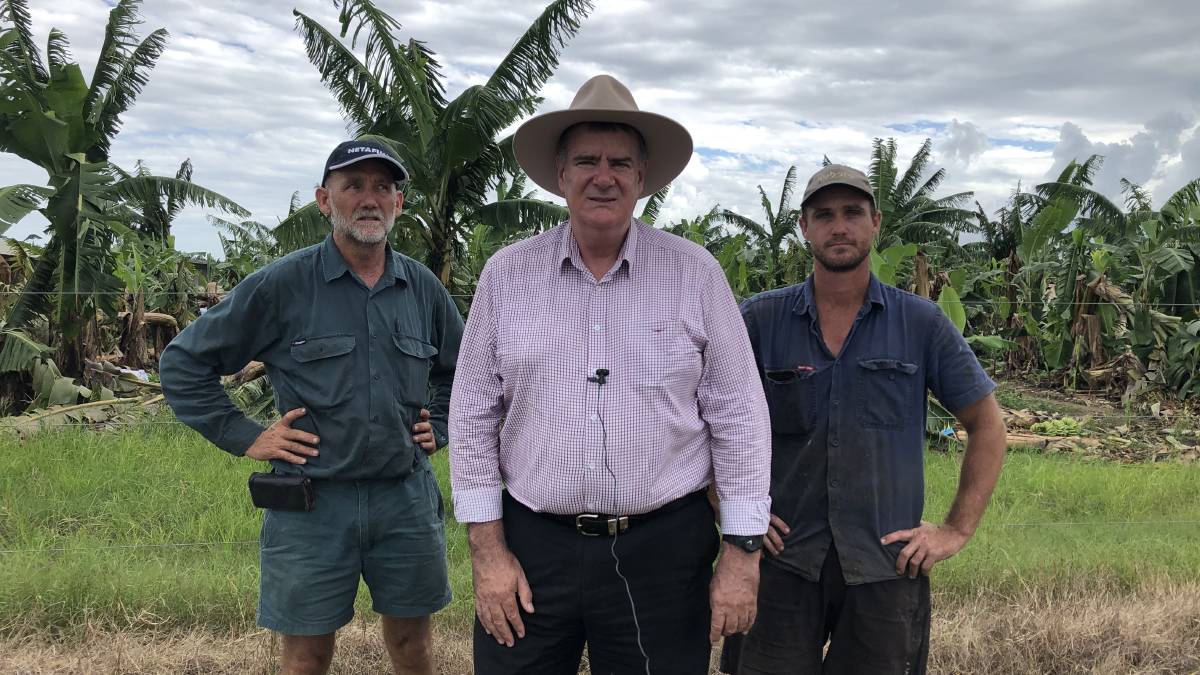 Without some form of disaster funding or staff retention assistance some of these growers will not be in a position to fully recover or rebuild, Mr Lowe said.

"The agriculture industry has helped hold the fort for Australia during the COVID-19 pandemic, keeping local produce on shelves without a great deal of price movement," Mr Lowe said.

"We are hoping governments recognise this and respond with assistance to those who need it the most to help rebuild and maintain our workforce."

In order to activate recovery grants, the Queensland Premier must formally put a case to the Prime Minister for approval.

Crop loss assessment data gathered by the Department of Agriculture over the past week, with assistance from ABGC, is now being considered by the state government.

In his visit to the Innisfail region on Saturday, Mr Furner said the state government "will be working with the federal government to make sure the appropriate assistance is available to help these farmers out".

He used the occasion to call on consumers to support banana farmers "doing it really tough" by buying Queensland bananas.

It was a point emphasised by Mr Lowe as well, saying the best thing Aussies could do for the industry right now was to keep buying bananas.

"Remember, we've had some rough times in certain parts of the growing area. If you see a banana on the shelf that's got a slight mark on it, pick it up - it'll still be great on the inside."