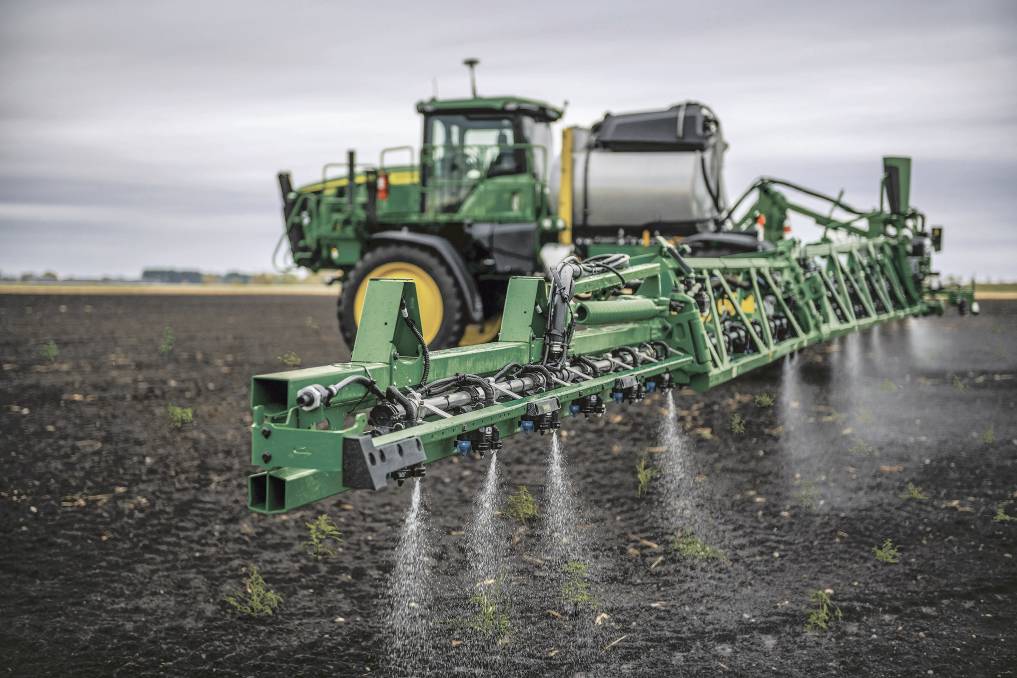 John Deere has announced the release of new sprayers and spraying technology and updated tractors and air seeding tools.

John Deere has unwrapped a big bunch of new goodies including new spraying equipment, improvements to its 9 Series tractors and updates to its air seeding tools.

He said See & Spray Select advanced spraying technology would be available on the new John Deere 400 and 600 Series sprayers.

As well, a new lineup of Hagie self-propelled sprayers would include three models.

Key updates had also been made to air seeding tools including the addition of the John Deere Relative Flow blockage detection system, TruSet in-cab downforce adjustment and quick change blades. 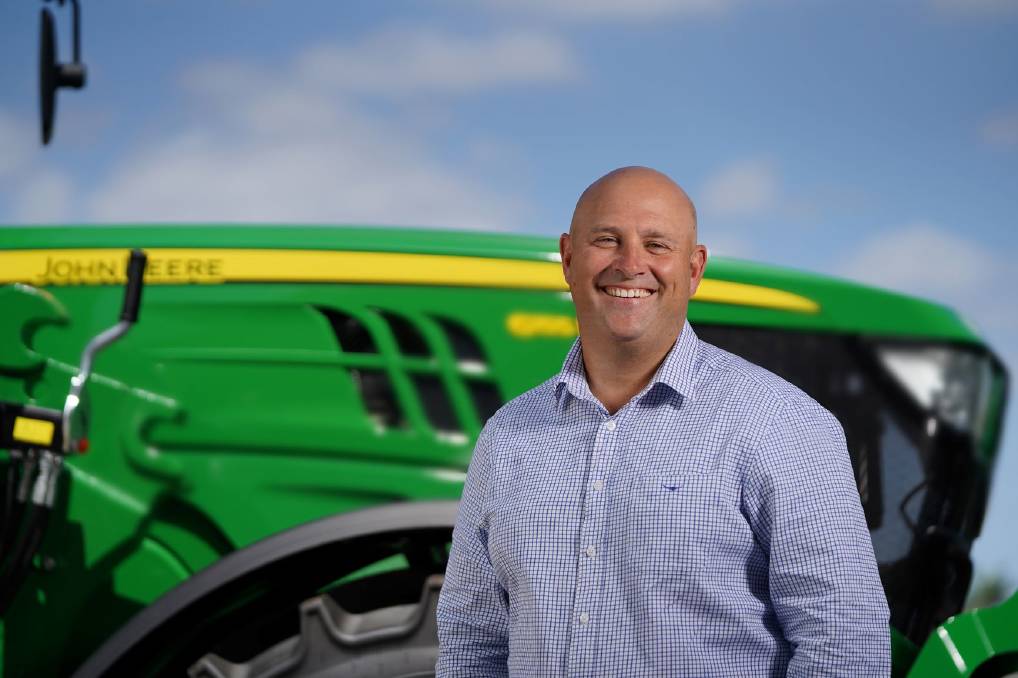 "The 9 Series tractors can be ordered from late March while the (updated) 8 Series tractors, sprayer offering and seeding tools will be available to order by mid-2021," he said.

Mr Chandler said three new 400 (408R, 410R and 412R) and two new 600 (612R and 616R) Series sprayers had been introduced to deliver enhanced operator comfort, high-quality application and the most machine uptime possible with tank sizes ranging from 3000 to 6000 litres, depending on the model.

A new boom re-circulation feature ensured liquid solution was kept in suspension so the boom was always primed and ready to spray while the air purge system enabled improved clean out to save time and reduce waste.

Mr Chandler said the 400 and 600 Series sprayers had fuel-saving CommandDrive powertrains that reduced engine revolutions to save fuel while maintaining a consistent speed and spray pattern.

John Deere was also offering See & Spray Select, an integrated camera technology that treated weeds only when they were detected. 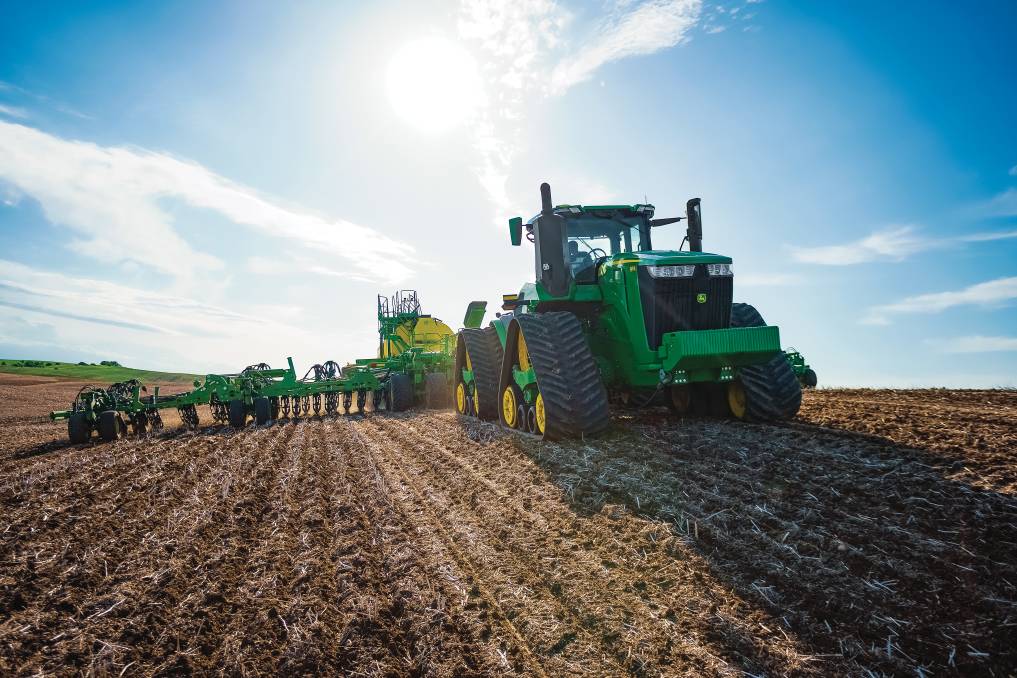 The technology was developed in partnership with the University of Southern Queensland and allowed farmers to apply more expensive and complex tank mixes more efficiently as well as being able to switch from targeted to broadcast spraying without leaving the cab, he said

See & Spray rapidly detected only green plants in fallow ground and triggered an application to those plants which could cut herbicide usage by 77 per cent.

"Research has shown that weeds sprayed with complex tank mixes with more than two modes are 83 times less likely to develop resistance," he said.

An all-new lineup of three Hagie self-propelled sprayers (STS12, STS16 and STS20) were available with tanks sizes ranging from 4500 to 7500l capacity.

CommandDrive monitored wheel slip and also came as standard while all wheel steer technology kept tyres in the same set of tracks while turning on headlands to reduce crop damage.

To accommodate the added horsepower and ballast of the articulated 9 Series tractors, several undercarriage, axle, and front-frame components had been strengthened and improved.

This had increased the weight of the tractor and the maximum available ballast from 27,200 to 30,300 kilograms to put the enhanced power of the new lineup to the ground.

Mr Chandler said Deere offered a number of models across the 8R, 8RT and 8RX lineup ranging from (171kW (230hp) to 305kW (410hp) along with multiple transmission options.

A central tyre inflation system saved time when adjusting the pressure required for field and transport operations by changing tyre pressure when "road" or "field" settings were engaged on 8R tractors equipped with Independent-Link Suspension.

New integrated 3750l capacity ExactRate tractor tanks on the 8RX tractors provided additional liquid capacity for tasks such as liquid fertiliser application while seeding and planting, enabling more time in the field and greater productivity by reducing the number of fills required.

Key updates for the model year 2022 lineup of air seeding tools included the addition of the John Deere RelativeFlow Blockage detection system to help farmers ensure product is being accurately and evenly distributed during seeding.

It improved seed-to-soil contact, plant emergence and maturity and helped operators to maximise uptime in the field compared to manually adjusting downforce at the tool, he said.

John Deere will offer an enhancement to its ProSeries openers with the addition of new quick-change blades which can reduce the time it takes to change opener blades by up to 45pc.