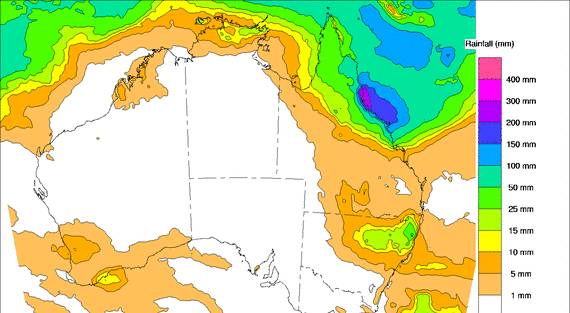 It's going to be a wet weekend in North Queensland as tropical low which has the potential to turn into a cyclone strengthens.

A low pressure system dumping heavy rain across North Queensland has a moderate chance of forming into a cyclone early next week.

A LOW pressure system dumping heavy rain across North Queensland has a moderate chance of forming into a cyclone early next week.

The system, which is currently sitting off the coast of Cairns, is bringing heavy rain to the region, with 116mm of rain falling at Clyde Road, near Mission Beach until 9am today.

Bureau of Meteorology meteorologist Johnathan How said there was a 20 to 50 per cent chance of the low forming into a cyclone on Monday.

"We're monitoring a tropical low in the Coral Seas as it drives heavy rain across northern Queensland," Mr How said.

"Conditions are favourable for it to develop into a tropical cyclone next week but there is still some uncertainty about its movement and development and where we will see the heaviest rain.

"The system is sitting north east of Cairns and for now isn't much more than mass of cloud and thunderstorms but it is poised to become more organised and strengthen over the coming days."

Mr How said large rainfall totals have been building along the coast in the last 24 hours, adding to the 200mm-300mm recorded over the last week.

A flood watch has been issued for the coast between Mission Beach and Rollingstone, and this is expected to expand to include Townsville and surrounding areas over coming days.

"Catchments there are already saturated following last weekend's flooding and will respond quickly to further rainfall," Mr How said.

"Rainfall will ramp up through the weekend, at first focused around the coastal strip and by Sunday we could see heavy falls develop and extend inland.

"There is still uncertainty into next week and actual totals will depend on how the low moves.

"Computer model guidance shows the low staying fairly stationary over the Coral Sea where warm sea surface temperatures above 28C will provide plenty of fuel for its development, however a limiting factor will be its proximity to land."