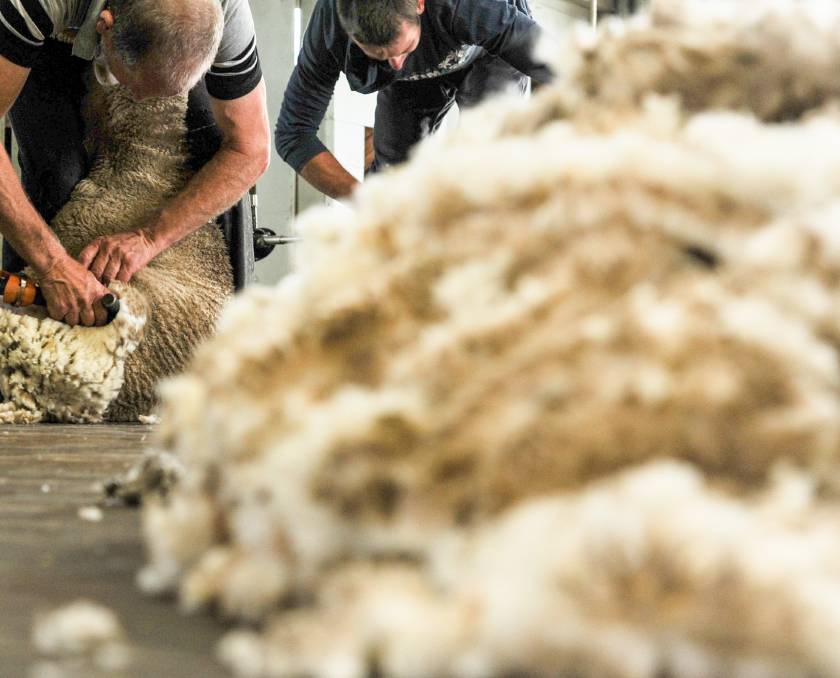 Buyers drove up the Eastern Market Indicator by 43 cents to 1318c/kg clean, its highest point for almost a year.

Buyers continued to target fine and medium wools at auctions around Australia this past week to drive up the Eastern Market Indicator by 43 cents to 1318c/kg clean, its highest point for almost a year.

Nutrien Wool analyst Anthony Boatman said it was another positive week for the Australian wool industry driven by lively bidding for wool between 18 to 21 microns.

All centres strengthened as the week progressed with all sectors, except oddments, posting price gains.

The national offering was smaller at 46,000 bales, down by 3761 bales, with 9.7 per cent passed in as growers took advantage of the rising prices.

Australian Wool Innovation said in its analysis of sales the gains had even gone against the usually dampening effect of a stronger Aussie dollar against the $US.

As such the USD EMI appreciation was even greater at 3.6 per cent higher to 1022usc clean/kg.

"Similar to the Aussie dollar levels, the USD wool value indicator has not seen these levels since the full effects of the pandemic hit our markets in late February/early March of 2020," AWI's analysis noted.

"Requests for wool from China were reportedly slowing at the commencement of these sales. The Lunar New Year celebrations may have had an influence.

"Despite the apparent waning in appetite for new business from the PRC, discussion from show floors arrived of fresh enquiry and conversion to forward contracts from India. Many buyers commented how easily this competition transferred price pressure onto all users as levels ascended."

Crossbreds appeared to turn the cheapening trend for the time being and traded up to 20 cents dearer. Cardings defied the dearer trend of the general market and fell away by 20 cents.

All Merino fleece microns increased in Sydney on Tuesday, gaining between 20 and 40 cents, with broader MPGs over 18 microns making the greatest gains.

This trend continued on Wednesday with further prices rises (up to 50 cents) for the broader end.

Finer crossbred lots below 27 microns gained 20 to 30 for the week, broader lots were unchanged. 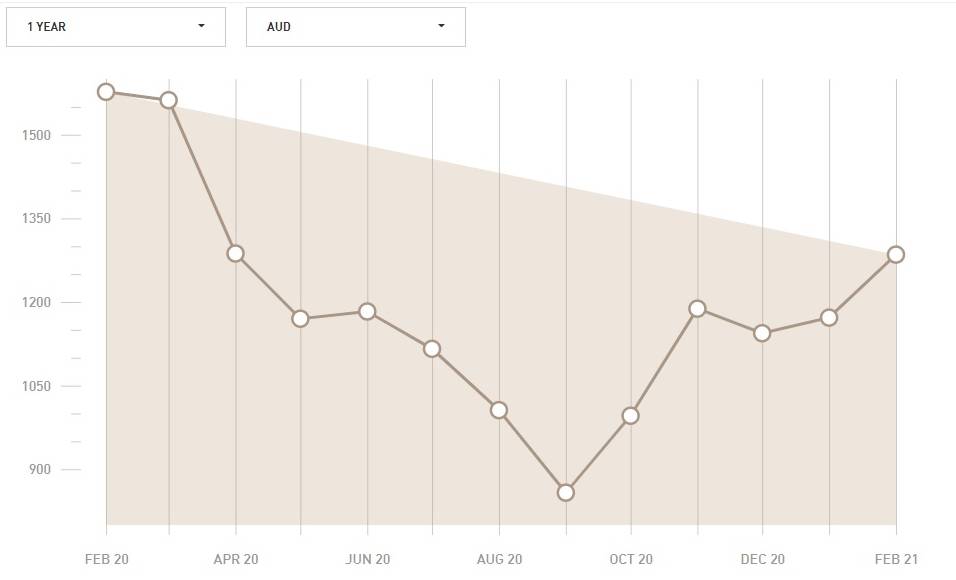 The EMI jumped 43 cents to 1318 c/kg clean, its highest level for nearly a year. Graphic: AWI.

The Sydney pass in rate was 10.8 per cent with 390 bales withdrawn.

The broader MPGs were also in favour on Tuesday in Melbourne rising between 35 to 45 cents.

Wednesday's sale produced more of the same before the Merino fleece sector consolidated on Thursday.

The Merino skirtings market opened strongly on Tuesday before softening as the day progressed.

The crossbred sector was steady on Tuesday as poorly prepared lots failed to attract buyer interest and were passed in.

However, the sector kicked upwards on Wednesday and Thursday.

The oddment sector weakened on Tuesday and was unchanged on Wednesday before weakening on Thursday as high VM types were out of favour.

The Melbourne pass in rate was 9.3 per cent with 1784 bales withdrawn.

The Fremantle market followed the lead of the Eastern markets with price rises across all Merino fleece MPGs on Tuesday and Wednesday.

Merino skirtings trended downward on on both sale days this week.

The oddment sector eased lower on Tuesday, down 10 to 20 cents before firming on Wednesday.

The Fremantle pass in rate was 9.4 per cent with 485 bales withdrawn.

Meanwhile, the latest ABS data on Australia's wool exports shows the volume of exports lifted sharply in December, by 38 per cent year-on-year.

But the value of wool exports fell, by 29 per cent.

The lift in the volume of exports was due almost entirely to a 61 per cent jump in the volume of wool exports to China, according to the National Council of Wool Selling Brokers of Australia.

"Exports to almost all of the other top 10 destinations recorded significant declines for the month," the council reported.

China accounted for 87 per cent of Australia's wool exports by volume in December, and for 86 per cent of the value of exports.

Almost 53,000 bales are to go to auction this week as held wool hits the market.

The story Wool prices the best for almost a year first appeared on Farm Online.