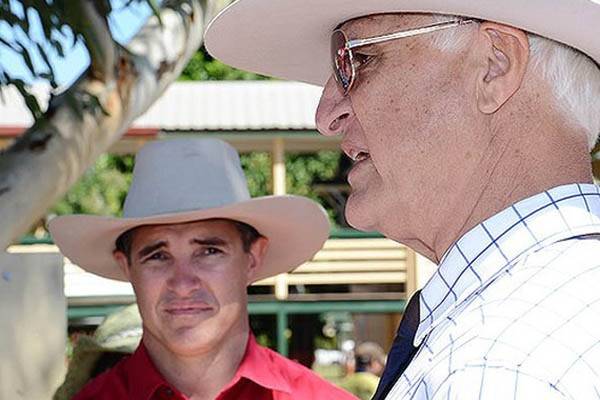 The Katters will welcome the Australian Survivor crew to Cloncurry.

The next series of reality television show Australian Survivor will be filmed in the heart of Katter country - and the man in the hat reckons it will take grit for contestants to tackle the outback.

THE next series of reality television show Australian Survivor will be filmed in the heart of Katter country - and the man in the hat reckons it will take grit for contestants to tackle the outback.

The Cloncurry born and bred Kennedy MP Bob Katter welcomed the opportunity to showcase the outback town to the rest of Australia.

"My father was the mayor of Cloncurry for 24 years or something and he said every week, I want Cloncurry in the national news - good, bad or indifferent and I think he was dead right in that aspiration for the town," Mr Katter said.

"Cloncurry is the centre of Australia and this will give us a lot of notoriety."

Mr Katter is angling to make a cameo on the show.

"I will be volunteering to sing of course... I'm naturally a very humble and shy person, to it will be hard to do that," he said.

He suggested contestants may struggle to survive in the outback.

"Depending on when the show is filmed, crocodiles will probably have arrived at Cloncurry by that time, as they're moving up all the rivers," Mr Katter said.

Premier Annastacia Palaszczuk said it was expected the filming of Australian Survivor would inject $14.6 million into the state's economy and create about 150 jobs for Queensland crew.

Screen Queensland CEO Kylie Munnich said Cloncurry would benefit from jobs for local crew and be showcased nationally and internationally on the program.

"It's rewarding to see such a big show as Australian Survivor heading to outback Queensland - a region that knows adversity and hardship first-hand, and whose people, I expect, share those human qualities celebrated in the show: courage, endurance and strength," Ms Munnich said.

"From urban centres and coastal ranges to sweeping outback plains, Queensland has enormous capacity to cater for a wide range of screen productions-from international features through to reality juggernauts like Australian Survivor."

"Moving from the beaches of Fiji to the outback of North Queensland will shift the game in a way we haven't seen before," Ms McGarvey said.

Endemol Shine Australia CEO Peter Newman said they looked forward to showcasing Cloncurry's unique beauty to audiences both in Australia and around the world.