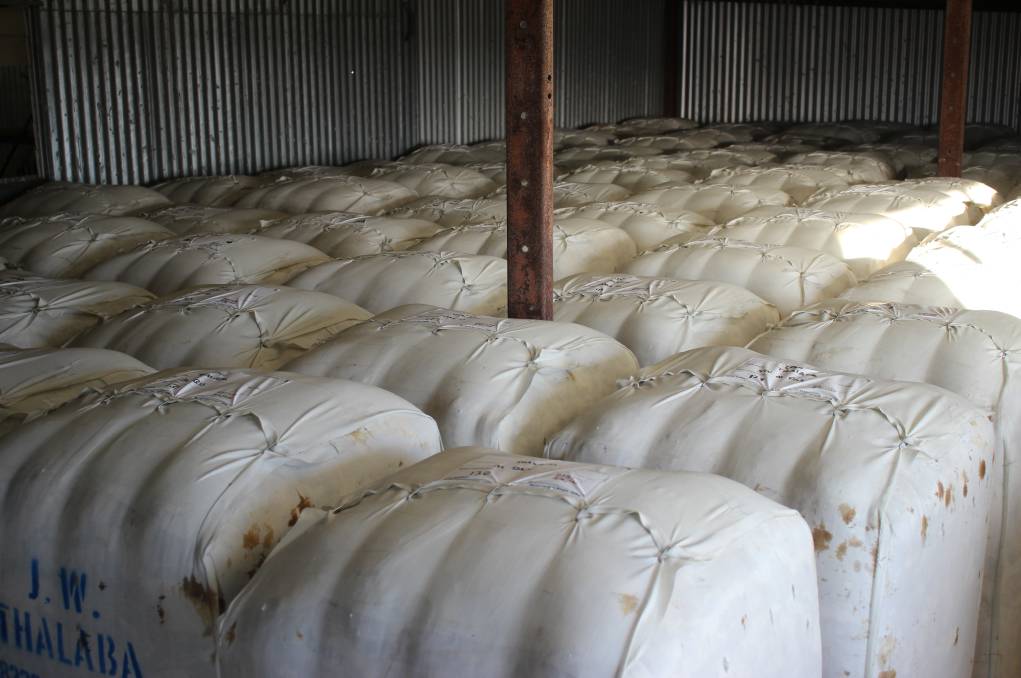 As well as growers holding some wool stocks on-farm, part of the clip being bought at auction is also going into stock somewhere around the globe.

Predicted increase in wool demand for March-April should help to clear some stocks.

Buyers sat and watched each other for the first hour or so of each wool auction day last week to see who would blink first.

When the market didn't drop as much as expected, they jumped in and - although they tried not to push it higher - prices did not fall much either.

Some of the trade was expecting a more significant price correction.

But the mood around the world is such that nobody wants to be caught short.

So, it was better to buy something and be able to trade it later rather than come back empty-handed at the end of the week.

Demand from further up the supply chain is still less than expected, or needed, for this time of year for this amount of wool.

So, a portion of the wool being bought at present is going into stock somewhere around the globe.

Nobody is complaining about their stock levels, so these have not reached uncomfortable levels yet. It appears there is still a buffer being built for the anticipated increase in demand in March-April.

The superfine end of the clip continued to set the pace at auction sales last week, with anything measuring less than 16.5-micron having buyers lining-up at the door.

Superfine knitwear demand is continuing to dominate the thought processes of buyers.

Given a 16.5-micron cashmere top at present will cost you around Euro100 per kilogram, or $150/kg, a decent superfine Merino top with better length - and potentially even finer micron - at $30/kg is still very affordable.

The concentration on the superfine end of the market is stretching the financial capacity of some buyers and exporters and, with many businesses in China now closed for two weeks, the flow of funds from customers in China to greasy wool exporters in Australia and South Africa is drying-up.

This will require some careful money management in the next couple of weeks, as buyers in the auction rooms are still required to pay cash for their purchases by the following Friday after the fall of the hammer.

Even though China will have official holidays from February 11-17 - with actual Chinese New Year on February 12 - indent orders will still be in the market during the next two weeks.

Some mills have closed already; some will close for up to four weeks; and some will not close at all to avoid workers returning from other provinces having to quarantine for 14 days.

The mobile phones and WeChat will still be switched on and keeping tabs on the wool market, especially for those who have skin in the game via stocks on hand.

Principals of processing mills are watching stock forecasts and wondering what the supply will do.

Wool auction sales for the season to date are up a tad.

So, in theory, there could be a big hole in supply coming up.

Of course, an unknown quantity of wool is being shorn and held on-farm.

When this wool comes into store, it will be tested and added to published figures.

But, until then, it remains an anecdotal guesstimate of the gap between sales and the National Wool Production Forecasting Committee estimate of just over a 1 per cent increase for this season - leading to possibly 9 per cent of the annual clip lying on-farm.

If this 9 per cent of the woolclip doesn't come into the system in the next few months for whatever reason, there could be a squeeze on supply - especially at the superfine end, iwhere good seasonal conditions have already reduced available supplies.

Short selling superfine wooltops or yarn at present is probably riskier than shorting some of the tech stocks on Wall Street.

With the next two wool sale auction weeks showcasing some of the best superfine wools from Tasmania and New England, we may even see the re-emergence of the Italian fraternity.

India has certainly made its presence felt more strongly in the past three weeks than at just about any time during 2020. It is amazing what a cricket test series win will do for the confidence of a nation.

So, the exporters are primed to go - albeit with one eye on their wallets.

The traders in China and elsewhere are bullish and working from a small stock position already.

The early stage processors will have a rest for a couple of weeks and return refreshed and willing.

Later stage processors are very willing, but just waiting for any sign of a retail order, and then they will pin the ears back and launch into it.

For much of the second half of 2020, the wool market's recovery has been almost entirely due to demand from Chinese domestic consumption - either private or from government uniform business.

The Chinese services sector has slowed sharply in January, according to a Caixin China General Services PMI report, which indicated that the gauge among smaller, private firms fell to 52.0 in January from 56.3 in December as the latest coronavirus outbreak hit sentiment hard ahead of the Lunar New Year holiday period, according to a report in the South China Morning Post news service.

The survey reinforces some expectations that weakness in the services sector is likely to deflate the bubble of growth that China has been able to achieve while every other large economy slipped into recession in 2020.

But it may also spur Beijing to avoid any reduction in economic support in the near future.

The last thing the wool market needs right now is for China to "catch a cold".

At long last, the currency trend appears to have moved back in Australia's favour - with the US Dollar regaining some strength again.

Given that more and more analysts are suggesting the USA will rebound sooner than Europe from COVID-19, and Joe Biden's administration is still likely to splash more cash around, the US Dollar should continue to strengthen. That is further good news for Australian exporters.

So, the outlook for the wool market in the medium-term is for continuing strengthening - with just a small blip or two in the short term.

The story Wool continues to move through the supply chain, but stocks are building in parts first appeared on The Land.