With the planting window about to close for summer crops on the Darling Downs, some growers are willing to take a punt on delayed rainfall and plant grain/fodder crops. 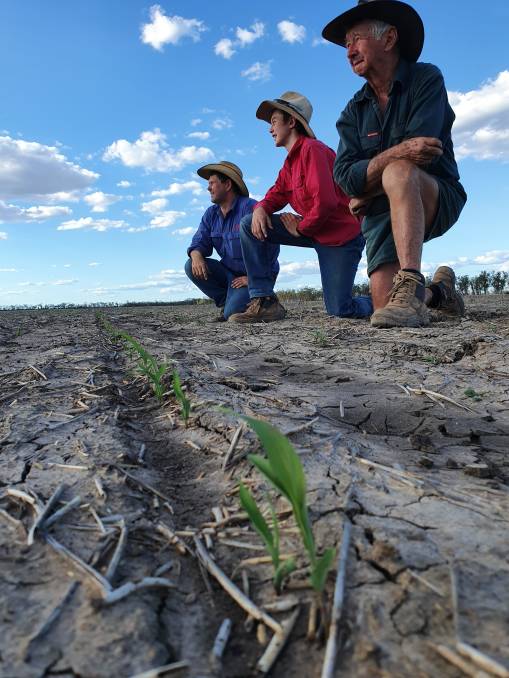 Holding out hope: Darling Downs farmers Rick, Angus, 14 and Dudley Cronin, Jandwae, are keeping a watchful eye on the sky after planting 90 hectares of sorghum recently.

Growers that missed out on the opportunity to plant last spring have taken advantage of recent rainfall to plant late summer crops.

Among those is Jandowae farmer Rick Cronin and his father Dudley, who planted 90 hectares of sorghum before a change rolled through last week.

The Cronins mainly grow summer and winter cereals on their 1093 hectare dryland property.

"We received 40mm on the crop last week and it's starting to come through now but in some places the moisture hasn't met up with the subsoil, so we're hoping for a bit more," Mr Cronin said.

"We totalled 70mm since the middle of December, that's when the rain started to come through."

The Cronins are gearing up to gamble again and plant another 100 to 150 hectares.

"This is probably the earliest sorghum planting event we've had in three years," he said.

Their grain is sold to feedlots in the Burnett and Darling Downs and their sorghum usually goes to the poultry industry. "We were told it would bring a nice wet winter, spring and summer; well our winter crop was a write-off with no rain in spring," he said.

"Is this going to be the new normal? We've been planting late for the past three to four years now because there hasn't been planting rain earlier on.

Mr Short said the end of the planting window was approaching on the Darling Downs and in northern NSW.

"In recent years, we've seen some disappointing springs where we haven't seen planting opportunities arise, rain events have come late and people have planted later as a result," he said.

Reduced grain production on the Darling Downs has meant commodity prices have kept up however, Mr Cronin said this was on the back of the challenges with Chinese barley tarrifs.

"We put some barley in last year which we didn't get a lot off, and with the time China took with their tariffs, the commodity price sort of dropped around $100 a tonne, not that it probably would have helped us a lot, but it just becomes another nail," Mr Cronin said.

"For last year's crop, we used the subsoil moisture from January-February rain and we got to April where we had to build a machine to dig down eight inches, which is pretty unheard for cereal crops."