The country that the search is taking place in. Pictures supplied.

Police launched a search operation on Sunday morning after a man was reported missing at Greenvale, west of Townsville.

A missing man subject of a land search near Greenvale was located at around 2.15pm by searchers.

He was flown by rescue helicopter to Townsville University Hospital suffering pain from a pre-existing back injury and dehydration.

The Queensland Police Service would like to thank all those who assisted with the search.

Police launched a search operation on Sunday morning after a man was reported missing at Greenvale, west of Townsville.

A 38-year-old Kuranda man was travelling along a road off the Kennedy Development Road to a worksite on Friday, January 8, when he came across a flooded river.

He planned to stop near the river overnight and reassess his journey the following morning.

A colleague travelled out to meet the man on Saturday morning, however the man and his truck could not be located. 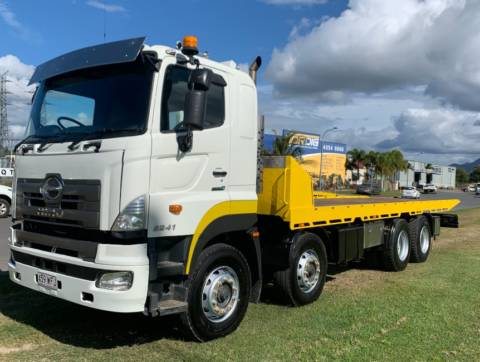 The truck that has gone missing, along with the Kuranda man driving it.

Police hold serious concerns for the man's welfare due to flooded waterways in the area.

The man is described as an experienced truck driver and was driving a white FY series Hino bearing Queensland registration 459-WFJ.

A multi-agency search involving ground crews, boats and aircraft has commenced focusing around a mine site north of the Lynd.

If you have information for police, contact Policelink by providing information using the online suspicious activity form 24 hours per day.

You can report information about crime anonymously to Crime Stoppers, 24 hours per day.