Queensland recorded its fifth-warmest year on record in 2020, while rainfall was below average in much of the state. 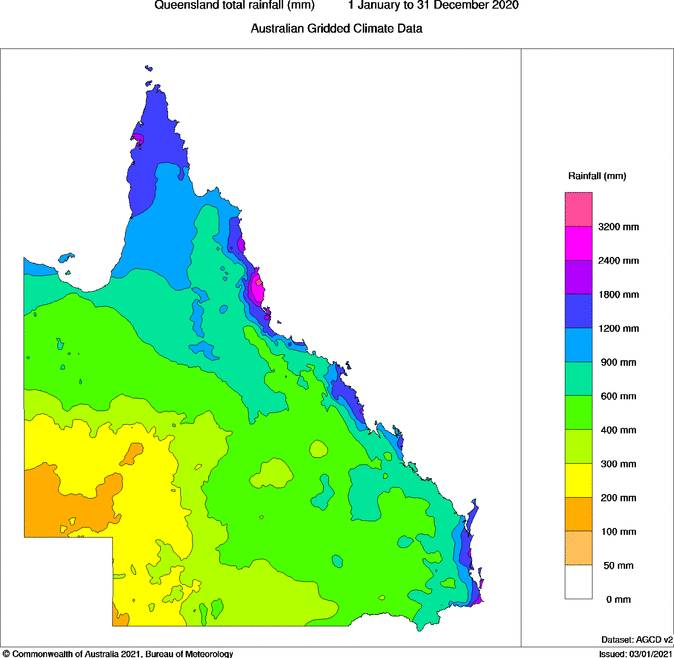 QUEENSLAND recorded its fifth-warmest year on record in 2020, while rainfall was below average in much of the state.

The Bureau of Meteorology's annual climate summary shows Australia recorded its fourth-warmest year on record, with the mean temperate 1.15C above average.

The hottest day was at Birdsville, where the mercury soared to 48.7C on December 5.

Charters Towers recorded its highest annual mean daily maximum temperature in 2020 of 31.6C above the 27 year average of 30.4.

And there was little reprieve overnight, with Queensland's mean minimum temperature for 2020 1.48C above average, the fourth-warmest nights on record.

With the heat came an average year of rainfall in most parts.

"We saw below average rainfall across much of the south eastern parts of the state and parts of the east coast," BoM senior climatologist Dr Lynette Bettio said.

"It was close to average elsewhere in 2020 though we did see some wet conditions toward the start of the year with the remnants of tropical cyclone Esther causing flooding across many catchments early in March." The gumboot remains with Tully.

But rainfall in the northern towns was also well below average, with Tully's average yearly rainfall from 1925-2019 4083.3mm. The town also holds the crown for the wettest year on record, with 7898mm falling in 1950.

While a topical low in the Gulf of Carpentaria and monsoon trough produced above average January rainfall in the northern tropics, and extremely heavy falls about the north tropical to Burdekin coasts, this wasn't to continue.

Home Hill Post Office had its highly daily rainfall on record on January 28, when 424.2mm fell, while the Ayr DPI also recorded a record breaking 327.8mm on that day.

It was very wet across the northern half of Queensland in May, with a surface trough and moist onshore flow bringing heavy showers over 250mm around Mission Beach on May 20, while Bingil Bay recorded 301.8mm on May 21.

Much of the rainfall was confined to the eastern half of Queensland in June, with little to no rainfall recorded in western Queensland.

June rainfall was close to average in eastern Queensland, and below average central and western parts and the southern interior.

La Nia was declared active in the tropical Pacific Ocean by the Bureau on September 29.