When Tom Martel set up his butcher shop to cater for the gold rush in the Gilberton region in 1869, he could hardly have imagined his descendants still living there 150 years later. 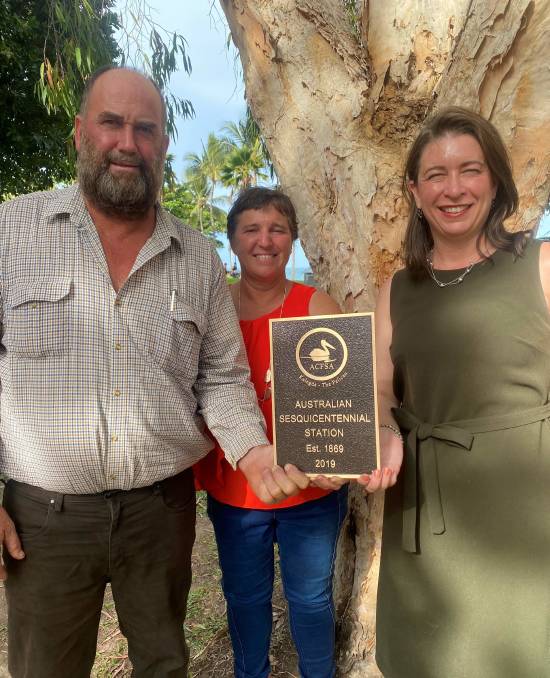 When Tom Martel set up his butcher shop to cater for the gold rush in the Gilberton region in 1869, he could hardly have imagined his descendants still living there 150 years later.

The significant milestone in northern Australian history was marked last December with the presentation of a plaque from the Australian Century Farm and Station Awards.

The presentation was made by Queensland LNP Senator Susan McDonald to Rob French, the fifth generation of the family to live at Gilberton Station in the Etheridge Shire, and his wife Lyn.

Senator McDonald - herself from a family with a long history of cattle production in north west Queensland - paid tribute to the Frenches and other early pioneers who laid the foundations of today's northern cities and towns.

"It's incredibly important that we recognise the history of early pastoralists, particularly as we try and rebuild the connection between city and country," she said.

"The Frenches' story is amazing, it's how the beef industry got established in North Queensland and it's now recognised as one of Australia's top beef-producing regions despite early setbacks of ticks, isolation, gold booms and busts, and market volatility.

"Early settlers went out and did it really tough without any help or amenities that we take for granted today, and it was their hard work and endurance that has helped make Australia what it is today. We're very grateful."

Lyn French said the award was just recognition of an early pioneering family that overcame numerous setbacks, not least the lack of medical help nearby.

"We're really proud to think that 150 years ago, Rob's family took up Gilberton and they're still there seven generations later," she said.

"Life was very tough for those first settlers - the Martels had 15 children and only five survived.

"If they had to go to Townsville for any reason, it took a whole day just to cross Hervey Range.

"There are many families in the north and Gulf country who have long associations with their properties and I think it's great for them to be recognised."

The son of Guernsey farmers, Tom Martel arrived in Australia in 1855 and in 1867 he married Lydia Abigail Jones.

He and two brothers travelled north to Pentland, taking up Bettsvale Station where one brother stayed while another headed to Cape York and Tom went to Gilberton.

As a teamster, Tom not only carted ore from the local mines such as Mt Hogan, Percyville, Gilberton and Ortona to Townsville but also brought supplies back to sell to the hungry miners that roamed the Gilberton hills in the gold rush days.

What took him six weeks to undertake then now takes six hours.

Tom Martel purchased his cattle from Chudleigh Park Station, 100 kilometres south west of Gilberton and the family widely acknowledges that poddy dodging along the way is how the Gilberton herd would have started.

Not long after their arrival, in 1870, they finished building a stone fortress, which still stands, that helped them survive early Aboriginal hostilities.

According to JH Lethbridge in his tribute to the Michelmores of Gilberton, the community was the only established white settlement of any size that had to be evacuated due to the constant presence of war-like Aborigines, culminating in an 1873 attack that resulted in most of the population fleeing to the Palmer River goldfields.

As well as his carrying business and butchery, Tom Martel owned a hotel called The Rising Sun at Gilberton until 1883.

The town at one time supported seven pubs, two butchers, an icecream factory, plus a population of some 3000 Chinese.

While still keeping their cattle at Gilberton, the Martel family moved to Georgetown for a short time, where Tom became the soda water manufacturer in 1874.

Thomas Ernest Martel was born in Georgetown early in 1875. The family then returned to Gilberton and reoccupied the stone fortress as their living quarters for a few years as their first daughter Lydia was born there in 1882.

It was on New Year's Day 1895 that Tom Martel Snr lost his life at a picnic race meeting at Oakville (now Kidston) when the horse he was riding bolted and smashed into a box tree.

By then the Martels had also purchased Christmas Hill, 80km east of Gilberton, breeding remounts for the Indian army.

While her brother Tom was in India breaking the horses in, his 20-year-old sister Lydia looked after the cattle at both Christmas Hill and Gilberton for a time.

She would walk bullocks across to Perryville to the butcher as well muster on neighbouring stations, becoming known as the best horsewoman and cattle person in the district.

Her passion for looking after the land was also something people in the district looked upon as something out of the ordinary.

Lydia believed in stocking lightly and reading the land, which her great-grandson Robert French continues today.

During this period, Lydia met Ernie Michelmore, another well respected stockperson, who was working on Robin Hood Station, and they married in 1908 and went to live permanently at Gilberton. 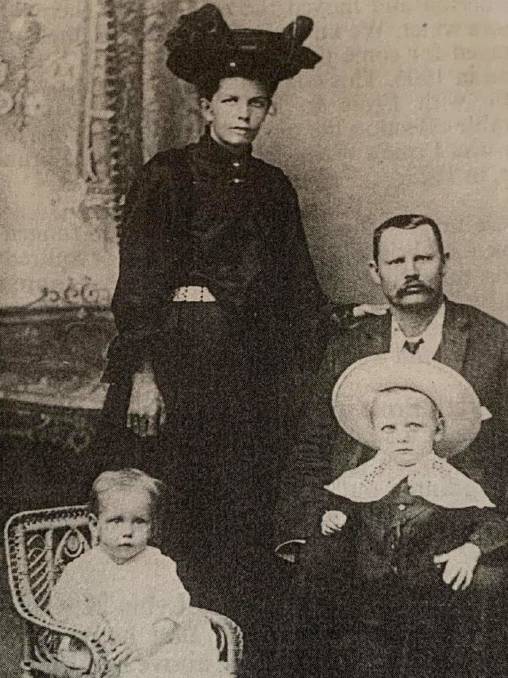 Lydia Michelmore (nee Martel) and her husband Ernie Michelmore, pictured with their children Florence and Tom, were Rob French's great-grandparents. His grandmother Florence grew up at Gilberton.

They survived terrible drought in 1908-09, thanks to a partnership with James Clarke at Robin Hood, while major flooding in 1917 saw them build a new residence on higher ground on the property.

This is the current residence of Ashley French and his family, the sixth and seventh generations, who live there now.

In 1916, Lydia became a weather recorder for the Bureau of Meteorology.

Gilberton had recorded rainfall since 1869 and Lydia sent in rain reports by pack horse mail every three months.

Lydia and Ernie Michelmore had six children but only four survived - Thomas, Florence, Bertha and Lydia.

Ernie, Lydia and their children worked hard to carve out a living at Gilberton, with Tom taking work on neighbouring stations at times to help make ends meet.

He did a huge amount of fencing on Werrington and Pine Yard, including the boundary fence between Oak Park and Werrington, fencing along the Great Diving Range where the watershed splits the Gilbert and Flinders River catchments.

Always the first to try anything new, he worked closely with the aerial ambulance and then the Royal Flying Doctor Service to help bring transceivers to all stations.

He grew vegetables to sell to others via the mail truck to Einasleigh, and became the first in the district to supplementary feed cattle.

He married Eva Wells later in his life and lost his life in a car accident in 1977.

His sister Florence married Dalton Hoolihan, a son of a well-known carrier in the district, at Kidston in 1929 and they had four children - Ernest, Adelaide, Kevin and Jean.

In 1977, Gilberton was handed over to Adelaide French (nee Hoolihan).

She had married Gus French and they lived at Mt Hogan, at the western end of Gilberton, with their two sons, Trevor and Robert.

In 1986 Robert married Lynette Croker and settled at Gilberton on a site on the river immediately opposite where the original Michelmore home, Elmgrove, stood.

They took over the reins of the property in 1988 and have three children: Kerri-Ann, Ashley and Anna, and now four grandchildren.

Two of them, Robert and Ellie, are the seventh generation to live at Gilberton. 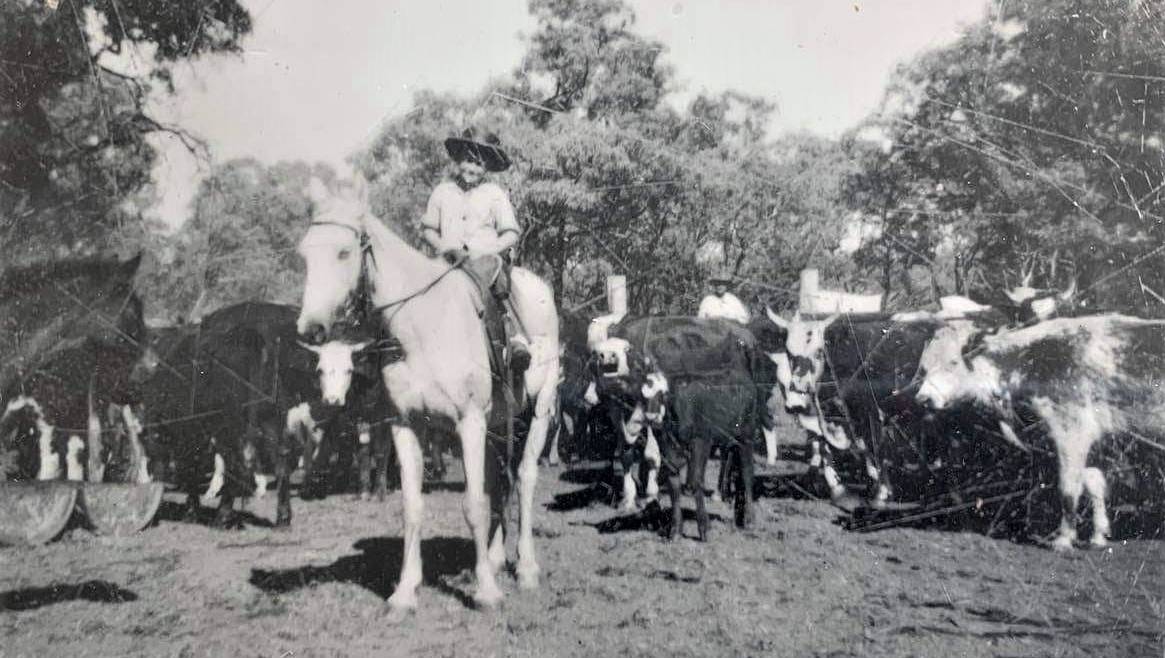 Rob French mustering on Gilberton as a young boy.

Today it and satellite properties run Brahman cattle and the family operates a thriving tourism business.

They are passionate custodians of their environment and dedicated guardians of its significant Aboriginal cultural sites.

The ACFSA's annual awards program aims to keep stories such as the Martel/French one alive and each applicant family receives a bronze plaque commemorating the milestone.

Wherever they choose to display it, the plaque symbolises the family's perseverance and ability to stay on the land in the face of constant change.

An ACFSA spokesperson said the wonderful application submitted by the French family, written by Lyn, was truly a treasure and couldn't fail to be appreciated now and by future generations, describing it as a gift to the nation.

Charters Towers stock and station agent Jim Geaney also congratulated the Frenches, saying they had been marketing the family's cattle for many years and had seen their commitment to herd improvement.

"In recent years you have topped the cattle sales in Charters Towers on many occasions and this has only come from consistent hard work, and a real effort and energy for success," he said.

"We have known you and your family since you were toddlers and I know how proud you both are of your ancestors and your children and their families in having a real connection with the land and how you both protect it, nurture it, and lead by example to others for future generations to enjoy.

"We again congratulate you both for your exceptional passion for caring for this great land and the positive flow-on effect you have on me and others to make this world a better place."