Ky Hamilton in action in a bull-riding event in the US this year. Pictures: Bullstock.

Bull riders from Queensland's north are continuing to show the world how it's done, with 20-year-old Ky Hamilton, who hails from Mackay, finishing the 2020 regular season as the number two bull rider in the world.

Bull riders from Queensland's north are continuing to show the world how it's done, with 20-year-old Ky Hamilton, who hails from Mackay, finishing the 2020 regular season as the number two bull rider in the world.

Moving from PBR in Australia midway through 2018 after gaining a US college scholarship, he competed in the Professional Rodeo Cowboys Association this year and finished the COVID-interrupted season ranked number four after qualifying for and competing in the National Finals Rodeo, and was runner-up for the rookie title.

Earlier this year Clermont's Aaron Kleier cut short his debut season in the US when the pandemic began raging, going on to win a record third consecutive PBR Australia title.

Hamilton's achievement is no small feat for someone moving to a different country alone to make it in a professional sport but he achieved his goal this year of making the 10-round National Finals Rodeo, held in Arlington, Texas rather than the usual Las Vegas venue.

He was marked 85 points or better 18 times in the season, including a 90-point ride on Eyebrows at the Las Fiesta De Los Vaqueros rodeo, for an 82.85 average ride score, and chalked up five event wins.

Ky Hamilton's 90-point ride on Eyebrows in Tucson in February.

Post by Ky Hamilton's 90-point ride on Eyebrows in Tucson in February..

Hamilton himself started out steer riding when he was 12 and he had his first taste of the US scene when he was 15, taking part in the Junior High School Finals in Iowa.

One US rodeo website has described him as bursting his way to the top of the US bull riding scene with his brand of Queensland tenacity, style, and flash.

On another site he attributes his determination to his father, who told him it wasn't a sport he could be half-hearted in, and his techniques and inspiration to the only Australian to win the American Professional Bullriding Championship, Troy Dunn.

"Troy was my ultimate idol, the mentality he had and the way he rode bulls inspired me," he said. 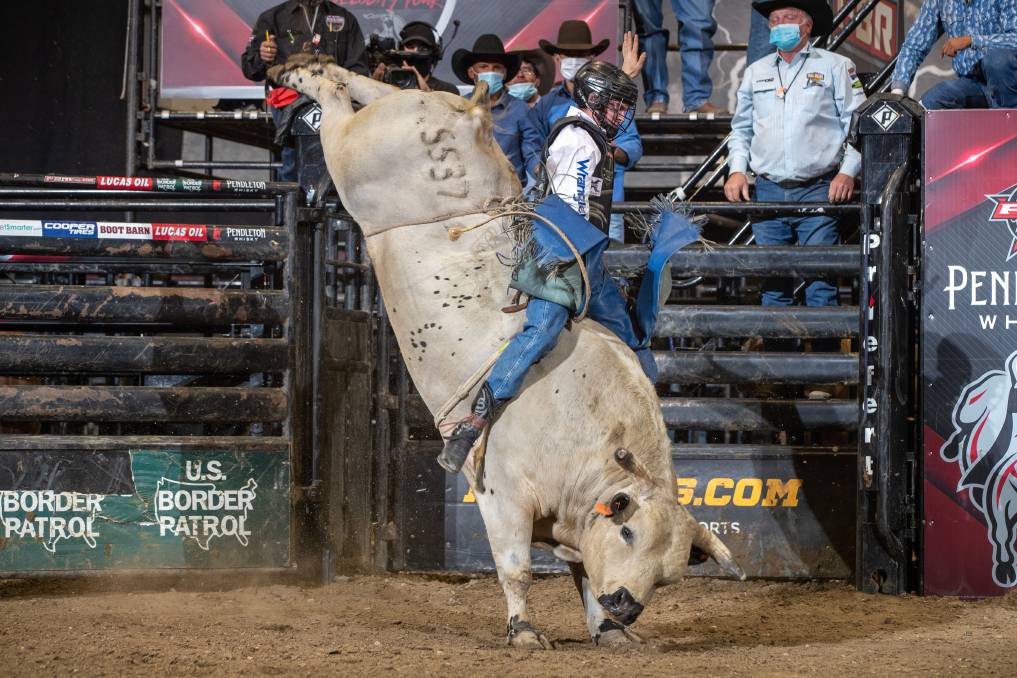 Another shot of Ky Hamilton in action in the US in 2020.

His coach at Sul Ross State University in Alpine, Texas, CJ Aragon was quoted as saying Hamilton was probably one of the hardest workers he'd coached in 14 years.

He's majoring in industrial technology, learning everything from welding to woodworking, small engine repair and industrial drawing, but his first love is bull riding.

His university workout routine starts with CrossFit at 5.30am, then a hill run equivalent to 50 flights of stairs, then a gym session with steer wrestlers before classes.

"If he is heading out to rodeos, he turns his work in early and stays on top of it," Aragon said, who takes one of the classes, event management and planning.

"He's one of those students that is coachable. He wants to be good and he'll work really hard at it. On the dash of his truck is a book - Mind Gym - and he's read it a few times."