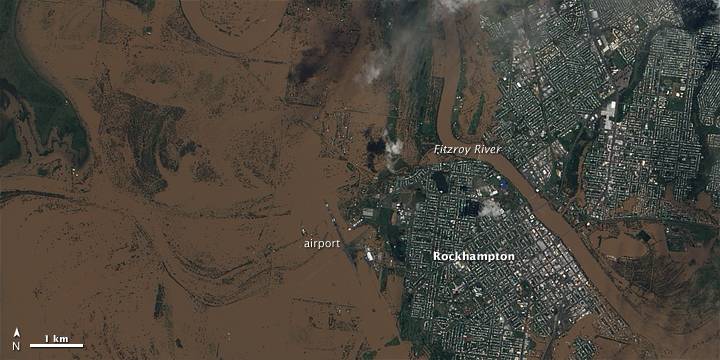 This January marks 10 years since central Queensland received prolonged and extensive rainfall, causing catastrophic flooding and one of the state's largest evacuations in history.

This December and January marks 10 years since parts of central Queensland received prolonged and extensive rainfall in 2010-2011, causing catastrophic flooding and one of the largest evacuations in history.

The severe flooding and torrential rain was caused by a La Nina event and as this upcoming La Nina approaches, the Bureau of Meteorology is predicting heavy rain next week for parts of Queensland.

More than 78 per cent of the state (an area bigger than France and Germany combined) was declared a disaster zone; over 2.5 million people were affected and 33 people died and three remain missing.

There was a mandatory evacuation for the town of Theodore on December 29, 2010 - the first in Queensland's history.

In addition to the Theodore evacuation, the Queensland floods also impacted Rockhampton with the Fitzroy River peaking at 9.2 metres, 2.2 metres above flood stage. It's a time the Queensland State of Emergency Service remember all to well, with some service men who were instrumental to the evacuations and rescue operation, returning to the banks of the Fitzroy on Friday to reflect on that time.

Fire and Rescue serviceman Barry Thompson remembers the Rockhampton floods all too well and said the major incident involved all the emergency services.

"Especially in the Rockhampton area there were evacuations out of low lying areas and of course that's quite upsetting for a lot of people, and especially elderly people," Mr Thompson said.

"Theodore itself was was totally evacuated and I think, from memory, most of those people were evacuated by helicopter and that was a big effort to get those people.

"The involvement from all emergency services, which took place in Theodore was a joint effort, because we needed those people in different areas of expertise to get those people evacuated." 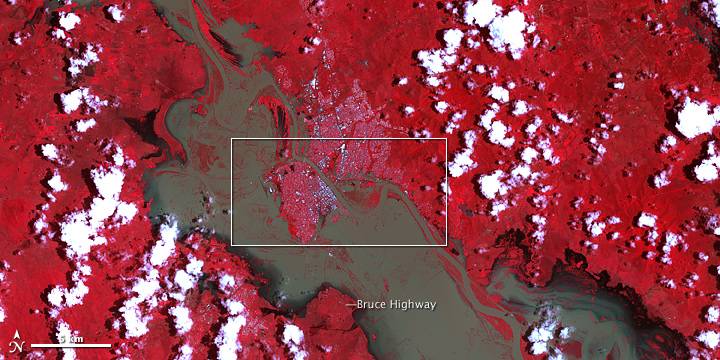 +3
Though water levels had started to subside, the Australian city of Rockhampton was still inundated when the Advanced Spaceborne Thermal Emission and Reflection Radiometer (ASTER) on NASAs Terra satellite took this image on January 7, 2011.

SES Local Controller for Rockhampton region Eddie Cowie saidthere were a number of lessons that came out of that flood event.

"The Theodore evacuation, and with Rockhampton ultimately flooded, we had over 1500 flood boat operations where we transported over 4000 people, locally here within Rockhampton," Mr Cowie said.

"We had a number of SES service people choppered into that location to try to coordinate the evacuation of Theodore and it was quite unique, we've never been in a position where we've had to evacuate an entire town before and the coordination ran fairly smoothly.

"Unfortunately we see it quite regularly from a Rockhampton region perspective, we've been declared six times in the last 10 years for natural disasters so it's not unique for us to see these types of extreme weather events that put a large amount of water into our catchment areas."

The most extreme flooding occurs where the Mackenzie and Dawson rivers flow together to form the Fitzroy River. This image, taken on December 14, 2010, shows the basin before the flooding started. The contrast between the two images indicates the severity of the flooding. Image: NASA GSFC

Area Controller of the Capricornia region Patrick Downing was part of the emergency management team in Queensland during the flood event.

Mr Downing said his memory of the flooding was chaos.

"With every event we always learn," he said.

"I think they pulled together very well and with Banana Shire Council, they really came to the fold in 2010 and 2011.

"The mandatory evacuation wasn't made easy. That was in consultation with the district disaster coordinators at the time. Rivers in Australia's Fitzroy Basin were swollen when the Moderate Resolution Imaging Spectroradiometer (MODIS) on NASA's Aqua satellite captured this on January 4, 2011.

"So the decision was made with helicopters on standby and at first light to get in there move people.

"A lot of people didn't want to leave their animals, but we had ground crew in Thoedore having community meetings, council workers, emergency services, SES and Fire and Rescue all pulling together to reassure the community that we would get through it.

"There's going to be some issues, of course, along the line and we were very lucky to have the mining industry of Moura, that accommodated a lot of people, so I think it all came together."

Rockhampton was isolated both by land and air, with the airport flooded and the Bruce Highway leaving the city to the south also under water.

In late January 2011, flood waters receded, leaving central Queensland residents impacted by the flood waters to pick up the pieces and help those in need.

The story Rockhampton remembers: 10 years on from the flood disaster first appeared on Queensland Country Life.