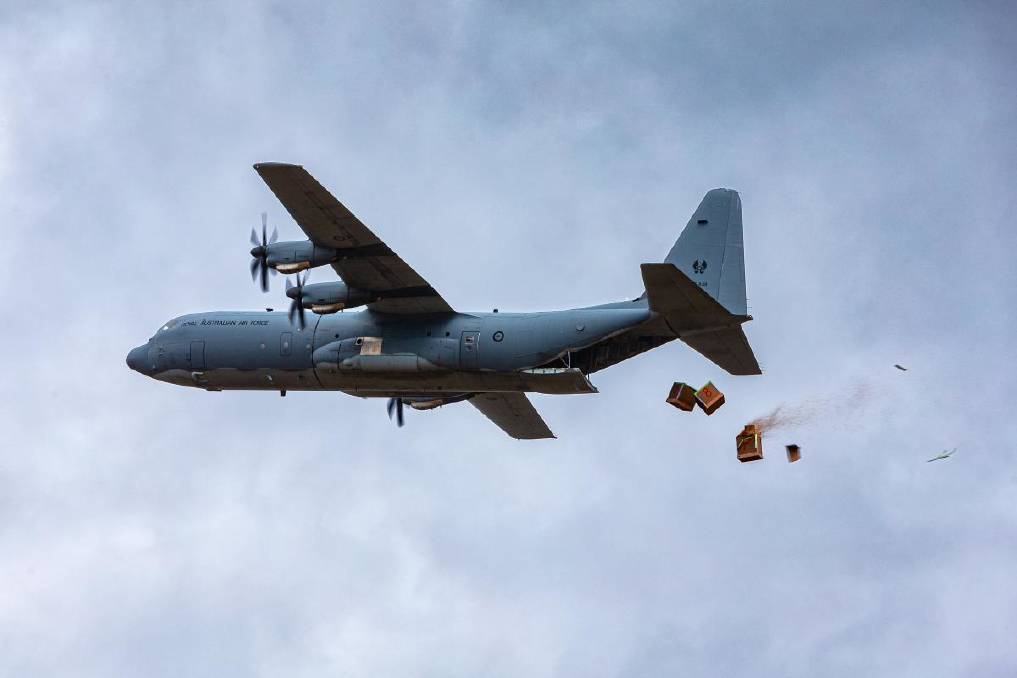 Bundles of livestock fodder fall from a No. 37 Squadron C-130J Hercules during a trial at Londonderry, NSW. Photo: Corporal David Said.

A new method of delivering fodder to cattle stranded by floodwaters has been developed by the Royal Australian Air Force.

A NEW method of delivering fodder to cattle stranded by floodwaters has been developed by the Royal Australian Air Force.

The Air Mobility Training and Development Unit was tasked with finding new ways to deliver bulk fodder in the wake of the 2019 north-west Queensland floods.

At that time, the Australian Defence Force stepped up and used MRH-90 and Chinook helicopters to deliver 43 tonnes of livestock feed and 42,000 litres of aviation fuel during the height of the disaster.

The RAAF formerly performed the role in the 1980s and 1990s, with fodder bundles left uncovered in the cargo bay and pushed off the ramp into the drop zone.

Wg Cdr Clark said the new method involved constructing a frangible box around the fodder, reducing the risk from foreign object debris damage to the aircraft.

"Constructing this load needed easily acquired materials that would not injure animals if ingested and the fodder needed to be disseminated on the ground without humans," Wg Cdr Clark said.

"Because the old method involved uncovered bundles of fodder, it presented a hazard with dust and fibre accumulating inside the aircraft following the drop.

"The debris would accumulate everywhere - under floors and inside avionics boxes and our maintenance teams were still finding it months after the drops."

Each fodder bundle weighs about 160kg.

Warrant Officer Class 2 Joe Campbell said cattle needed to be able to eat the fodder without people being at the drop zone to unpack the load.

"The solution to the problem is either to have the fodder fall apart in the sky or to break upon impact," WO2 Campbell said.

"We chose to break it on the ground, as history has proven the hay flies back into the aircraft if it is designed to fall apart in the air."

Normal airdrop loads would use parachutes, however, they were not employed on fodder drops because of the risk of cattle either ingesting or becoming caught in the cordage.

Instead, air crew built a cube box to hold the 160kg bales, which allowed it to tumble more evenly through the air.

"The solution uses no cordage, as cordage would be hard to consume by the cattle," WO2 Campbell said.

"The straps that normally hold the bales together are also removed and we make the load strong enough to survive the required flight regimes including freefall.

"We were able to use in-service cardboard boxes reinforced with edge protectors."

"The fodder drop does require sufficient clear land for us to mark a drop zone so that we didn't harm the livestock we're there to help," Air Commodore Newman said.

"However, this role allows us to conduct fodder drops when cattle had no other means of being reached in a timely manner, either by land or air resupply."