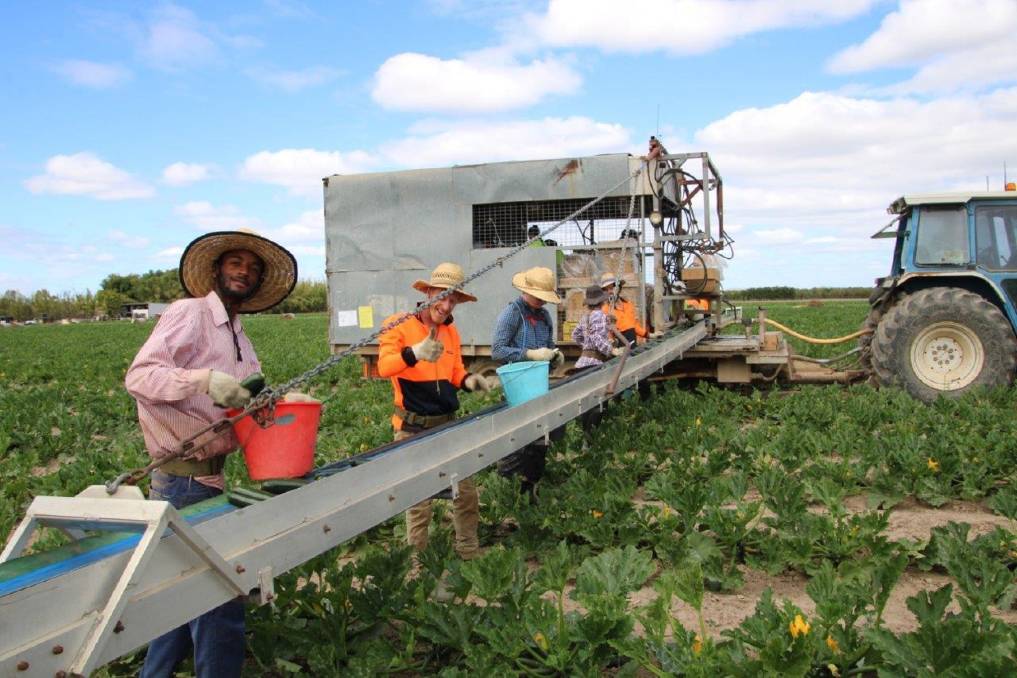 WORKERS WANTED: Dalbeg growers Lorelle and Sean McShane were forced to plough squash back into the field due to a dire labour shortage in the north.

A severe labour shortage is threatening to decimate the north's horticulture industry and send the cost of fresh fruit and vegetables skyrocketing.

A SEVERE labour shortage is threatening to decimate the north's horticulture industry and send the cost of fresh fruit and vegetables skyrocketing.

Growers are increasingly concerned that a lack of willing workers, brought about by the coronavirus pandemic, will leave them unable to harvest their crops.

With international borders closed, seasonal worker programs shut down and limited numbers of backpackers remaining in Australia, coupled with the federal government's generous JobSeeker payments, the labour pool is dwindling.

For Dalbeg growers Lorelle and Sean McShane, the shortage has already forced them to plough $150,000 of squash back into the field.

"We had to plough in our last squash crop because we couldn't replace the workers leaving," Mrs McShane said.

"We had ads out everywhere, we even offered people on farm bonuses but once the backpackers finish their 88 days they leave. There is nothing to entice them to stay."

Mrs McShane said if nothing changed, it was unlikely they would plant a crop for 2021.

"We need to make a decision by March, but the prediction is we'll be 26,000 workers short in Australia by March unless there are planeloads of backpackers or bus loads of people out of the cities," she said.

"I can't see us growing next year unless there is security in the workforce."

Mrs McShane said with Europe once again locked down, she expected the labour shortage would continue for one to two years.

"If we don't get workers Australia's going to really feel it with fruit and vegetable shortages in supermarkets and high prices."

Agriculture Minister David Littleproud said incentives were in place to encourage Australians to take up seasonal work in the regions, including a $6000 relocation assistance grant, and a new pathway to Youth Allowance.

He said the government had already reopened the Seasonal Worker Program and the Pacific Labour Scheme.

"We are ready to stamp the passports of up to 22,000 workers in the 10 participating countries that are ready and waiting to come to Australia once states approve their quarantine plans," Mr Littleproud said.

But Mrs McShane said farmers were being asked to foot the bill to quarantine the overseas workers at a cost of $2500 a head.

"The price is astronomical, $2500 a person is out of reach for growers when you consider the slim margins."

Kennedy MP Bob Katter queried why thousands of Australians were sitting idle on welfare while crops were left to rot.

Mr Katter said 15,000 farm jobs would be available in the Cairns hinterland region during the peak season in coming weeks.

He said removing mandatory quarantine requirements for workers from Samoa and Vanuatu and renovating abandoned cyclone damaged resorts to use as quarantine hubs for incoming overseas workers could help alleviate the problem.

"The Pacific Islands are COVID-free, and North Queensland is COVID-free. So why are these workers being forced to quarantine here at the cost of the farmer?

"Farmers I have spoken to are simply asking for the restrictions on South Pacific Islanders to be lifted like with New Zealand which allows a reliable coming and going of the workers."