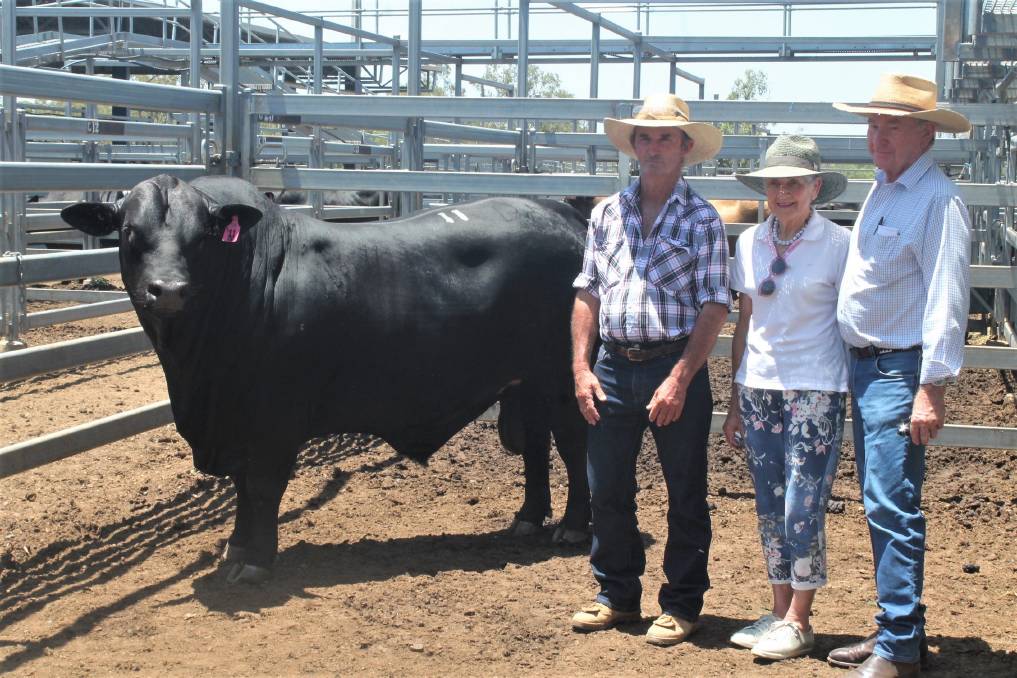 Amid searing temperatures, the bidding heated up at the Central Brangus Classic Sale at CQLX, Gracemere, with a 98 per cent clearance and a very strong $10,413 average.

Seventeen central Queensland-based vendors sold an impressive line-up of 87 Brangus bulls, with a total gross of $906,000.

Top price bull vendor Mick Madden sold five bulls in total, grossing $143,000, for a strong average of $28,000 and said it was a much better sale result compared to last year's event.

"The top bull I sold was a very good type, his temperament and fertility was second to none, his sheath set-up was great and all round just a good bull," Mr Madden said.

"I came to the sale pretty optimistic, knowing they'd go reasonably well, but wasn't expecting them to go as well as this," Mr Madden said.

The Galloways own and run their Duarran Brangus stud at Roma and were confident in their top price bull purchase.

"We were looking for a good black bull to go over our cows on our property at Toogoolawah and we're chasing a bull with good conformation," Mr Galloway said.

"This bull had a great muscle pattern, good bone, good head, and was just well put together throughout."

The Galloways also purchased 24-month-old sire Bates 01, who tipped the scales at 848kg with an EMA of 134sq cm and said the sale was relative to the growth of the Brangus breed in central Queensland.

"We thought he was a handy calf; he was our second choice and he'll be a good young bull to add to our sire battery," Mr Galloway said.

"When we look north, at central Australia or Queensland, you know the country is still not good because of seven to eight years of a drought, so there'll be producers in a restocking mood for some time," he said.

Second-top price honours went to Earlwood 3856 who sold for $37,000, offered again by the Madden family and sold to Bevan McKenzie and family, Tanyar Cattle Company, Blackwater.

Next in line was Bonox 1217, who sold for $24,000 and was offered by Ben and Karla Woodard, Boxtree, Taroom and went to Bullrush Pastoral Company, Nebo.

Bulk buying honours of the day went to three operations.

The Comiskey family, Lyra Pastoral Company, Capella, purchased six bulls with two bulls topping at $22,000, for an average of $15,500.