Digitally sculpted by palaeo-artist Travis Tischler, the bronze models were cast at a foundry in Thailand and took nearly a year to complete.

The new dinosaurs were made using modern 'lost-plastic' technology that involves 3D printing of digital models in meltable plastic, instead of the 'lost-wax' method traditionally used in bronze casting.

At 17m long and nearly 4m high, the largest sauropod was too big to fit in a standard open-top 40-foot-long container and had to be transported with its neck and tail removed.

After a month at sea the dinosaurs arrived at Townsville and finished their journey to Winton by semi-trailer. The immense size of the sauropods needed a crane to lift them out of their containers and place them into position at their new home at Dinosaur Canyon. 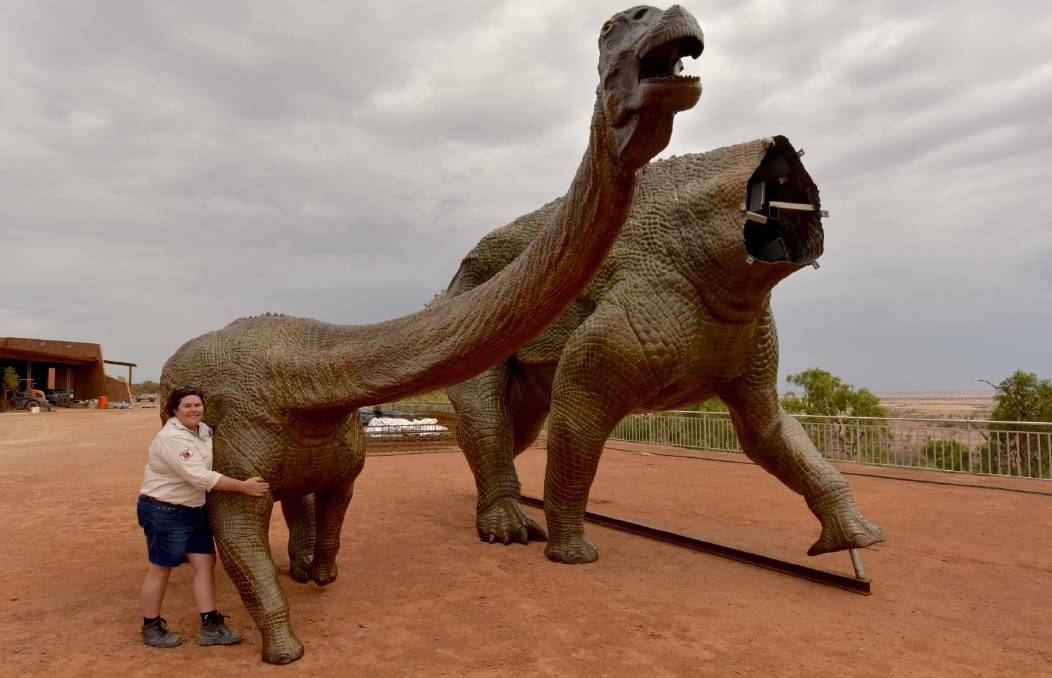 Trish Sloan with the new sculptures at the Australian Age of Dinosaurs museum. Photo: John Elliott

The dinosaurs will become part of the future March of the Titanosaurs exhibition, centred on a newly discovered 60m-long sauropod trackway being relocated from a creek bed on a property west of Winton.

The trackway, which contains the best-preserved sauropod tracks in Australia, will be enclosed in a 900 square metre solar-powered, air-conditioned building at Dinosaur Canyon.

The March of the Titanosaurs exhibition forms part of the museum's Dynamic Destination project funded by the Queensland government's Growing Tourism Infrastructure Fund and is due for completion by mid-2021.

One of the dinosaurs being loaded into place. Photo: John Elliott.

Australian Age of Dinosaurs Museum executive chairman David Elliott, who is overseeing the sauropod trackway relocation and Dynamic Destination project, said the safe arrival of the dinosaurs was very exciting.

"The logistics in getting these models built and transported all the way to Winton from Thailand has been very intense, so having them finally arrive without a scratch is a huge relief," Mr Elliott said.