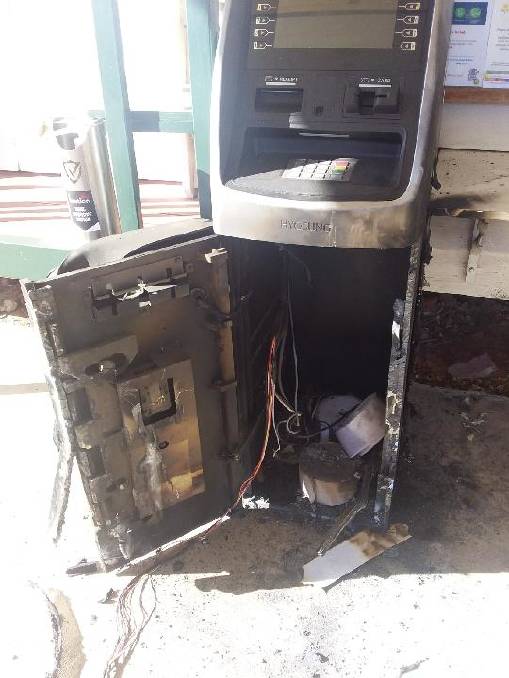 The ATM that was destroyed in Alpha in September.

Gladstone and Longreach detectives arrested the man for the alleged theft of a Jericho ATM overnight on August 21, and the theft of money from an Alpha ATM and the attempted stealing of an ATM at Bargara, between September 14 and 15.

In the case of the Jericho offence, police said a power tool was used to remove the money dispenser before dragging the machine along a verandah, where it's believed it was loaded onto the back of the vehicle.

They said it would likely have involved more than one person.

At Alpha, the ATM was destroyed where it stood.

After the vandalism in Alpha, Barcaldine Regional Council mayor Sean Dillon commented that the loss of the two ATMs would have a huge impact on the small communities, potentially causing permanent disruption if locals and visitors were unable to access cash.

"With the inability to access cash, people will not be spending in our communities, which will have a detrimental effect on our businesses, who have already been suffering after years of drought and now COVID-19."

Detectives would like to speak to anyone who can provide further information in relation to any these offences.

If you have information for police, contact Policelink by providing information using the online suspicious activity form 24hrs per day at www.police.qld.gov.au/reporting or call 131 444.

You can report information about crime anonymously to Crime Stoppers, a registered charity and community volunteer organisation, via crimestoppersqld.com.au 24hrs per day or call 1800 333 000.