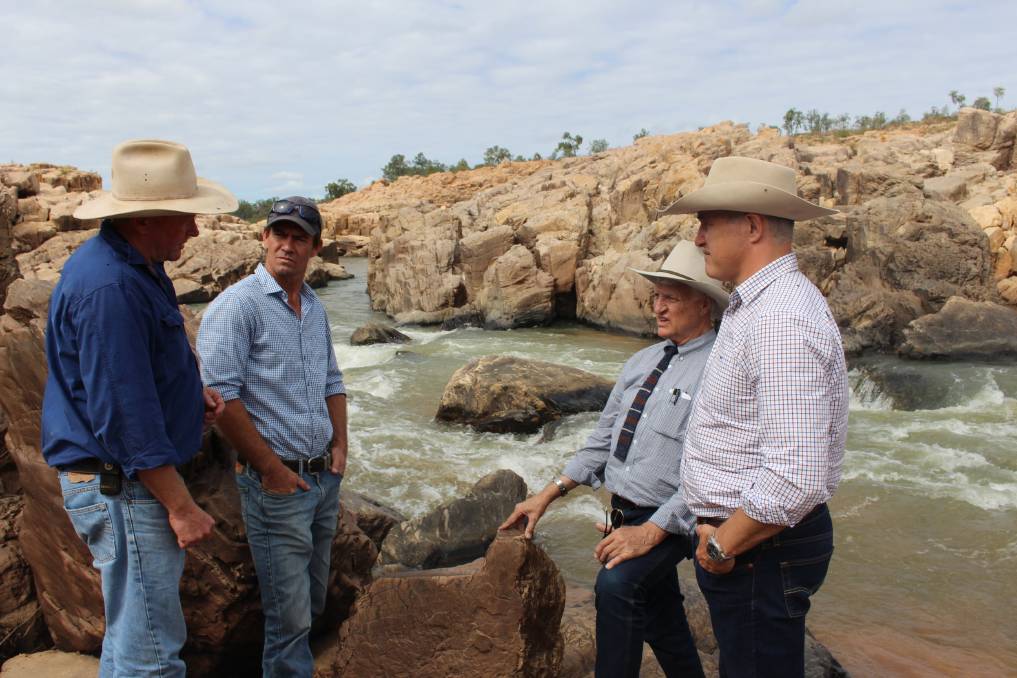 Charters Towers grazier Blair Knuth, with KAP Townsville candidate Josh Schwarz, talking with Bob and Robbie Katter at the site of the soon to be constructed Big Rocks Weir.

Big Rocks Weir will be constructed regardless of who wins the October 31 election, with the state government today committing $30 million toward the project.

BIG Rocks Weir will be constructed regardless of who wins the October 31 election, with the state government today committing $30 million toward the project.

It comes after a business case was handed to the state government last month, showing it would provide a major economic boost to the Charters Towers region and increase agricultural productivity by $35 million a year.

Ms Palaszczuk made the announcement while outlining her Townsville regional economic recovery plan to boost the economy amid the coronavirus crisis.

"We will be committing $30 million to progress the Big Rocks Weir project, a proposed 10,000 ML weir on the Burdekin River just north of Charters Towers," Ms Palaszczuk said.

It is the final step needed for the project to go ahead, after the federal government committed their 50 per cent share of $30 million in 2018.

The LNP has also thrown their support behind the project, meaning it will be built regardless of the outcome of the state election.

"It's great to back Big Rocks Weir, we know that water is so essential to us up here. This is a real commitment to the north," Mr Stewart said.

The Queensland government will invest $3 million to support preconstruction activities, and subject to finalisation of regulatory approvals up to $27 million toward its construction.

Construction of the weir is expected to support about 172 full-time equivalent positions at its peak.

Once constructed it will support up to 5000 hectares of high value agriculture, including avocados, macadamias and citrus, through supplying a minimum of 10,000ML of water.

Michael Penna, who has been farming on his property 20km north of Charters Towers for the past 30 years, has been a long time advocate for Big Rocks Weir.

"It is a step in the right direction, and I will believe it when I can see the concrete getting poured," he said.

"I'm overjoyed that a project eight years in the making is now coming to fruition," Cr Beveridge said.

"Our concern was the state government wouldn't give a firm commitment ahead of the election which would cast it in in doubt, but now they have come out loud and proud we are very happy.

"This is a catalyst project among about 10 projects in North Queensland and hopefully this is the first of many to come.

"It's about creating jobs, creating exports and what's good for Charters Towers is good for Townsville and North Queensland."

Cr Beveridge said he believed council should be the proponents of the project.

"Council has done a good job of running the current weir since... 1996, we have done that well and we will once again manage this equally well."

Katter's Australian Party Leader and Traeger MP Robbie Katter said he would push for council to be formally named the proponents of Big Rocks Weir.

Mr Katter said the impact of Big Rocks being built was significant, as the weir encapsulates stage one of building of Hell's Gates Dam, under the revised Bradfield Scheme.

"This is outstanding news for the Charters Towers economy and for the future of irrigated cropping along the Burdekin River in North Queensland," Mr Katter said.

"This has been hard-fought by many people, and I want to congratulate and thank all who have been involved in what has been another real win for the North."

Mr Katter said he would not rest until the first sod was turned on the site, and that unnecessary hold-ups created by bureaucratic red and green tape would not be tolerated.

"Our offices have had advice that the federal money $30 million has been committed and is ready to go," he said.

Mr Katter said he wanted construction to comment ahead of the start of the 2020-21 wet season.