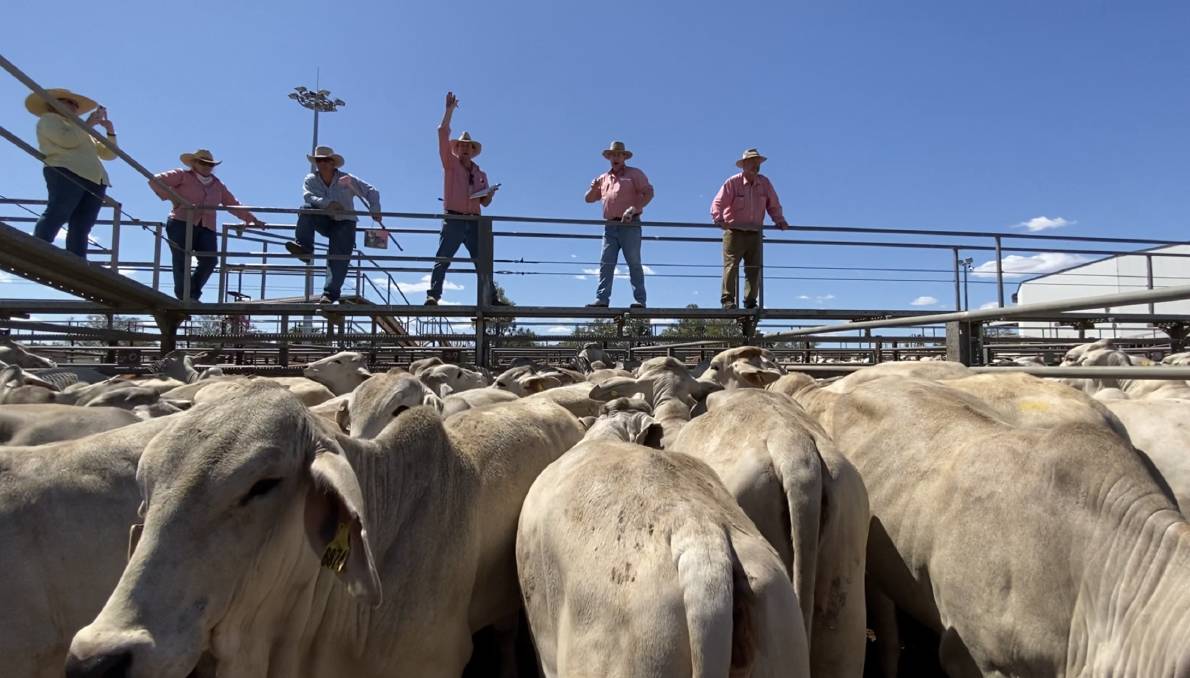 Bidding was fierce for the Kenilworth family's heifers.

Queensland's cattle market continues to soar to new heights, with a line of commercial heifers smashing the record books at Charters Towers.

QUEENSLAND's cattle market continues to soar to new heights, with a line of commercial heifers smashing the record books at Charters Towers.

Well-known seedstock producers Margaret and Kelvin Maloney, Kenilworth Brahmans, put females on the open market for the first time and were overwhelmed with the response.

A line of 104 yearling heifers, with an average weight of 302kg across four pens, sold for an astonishing 1174c/kg to average $3544/head at a special store sale at the Dalrymple Saleyards last week.

In total, Kenilworth yarded 266 No.9 grey polled heifers, weighing between 270kg to 540kg.

Mrs Maloney said they were astonished with the result.

"Surprised would be an absolute understatement," Mrs Maloney said.

"It is very humbling when you see people standing behind us like that."

Mrs Maloney said weather conditions had led to their decision to put the females on the open market.

"For the past three summers we've only had grass rain and not moisture rain, and with gale force winds the past few months, the country is really drying out."

Mrs Maloney said she was humbled by the support.

"Friday was just nothing like we'd ever expect," she said.

"We like to keep our feet on the ground and we will continue to try to improve our herd."

Farm manager Cody Sheahan said he was thrilled to have purchased from the Maloneys, who are known for producing quality cattle.

"The emphasis Kelvin and Margaret put on breeding pollies, they're always buying the best polled genetics and we wanted to get our hands on some of that," Mr Sheahan said.

"We will breed on with them and put them into our program and they'll fit in well with what we're doing."

Mr Sheahan said bidding was fierce for the quality genetics.

"I don't think we'll see that again for a while, it was good to be a part of it."

Elders agent Malcolm Smith said in his years selling cattle and following sales, he had never seen a result like it.

"I've been selling cattle a long time and I've never seen it before," Mr Smith said.

"John Soutar has been an auctioneer for 38 years and said it was a mind blowing experience for him.

"I thought they might average 430-440c/kg; to come up with that kind of average, 920c/kg, is more than double the normal commercial price.

"It is definitely a record for Charters Towers and I'd hazard a guess a record for commercial sales in Australia."

Mr Smith said the Maloneys had focused on breeding polled grey genetics for more than 50 years and people travelled from far and wide for the sale.

"We had people from Biggenden, southern Queensland, some that had driven 23 hours to get there for the sale," he said.

"A lot went home empty handed, which goes to show really good genetics gets people in."

Mr Smith said he expected the market to remain buoyant for some time.

"It's very buoyant, we're on a wave and I wouldn't see it coming off for quite a while with the shortage of cattle and the export trade has put a base into it," he said.

"Quality cattle is always going to bring a premium price, though maybe until these times they haven't.

"People put a lot of time into their cattle, good husbandry and genetics, which may not have been regarded but I think they will be from now on."