Rams are hot property as producers make moves to breed their own replacement ewes. 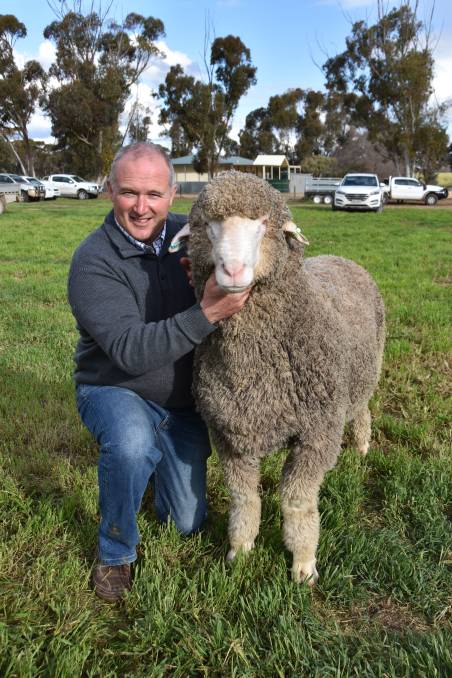 As the spring ram selling season gathers momentum, all signals are pointing towards a buoyant outcome as sheep producers make plans to rebuild their flocks.

According to industry experts, a bumper season coupled with more ewes to join and reasonable meat prices, means averages and clearance rates are on par, if not above last year's results.

Nutrien Ag Solutions stud stock agent, Rick Power, said in NSW sheep producers are in "the time is now" mode and rams are in hot demand.

"After western NSW and Riverina areas secured a lot of ewes from the west, plus off the back of one of the best seasons we have seen in years, they are already three-quarters restocked," Mr Power said.

"So the time is now. Those that have brought ewes are joining and breeding again."

Mr Power said along with regular faces, new buyers are appearing at sales, and by the result of the averages they are fully aware of what they have to pay.

He said feedback from the producers is most of them are in the game to start breeding Merino ewes again.

"I think the message has finally got through, it is not sustainable after the drought to be paying $300 plus for ewe hoggets in the spring, but it is quite easy to go and buy rams and start breeding sheep again," Mr Power said.

He said Merino sales are on-par or slightly above last year's averages and clearance rates are slightly better thus far, averaging $150 to $200 more, but it is the British breeds that are leading the race, up $600 or more.

"In the Merino sales there are more buyers registering and the averages are climbing. But when it comes to British breeds, their prices are up $600 and more.

"In a way it is detrimental to the wool industry, people always sacrifice the Merino ewe to join her to something else when the wool market is down."

He predicts this trend may see a shortage of Border Leicester rams.

"It's a big call, but I don't think there will be enough Border Leicester rams to supply the market," he said.

"I think once that happens, producers will use other breeds such as composites or Dorsets over Merinos."

The result was the best the stud has experienced with an average increase of over $700 on the previous year and a full clearance.

He said taking into consideration the failing wool market and COVID-19 pandemic, stud producers have been pleasantly surprised at their on-property sale results.

According to Mr Wallis, many breeders have catalogued more rams up for sale and even though in percentage terms their clearance rate is not as high as last year, they have actually sold more rams.

"Clearance rates, up until this stage of the selling season, have been very good," Mr Wallis said.

"Most sales are on par clearance-wise with last year and I'd say most averages are very comparable to last year."

Mr Wallis said graziers who run a joint Merino crossbred operation are now turning to breeding their own ewes as a more sustainable option.

"In the past they might have bought in an element of crossbred breeding ewes, but now they are considering the potential shortage of ewes and what it would cost to do that," he said.

"So they see breeding their own replacements as a long-term, more sustainable option.

"It's not over yet, but everyone is surprised as to how well it has gone. It is really positive given the current situation."

Ian Griffiths of Brundanella Merino and Poll Merino stud, Victoria Park, Grenfell, who successfully sold 98 percent of his rams at his on-property ram sale last week, said he had three to four new clients and more registrations than ever before.