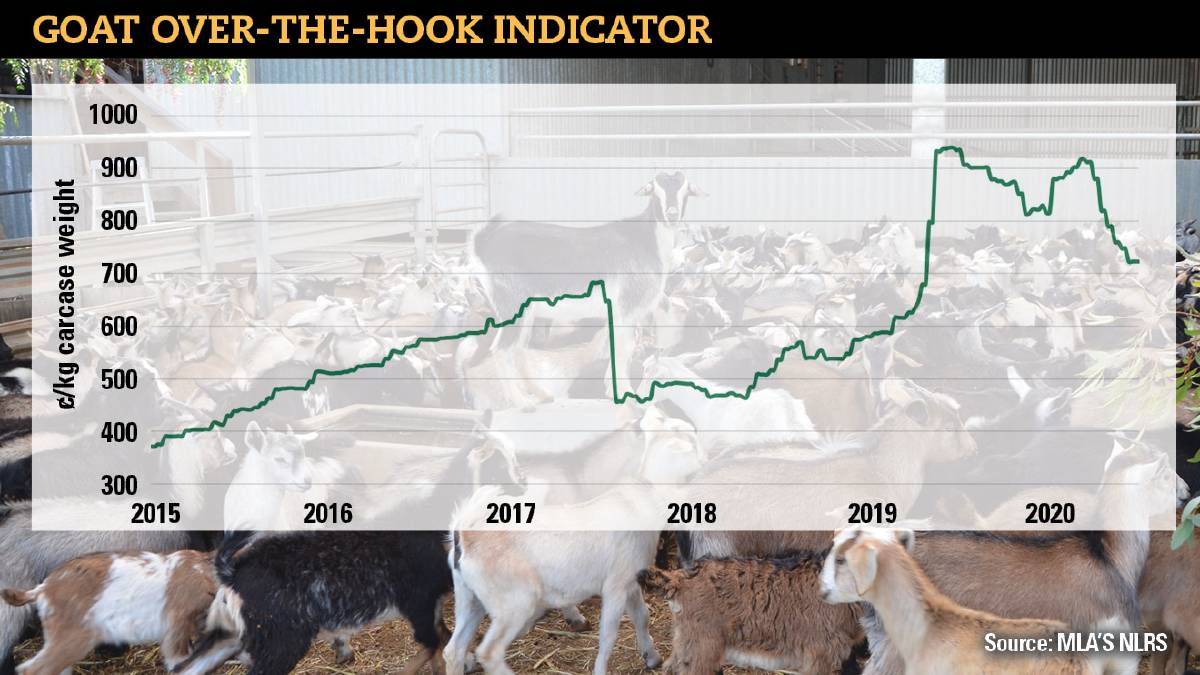 STEADY CLIMB: Goatmeat prices have been climbing for the past few years, and while they have come back from record levels last year, they still remain high.

DESPITE dropping from the record high prices reached in 2019, goat prices have remained at "historically high" levels, even as demand plummets in some key export markets.

DESPITE dropping from the record high prices reached in 2019, goat prices have remained at "historically high" levels, even as demand plummets in some key export markets.

The Meat & Livestock Australia on-hook price for July sat at $7.23 a kilogram carcaseweight, down from its record price of $9.50/kgcwt 12 months earlier, but at a similar level to the 2019 average price of $7.90/kg.

MLA senior market analyst Adam Cheetham said goat prices were at their lowest level since the start of 2019.

"But in a broader context, they're still very high," he said.

"The decline was amplified by the fact they've come back from (about) $10/kg but it's still historically high."

While the MLA figures put the highest price at $9.50/kg, he said many processors were offering quotes of $10/kgcwt last year.

Mr Cheetham said the drop in price was due to a decline in demand from several major markets, including the United States and Taiwan, due to restrictions caused by the COVID-19 pandemic.

The US makes up about 70 per cent of the export market, last year taking 14,059 tonnes shippedweight, while Taiwan takes 12pc or 2478t of Australia's goatmeat - predominantly as chilled whole carcases.

Thomas Foods International livestock manager Paul Leonard said the impact of the US decline was being felt through the supply chain, as the predominant restaurant trade had ground to a halt.

Despite that, he said many processors were offering prices from $8.50-$9/kg, with this aided by the relatively low throughput of goats.

"We've got limited demand but also limited supply," he said.

"In a reasonable year, processing normal numbers, we would expect to see more downward pressure on prices."

Mr Cheetham said the eastern states weekly throughput in July was back at 2000 head, which was a significant drop on the figures seen at the same time in 2018 and 2019.

"There is a lack of goats in the domestic market and it has kept the price at a buoyant level," he said.

Figures through to March this year showed Australian goatmeat production was already declining, with the national goat slaughter falling 7pc to 1.54 million head, with 234,064 from SA.

Despite this drop, goatmeat export values increased 29pc to $235.7m, on the back of rising prices.

Mr Cheetham said goat prices had particularly begun to climb in the past three to five years on the back of strong demand, especially from US markets, and a constrained supply.

He said these supply constraints were caused by drought in key production areas and the volatility of working with a rangeland herd.

While the vast majority of Australian goats are exported as frozen carcases, there is also a small live export market, with Malaysia among the biggest buyers.

Mr Cheetham said this market had been dropping off in recent years, and was significantly back since the start of 2020.

He said a major reason for this was the shut down of the aviation industry, with goats predominantly exported by air.

"We do typically see the domestic throughput of goats increase in August," he said.

"We expect the price should remain at historically high levels, comparable to the past few years."