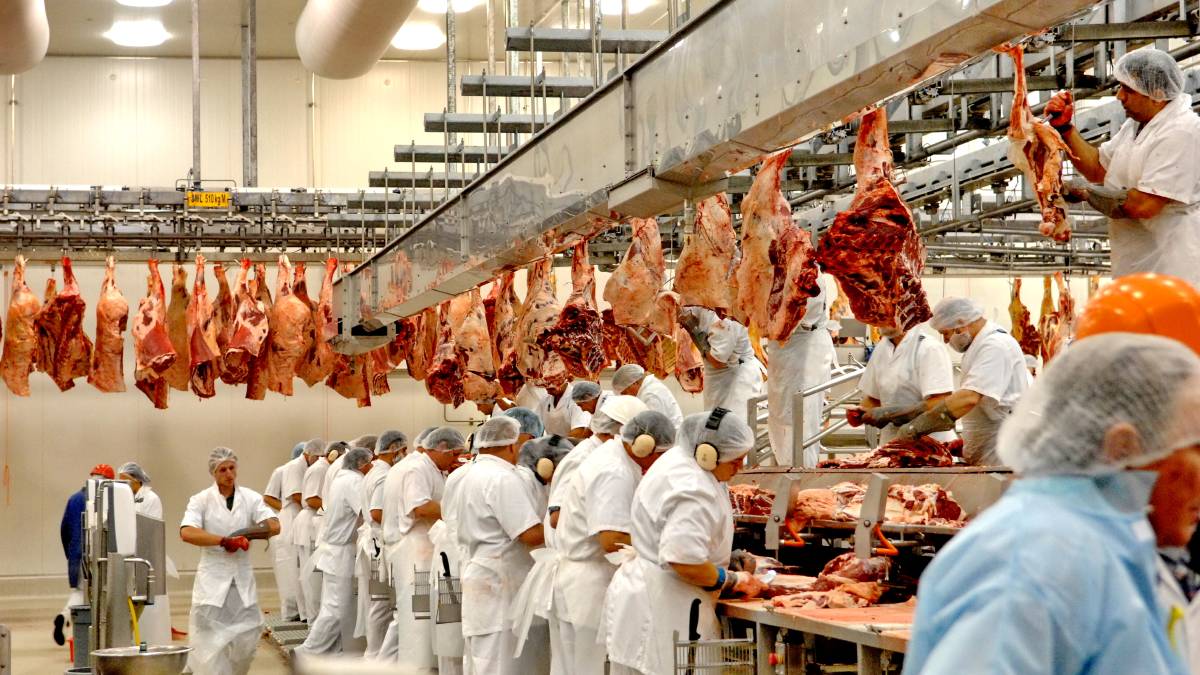 PRESSURE: The subdued state of the US beef import market is not good news for Australian lean beef exporters.

Ken Wilcock notes that a trifecta of bad news is keeping the US import market in a relatively subdued state.

LATEST report for week-ending July 31 has the price of indicator 90CL Blended Cow (US East Coast Australian/NZ Lean, FOB US Port) at a steady $US230/cwt (hundred pounds or hundredweight), basically unchanged since the beginning of the month.

In the same period the Australian dollar has strengthened from 69 to 71 US cents (or rather the $US has weakened) and this has acted to cap any potential market improvement.

Market analyst Steiner Consulting notes several other factors which in combination with the stronger $A will likely keep the US import market in a relatively subdued state.

One factor is the increased volume of Australian and NZ product pulled to the US by the massive spike in US wholesale beef prices caused by coronavirus-induced slowdown in US domestic production earlier this year.

Similarly New Zealand shipments to the US jumped by almost 10,000t in June while supply from Central and South America also stepped up.

A lot of that product is only now releasing into the US market, which Steiner believes is impacting spot market prices.

But South American supply looks to be very strong and the very weak Brazilian Real at just US19 cents means a big spread between Brazilian and Oceania grinding beef values.

Without a free trade agreement, Brazil would have to access the US market through the shared 65,000t Most Favoured Nation quota if it wanted to avail itself of minimal tariff.

Outside this quota, tariff reverts to 26.4 per cent.

But with the current weakness of the Real, Brazil may well be competitive even after paying the 26.4pc.

However for it to achieve volume in the US market sufficient to influence price, US end users would need to approve Brazilian product in their specifications.

Brazil's track record of food safety violations, which caused its loss of access to the US in June 2017, would be of concern to US brand owners and many might be inclined to adopt a wait-and-see attitude before committing.

Then if nothing adverse happens, it becomes an economic decision as to how long a business in a competitive environment can afford not to use the cheaper product.

Steiner seems convinced it is now only a matter to time before the cost side of the argument wins out.

That would seem a joyless proposition from Australia's perspective but unfortunately there would seem potential for even more downside in the US lean beef import market from what may unfold with US beef and dairy cow slaughter.

Drought in Texas, West Kansas, Oklahoma, Arizona and California is driving up beef cow slaughter. In the past four weeks numbers are up by 9pc on last year.

However dairy cows make up a significant proportion of total cow slaughter and there has been a decline in dairy cow slaughter that has so far matched or exceeded the higher slaughter rate in beef cows.

Retention of dairy cows is being driven by excellent milk and cheese prices, which in turn are largely a result of the US government's $3 billion food box program.

That program will come to an end on October 31, which suggests cheese and dairy prices will come under pressure.

The risk to grinding beef supply and price is that a potential decline in dairy prices and thus a return to higher cull rate will coincide with continuing beef cow liquidation from drought areas as well as normal autumn beef cow turnoff.

This points to a considerable increase in grinding beef availability and commensurate downward pressure on price.

And finally to make it a trifecta of bad news, latest figures from United States Department of Agriculture confirm a massive increase in US beef export sales activity.

USDA's Foreign Agricultural Service collects data from exporters on a weekly basis and compiles what it refers to as Outstanding Export Sales. Outstanding in this sense means uncompleted rather than extraordinary.

This is intended to be nothing more than a snapshot view of the current contracting scene for respective commodities. For various reasons the reported Outstanding Sales figures do not bear a consistent relationship to eventual export shipments.

That said, beef export activity for the week ending July 23 soared to 31,500t, an increase of 76pc on the week prior and a whopping 81pc on the previous four-week average.

Analysts commented that Japan and Korea were particularly active.

Last time around supermarkets dived into saleyards in search of cows to put through hastily arranged service kill arrangements in order to put beef mince on the shelves.

As yet there has been no mention of supermarkets adding to the buyer panel in early markets but prices are certainly up.

At Monday's Pakenham sale, heavy cows jumped to a top of 329c/kg.

Across the border at Wagga, heavy cows were 8c/kg dearer at an average of 303c and a top of 316c.

Complicating matters this time is the forced reduction in Victorian abattoir activity to two-thirds production.

"It is our opinion that this will lead to a reduction in saleable meat in the Victorian community," he said.

In the face of panic-buying demand, retailers will be keen for that shortfall to be made up from somewhere.

How far and wide and at what cost remains to be seen.

Grid rates meanwhile at Wagga and Naracoorte adjusted to 615c/kg for 4-tooth ox and 560c for heavy cow on Monday.