After many years of intense lobbying, northern Queensland local government and business representatives are celebrating the news that the Torrens Creek-Aramac Road will be fully sealed by June 2022.

After many years of intense lobbying, northern Queensland local government and business representatives are celebrating the news that the Torrens Creek-Aramac Road will be fully sealed by June 2022.

In addition, the road, which will give freight from Queensland's north an all-weather alternate inland route from Cairns to Melbourne, will be flood-proofed with the construction of a bridge across Prairie Creek.

The money for both projects is coming out of the Regional Economic Enabling Fund, part of a $1.5 billion Shovel-Ready Plan to invest in infrastructure announced as a response to the economic impacts of COVID-19, with 80 per cent of the funding coming from the federal government and 20pc from the state.

The REEF is comprised of a number of small-scale projects aimed at driving economic and regional growth and it's intended that local workforces will undertake many of the works.

Some $20m has been directed to complete the sealing of the Torrens Creek-Aramac Road while $10m will be put towards the Prairie Creek bridge, 108km south of the Flinders Highway.

Flinders Shire Council mayor Jane McNamara said the lobby for this work to be undertaken had been going on for more years than she cared to remember.

"This is a great win for a combined voice," she said.

It goes to show, if you tell people often enough how important these roads are, it gets results in the end - Flinders Shire Council mayor Jane McNamara

"The government has listened to us and we're very happy with the outcome."

Federal Assistant Minister for Road Safety and Freight Transport Scott Buchholz said he had the pleasure of visiting Torrens Creek with Cr McNamara and Senator Susan McDonald last year to see how important the sealing and the upgrade of the Prairie Creek Bridge were to those in the north west.

"When this vital link gets cut in the wet, communities, especially those in the Flinders shire can be stranded for many weeks," he said. "As the Assistant Minister for Road Safety and Freight Transport, I'm proud that the federal government is funding these important upgrades thanks to the extensive lobbying from Cr McNamara and Senator McDonald."

He said the works formed part of a $126.4m contribution from the federal government to the Regional Economic Enabling Fund, which will see 25 small-scale projects across regional Queensland underway.

Other projects include progressive sealing for the May Downs Road, the Richmond-Winton Road, the Cramsie-Muttaburra Road, and the Clermont-Alpha Road. Some $158 million of federal and state funding will be spent on road building projects in Queensland.

"The economic benefits for regional Queensland and the local communities will be enormous," Mr Buchholz said.

"Undoubtedly we will see a flow-on effect across the economies of the Flinders and Barcaldine shires as a result of this funding.

"These projects will improve road safety for all road users, improve connectivity to get more goods to market and increase freight productivity."

As well as decreasing road train travel time between North Queensland and the southern states by at least a third, thereby cutting truck maintenance, tyre replacement and fuel consumption costs, an all-weather road is expected to improve animal welfare outcomes and mean less bruising for stock and horticultural produce alike.

Barcaldine mayor Sean Dillon said the increased traffic would have a beneficial effect on Aramac and Barcaldine businesses.

"We welcome this sealing news with open arms - it's one of the biggest injections of road funds for some time," he said. "As well as having a beneficial impact on getting produce to Sydney and Melbourne, it gives us better access to boarding schools and health needs." 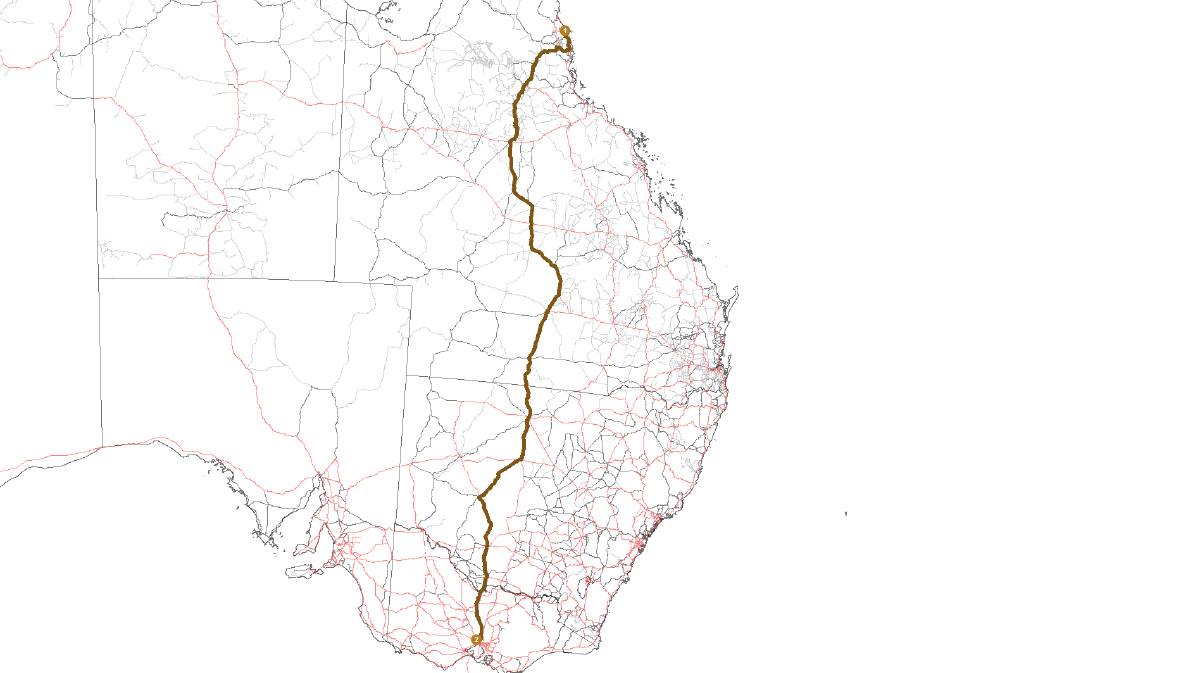 The shortest route from Cairns to Melbourne runs through western Queensland. Map supplied by CSIRO.

Cr McNamara said the Flinders Shire Council would be doing the work that was due to be completed by June 2022, along with $16m worth of work on the Hann Highway over three years.

She said the Inland Queensland Roads Action Plan had played an important role in the decision-making by outlined ways of achieving the 3000km, 300-bridge network upgrade it said was needed in a way that could be done by councils with their own workforces.

"All the data and costings were there so governments could easily work out what to fund," she said.