There has been a welcome change in fortune for farmers in the southern Mallee district of Quambatook this season. 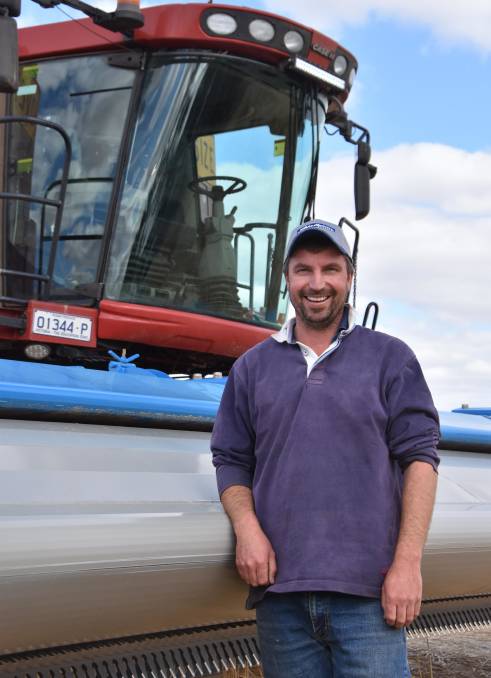 Matt Schlitz, Quambatook, with the new Shelbourne stripper front he is using for the first time this season. He says he is pleased with yields so far.

FROST may have taken the gloss off crop yields in some cereal and canola crops across the Schlitz family farm at Quambatook, but overall the family are delighted with results as harvest rolls on.

Matt Schlitz said after a tough 2018 the Quambatook area was enjoying a solid season.

"We had good summer rain and with a summer spraying program we've been able to conserve that moisture and that has helped the crops through another fairly dry spring," Mr Schlitz said.

Frost has had an impact, especially on earlier sown crops, but overall both yield and quality have been reasonable.

"Compared to the rest of the country we don't have anything to complain about."

"Even when you look at the areas nearby where they didn't have the summer rain we had it is nowhere near as good, so we've been a bit lucky."

Mr Schlitz said while there had not been a lot of spring rainfall the cool finish had meant there was no dramatic drop in yield.

"You get the moisture stressed crops and a couple of really hot days on them and they can hit the wall pretty quickly but this year they've got across the line."

Mr Schlitz said this year was the first year harvesting with a Shelbourne stripper front on the header.

The front is designed with rows of stripping fingers that pluck the grain or seed from the crop leaving far more straw than a conventional front.

He said it was working well, even in some of the cold and damp harvesting conditions of the past week.

Mr Schlitz said the flip side was that it was likely to mean a need for a disc seeder to get through the residue at planting.

7mm of rain around Quambatook over the weekend followed by unseasonably cool conditions have meant a frustrating wait this week however a return to fine and warm weather this weekend will allow farmers through the region to crank up to full speed once again.

The story Frost does not take the gloss off results in southern Mallee first appeared on Farm Online.