Skyrocketing demand from China, fueled in the short-term by the spread of a pig disease and longer-term by the growth of affluence, has soaked up the 2019 global market spotlight for Australian beef and lamb. 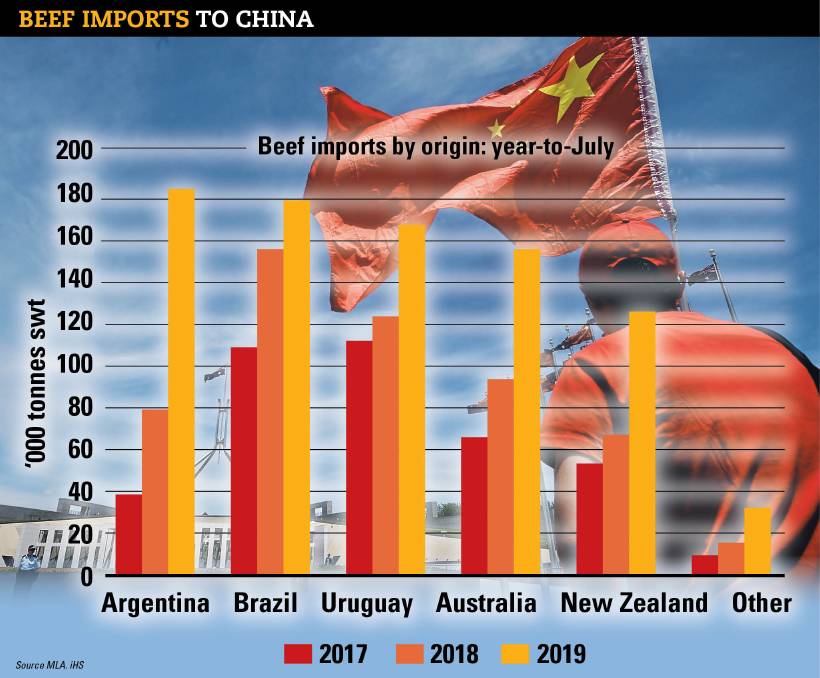 BIG IMPORTER: China's demand for beef, and all animal proteins, is red hot but Australia has plenty of competition in this space.

SKYROCKETING demand from China, fueled in the short-term by the spread of a pig disease and longer-term by the growth of affluence, has soaked up the 2019 global market spotlight for Australian beef and lamb.

China is a hot topic featured in Australian Community Media's Rare Vision publication, a wrap of how things have played out in the red meat sector during 2019 to be included in this Thursday's agricultural publications.

The Chinese pig herd has been cut in half by African swine fever, which has now swept into numerous other Asian, European and African countries. China is the world's largest pork consumer so the global animal protein trade was dramatically altered.

While Chinese consumers largely substituted poultry, for the first time ever China became Australia's largest export market for beef, with shipments jumping 65 per cent by mid-year.

However, it is the underlying fundamental shifts in Chinese demand for beef that Australia should be focusing on, rather than the ASF-related gains which will likely be short-term, analysts agree.

Beef exporters say the strength of the 'super quadrant' markets - China, the United States, Japan and Korea - is underpinning an optimism through the supply chain that is over-riding fears about the looming herd rebuild cattle shortages.

It is the growth in household wealth in developing markets like Asia that is the big driver of ever-increasing demand for Australian red meat.

Japan has the second highest number of households in that income bracket after the US. It has been Australia's number one export market by value for the past two decades.

The US has traditionally been a manufacturing beef market for Australia and demand for that product has continued to grow during 2019 in line with US consumption growth on the back of a strong economy.

The 2019 State of the Industry Report for the red meat industry shows Australia remains the world's largest sheepmeat and goatmeat exporter, and third largest beef exporter behind Brazil and India.

Australia sends product to more than 80 markets and exporters say diversification will remain a key strategy, allowing Australia to not only target niche markets that provide significant premiums but to mitigate exposure to factors outside the trade - such as politics.