Linda and Gary Nankervis are enjoying a good season right now, but know they can no longer rely on regular seasons. 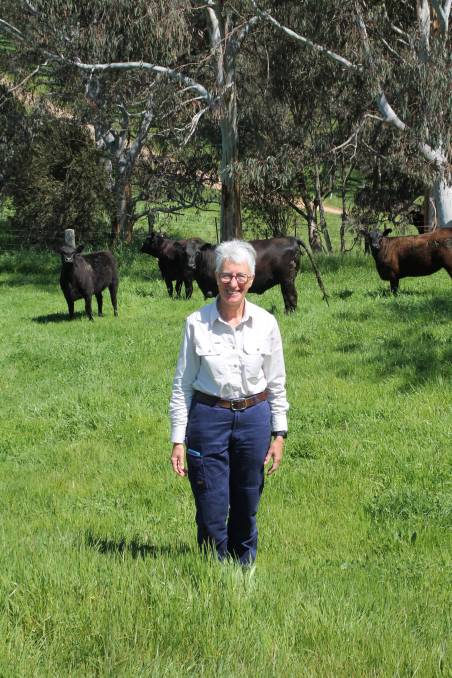 Linda Nankervis and some of their heifers.

Angus producer Linda Nankervis and her family from The Ranch, near Corryong in northern Victoria, are enjoying a great start to summer but they know they can't rely on that every year, now more than ever.

"If you've been farming here for a while you know that nowhere is drought proof now," she said.

"The climate has changed, and we're in a period of increased variability of climate and I'm speaking as someone who has decided to keep investing in farming because overall you have to be optimistic."

Nestled in the foothills of the Snowy Mountains, Ms Nankervis and her husband Gary have been on the The Ranch for 25 years, but the property has been in Mr Nankervis' family for over 50 years.

They've now been joined by their son Joe and are running a self replacing 300 cow Angus herd.

In a normal season they grow their steers and cull heifers out to 600kg at rising two years ld, and sell directly to JBS or Greenhams.

Earlier this year they were named the Victorian winners of the 2019 MSA Excellence in Eating Quality Progress Award.

"In the end, as with any business, it's about profit margins and we are paid more for animals that comply with buyer requirements," Gary Nankervis said at the time.

The operation is about to grow with the recent purchase of a nearby property which will be used for breeding.

"We'll use that block as cow country and will bring the weaners back here to finish them off.

"Part of the advantage in carrying these bigger cattle is that you can sell them younger if the season closes in on you.

"You gotta be reluctant to do it, but you could do it."

Ms Nankervis said when the season doesn't go as planned they are very much in the camp of keeping the breeding stock they've invested time and money in developing.

"We will try and keep the cows," she said.

"The first plan we put in place is that you sell everything that you can sell, so the steer portion goes.

The Upper Murray has had a wet winter and a good summer season is expected.

"In some years we've sold our heifer portion, and others we haven't joined our heifers to keep cow numbers down in the future.

"The feeling in the Upper Murray is that a good season is six months away, not two years.

"That's what you'd hope and that's our experience in the past."

An important part of the Nankervis operation is pasture management, with a mix of natural and introduced grasses, including phalaris which Ms Nankervis said has shown spectacular results.

Their efforts have been helped with the experience and knowledge their son Joe bought back to the family after working in the dairy sector.

"Gary's brother went into dairy about three years ago and Joe worked with him over that transition," she said.

"So he's seen a lot of the benefits that you can get from grazing using small cells, pushing your pasture production, and monitoring what you get as an improvement from your cattle.

"We are splitting up all the paddocks around the house, and we will graze them more intensively.

We've also been working with the tapes, which Garry hadn't wanted to because it's labour-intensive, but it's okay when there's three of you.

"Monday is tape day and we just move the cattle onto the next bit, and they've done fantastically well."

While she's not opposed to the growth in plant based proteins Ms Nankervis is worried about how it's labeled.

"People don't look too closely at labels they just go along and pick up what they think is a meat product," she said.

"Mum's next door neighbour picked up what she thought was a turkey roast, but I think it was tofu."

"Now if I go to the supermarket and want to buy tofu, it's nowhere near the cheese."

Those concerns aside she believes the industry will have to change and adapt to a future were meat isn't the main staple.

"As meat produces we need to to be thinking that people's diets are going to change," she said.

"Millennial's like our son Joe say that of course it's going to change, so we need to be in the market saying that we produce this fantastic celebratory product."