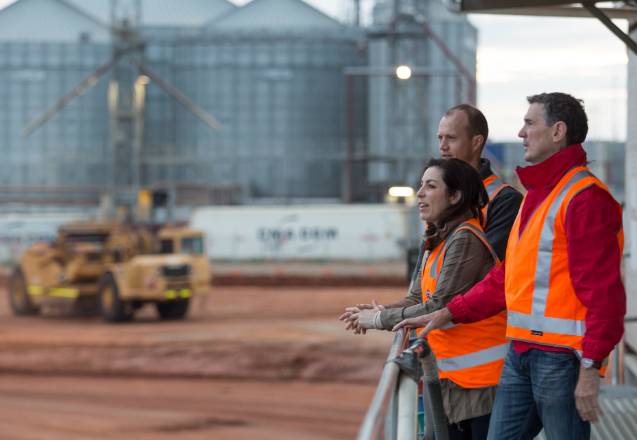 An Australian agtech start-up is making a successful foray into the lucrative North American market.

FLEDGLING Australian agtech business AgriDigital has made a big step with the company announcing its North America launch.

North America is widely regarded as the most competitive agtech market in the world, but AgriDigital is confident its products, including transaction, storage and connections models, will have a fit in the US and Canada.

The company launched its transactions module, which utilises blockchain technology to allow real time buying and selling of grain, almost exactly two years after the platform went live in Australia.

The groundbreaking US launch occurred at the bulk handling terminal of Arkansas-based Sustainable Ag.

Sustainable Ag has a presence across the south of the US, with grower members of the group producing around 40,000 tonnes of rice and 13,000 tonnes of corn and soybeans respectively.

AgriDigital handled a transaction of 921 bushels (25.09 tonnes) of corn.

President of Sustainable Ag, Mike Sullivan said his business was happy to be partnering with AgriDigital.

"Technology is a big part of our business these days and ensuring we have an efficient and effective digital solution to manage our grain from farm to our elevators and further down the supply chain is just the start," Mr Sullivan said.

He said he believed AgriDigital's blockchain solutions would fit in well with Sustainable Ag's operations.

"We have been on a journey for the past seven years taking our large-scale farming operation to the next level, and with the AgriDigital platform and its innovation in blockchain, this is exactly the partnership we have been looking for."

Sustainable Ag is currently processing around 75 deliveries a day using the AgriDigital platform.

AgriDigital officials were understandably delighted to get a toehold in the North American market.

"Our first transaction on US soil is an important milestone for us," co-founder and chief executive of AgriDigital Emma Westo said.

"The vision is to digitize and de-risk agri supply chains on a global scale and expanding our customer base to North America, one of the world's largest grain producers, is significant in achieving this.

"We said we would be launching in the North America in 2019 and we have".

She said the scale of the North American market made it an attractive option.

"North America represents an enormous opportunity for us, the grains market is around 12 times the size of the Australian market. "Launching into this market also helps us continue to grow and support our Australian customers, many of whom are facing another difficult harvest ahead" said Ms Weston.

AgriDigital plans to open a local North American office later this year to support its growing customer base across the United States and Canada.

The initial team on the ground will include sales, customer success and engineering staff and will be a mix of local and Australian employees.