Rural groups, politicians and Slim the dog campaigned for mandatory roll-over protection on the lawns of Parliament House this week.

One half of the federal parliament has endorsed the call from rural health advocates and farm organisations for mandatory quad bike roll-over protection.

Greens agriculture spokeswoman Janet Rice introduced a motion to the Senate calling on the Federal Government to "act to prevent future deaths by adopting the Australian Competition and Consumer Commission's recommendations in full".

The vote was endorsed by Labor the Greens and some crossbenchers but for roll-over protection to be mandatory a declaration is required by the Assistant Treasurer, who is responsible for the ACCC.

In February the ACCC issued an inquiry report which recommended government mandate roll-over protection on all new quad bikes sold in Australia. 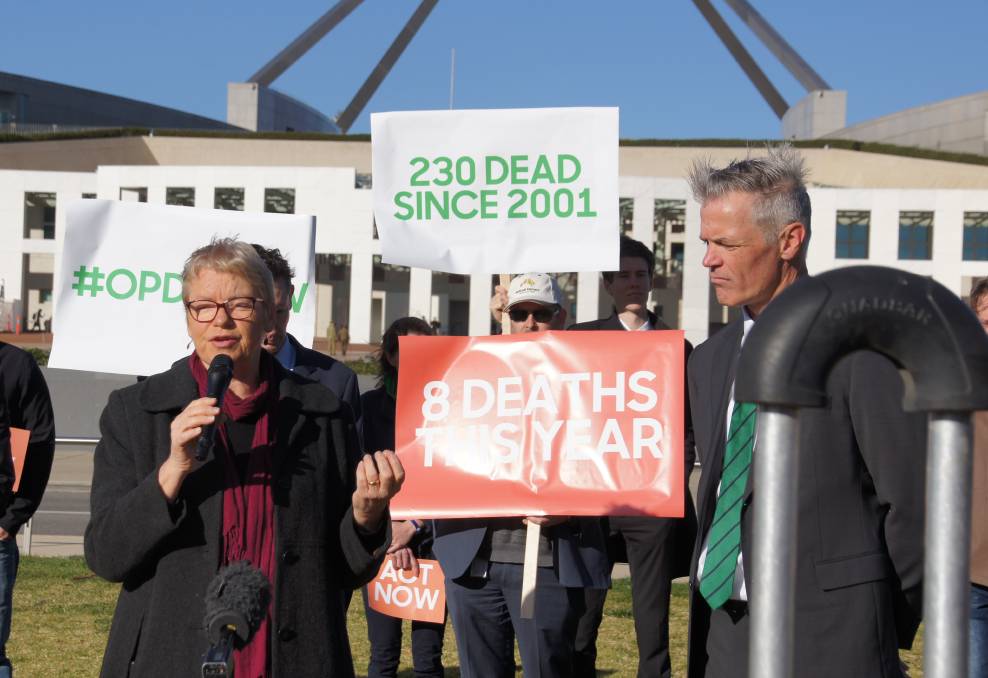 Greens agriculture spokeswoman Janet Rice at a quad bike safety campaign on the lawns of Parliament House. "There is such a simple solution and we know it will save lives. We need to act because there are people dying unnecessarily," Senator Rice said.

But the federal government responded to the report with an unexpected request, for the ACCC to conduct an unusual third round of community consultation.

Assistant Treasurer Micheal Sukkar, who is responsible for the ACCC, has said he would assess the latest round of consultation and respond in coming months.

There is such a simple solution and we know it will save lives. We need to act because there are people dying unnecessarily - Senator Janet Rice

"It speaks volumes that the Senate came together to emphatically pass a motion to call on the government to mandate operator protection devices (OPDs) on all new quad bikes within two years, as recommended by the ACCC," Ms Simson said.

"It's disappointing to say the least that the Liberal-National Government continues to turn its back on farmers on this issue.

"We again ask the question, how many lives need to be lost and how many life-altering injuries do farmers need to endure before the Government sees merit in this simple, but life-saving change?"

Since 2001, 230 people have been killed on quad bikes. About 60 per cent of all quad bike accidents are caused by roll-over.

They argue safety data shows roll-over protection can actually cause safety risks and that behavioural changes such as helmet use, as well as preventing children and passengers from using quad bikes, would be more effective.