A massive weight rise and a change of jockey confront French Hussler in his quest for a second consecutive bush plum in Saturday's Bedourie Cup. 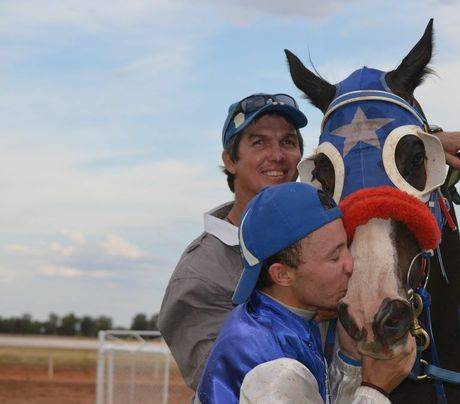 Can Birdsville Cup winner French Hussler give trainer Todd Austin two major victories in a week when he runs in the Bedourie Cup on September 14?

A massive weight rise and a change of jockey confront French Hussler in his quest for a second consecutive bush plum in Saturday's Bedourie Cup.

But French Hussler will need to shoulder 60kg, a rise of four kilograms on the weight he had in Birdsville.

As well, Gallagher will be an opponent after taking the mount on the David Jolly-trained Fulton Street.

Matthew Palmer replaces Gallagher on French Hussler, which will lock horns again with Fab's Cowboy hot on the heels of their Birdsville Cup clash.

Fab's Cowboy finished nearly three lengths behind French Hussler with 61.5kg at Birdsville but has the steadier of 66.5kg this time. He be will be ridden by Luke Dillon, who replaces apprentice Minonette Kennedy.

Cecily Eaton has been named as the rider for Cashing Up.

The Matt Kropp stable has scratched Splitz from the Cup and will run him in the Open Handicap (1000m) instead against the likes of Enjoyable, to be ridden by Wendy Peel, and Fully Maxed (Palmer).

The Harrovian will collect a staggering $287,000 if successful in the Cairns Amateurs Cup (2100m) at Cannon Park on September 14.

Owned by Tom Hedley and trained for him by former jockey Stephen Massingham, The Harrovian would claim the $87,000 first prize if successful, as well as a $200,000 bonus for the Northern Crowns Stayers series after winning previously in the Cairns and Townsville Cups.

Massingham has the widely travelled and immensely successful Robert Thompson, who has more than 4000 winning rides to his credit, down to ride The Harrovian and ex-Victorian hoop Noel Callow will be aboard stablemate Vassal.

Snippy Strategic will be the clear favourite for the John Gulley and Judy Keyes Memorial Open (1200m) at Clonclurry. Trained by Kerry Krogh, Snippy Strategic has won his past four assignments.

Seven horses have been declared as acceptors for the $10,000 Eric and Val Nobbs Memorial Thangool Cup (1600m).

King Max will carry the number one saddlecloth and will lead the field out of the enclosure followed by Don't We Love It, Craiglea Cetina, Follow On, Pastiche, Miazumi and Hulk Henry.

Claiming apprentice Elyce Smith will team with King Max, trained by her dad Fred Smith, and lightweight Thomas Doyle has the mount on Miazumi while Mackay trainer Olivia Cairns has booked Martin Haley for Follow On.

There is also weekend racing at Morven and Nanango.