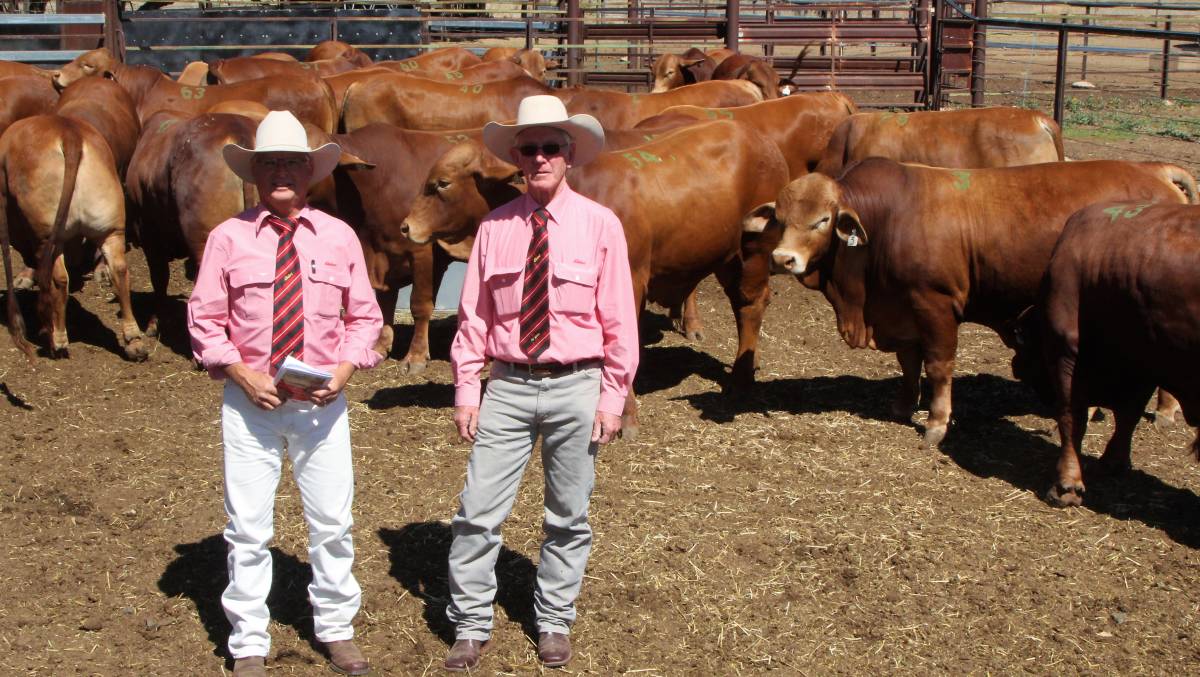 Clearance was king for Terry and Catherine Piggott at Wednesday's Aldinga Droughtmaster bull sale at the Springsure Showgrounds.

Clearance was king for Terry and Catherine Piggott at Wednesday's Aldinga Droughtmaster bull sale at the Springsure Showgrounds.

The presence of Western Australian buyers KAPCO, represented by Robert Murray, Elders Rockhampton, underpinned a healthy 100 per cent clearance of the 62 bulls on offer.

The Kimberley Agriculture and Pastoral Company, made up of four Indigenous-owned pastoral stations - Mt Anderson, Myroodah, Frazier Downs and Bohemia Downs - in the Kimberly region, purchased 75pc of the draft, largely with one bid.

Mr Murray said the group had been impressed with how the Aldinga bulls they purchased last year handled the conditions in north west Australia, particularly their inclination to "work wide".

"They're impressed with how they travel around the paddock. They'll go over Brahman cows over there," he said.

The performance of Aldinga bulls for Barlyne Pastoral's commercial clients in the extensive environment of northern Australia is what attracted the Edwards family to Wednesday's sale, paying the top price of $11,000 for Aldinga Justincase 199 (P).

Barlyne Pastoral is an original member of the Queenslander Cattle Breed Society and owner Jim Edwards ran a number of stations in the Pilbara region before that, and his son Johnny Edwards said the bull's figures, muscling, skin type and amount of bone were attractive to them. 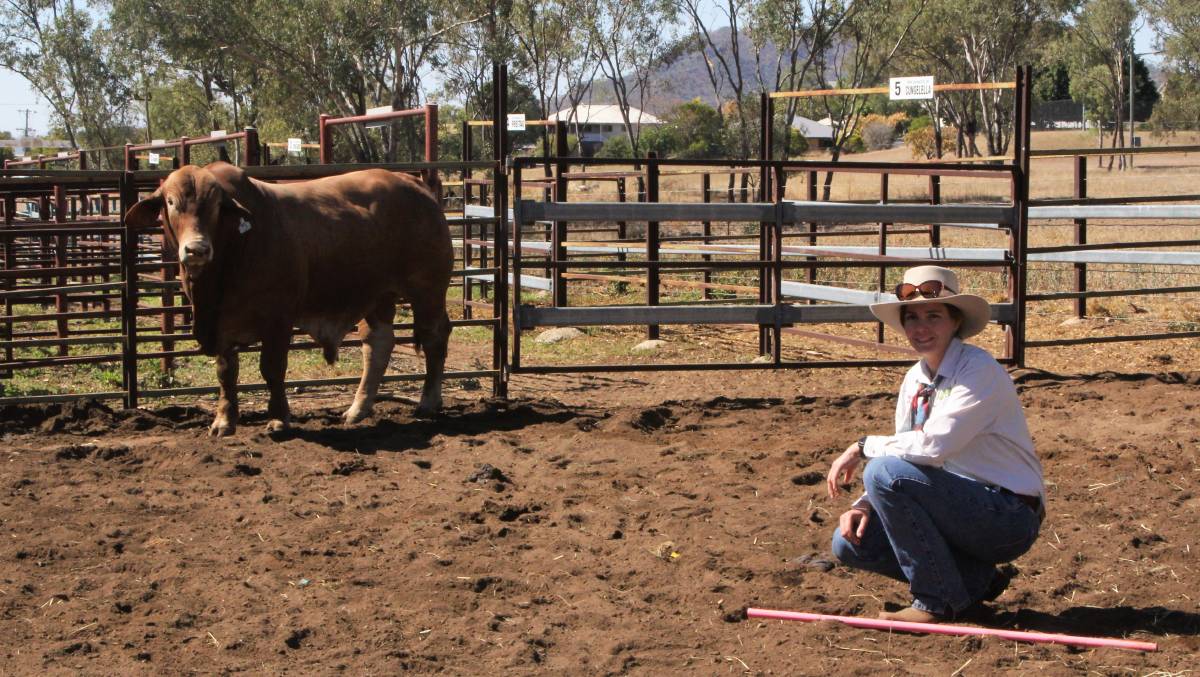 Aldinga Justincase, who topped the Springsure sale, with Hayley Piggott.

"Being homozygous polled, he's a good fit for our Queenslander operation," he said. "We've bought bulls by Aldinga sires that have been good for us so we thought we'd go to the source. Plus we're impressed with their fertility and temperament."

Mr Edwards said that as a single vendor sale, Aldinga offered a very even line of bulls.

Mr Piggott said he would be added to the number of good bulls and heifers sired for them by Aldinga Davy Jones, who had passed on his quiet temperament to his progeny.

Barlyne purchased one other bull at the sale, Aldinga 346 (P), for $4000, from a pure Droughtmaster bull and cow.

The second highest price at the sale was $8000, paid twice by Rodney Perrett, Bungawarra, Rolleston.

Each was bred from a pure Droughtmaster bull and cow and they each carried PP genes and were close in age at 23 and 22 months.

Hayley Piggott offered four bulls at the sale and it was the youngest in the draft, Taranguay Boombox (P) that brought the most money when the Flynn family from Valera Vale paid $6000 for him.

As well as showing good early weight gain and P8 and rib measurements of 12 and 7mm, the PP bull had the highest morphology count of 90. 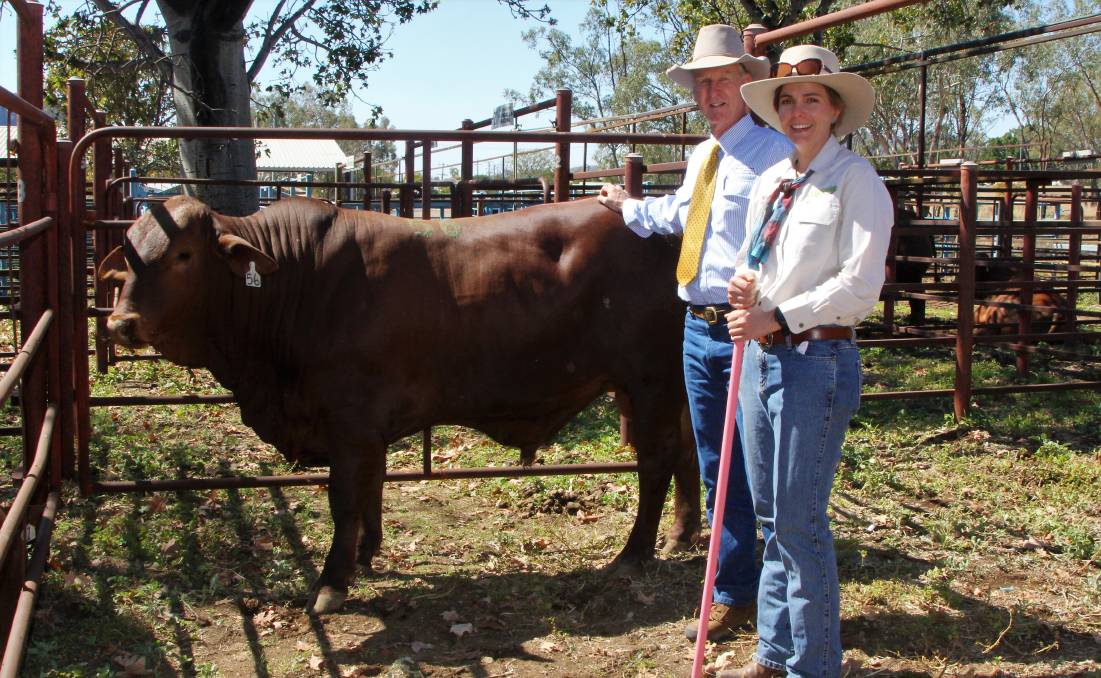 Valera Vale's Michael Flynn said they only looked at bulls with double poll genes and good morphology when they went to buy, but they felt the EMA for that particular bull, 121, was above average for the draft.

"We buy a bull most years from Aldinga - they run the same sort of show as us. They preg test and they have a real world commercial environment."

Mr Piggott said the sale had been a good day in a bad season.

"We usually sell a lot locally, double the numbers would come along," he said.

"More were coming from Western Australia too from the Pilbara north, it's getting drier and drier.

"Our average was down a bit but with the conditions the way they are, it was very good to have the 100pc clearance."

Twelve bid cards were given out for the sale.