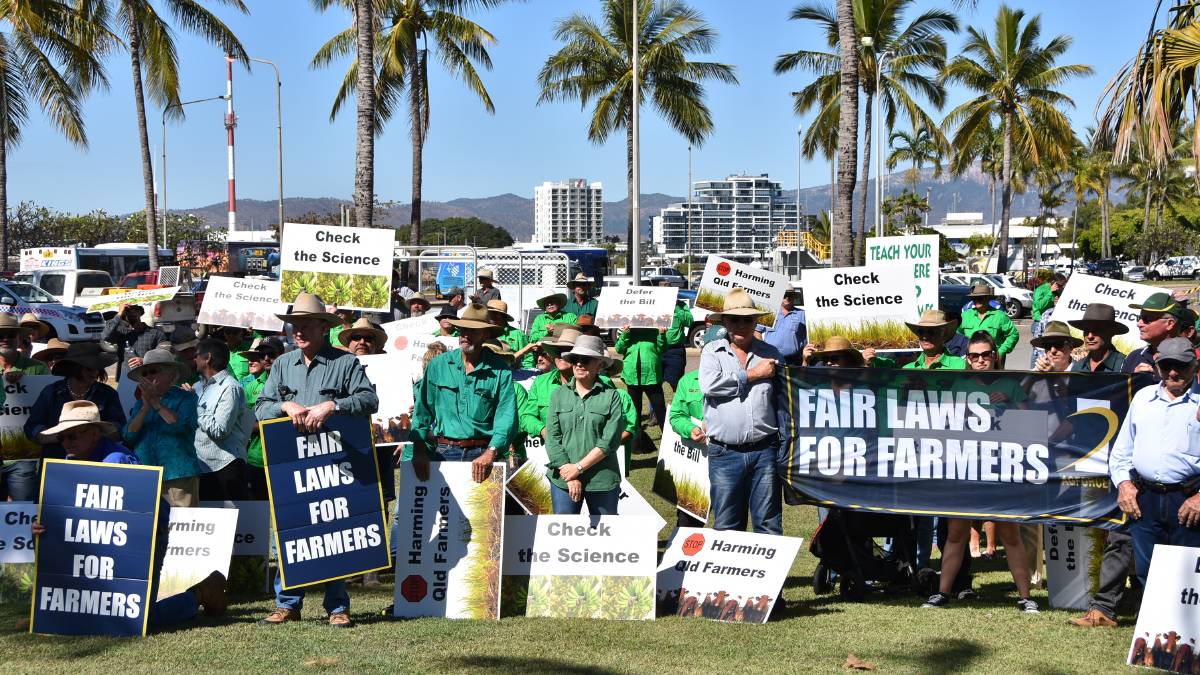 Farmers from across the North have protested the state government's proposed new reef regulations in Townsville today.

GROWERS and graziers from across North Queensland came together in a show of force to protest against the state government's proposed new reef regulations in Townsville on Tuesday.

A sea of green gathered outside the Townsville Entertainment Centre as politicians assembled inside for the first sitting day of regional parliament, being held in Townsville this week.

Premier Annastacia Palaszczuk and Labor MPs were noticeably absent from the rally, where the LNP's Burdekin MP Dale Last pledged to fight against the regulations in the chamber. 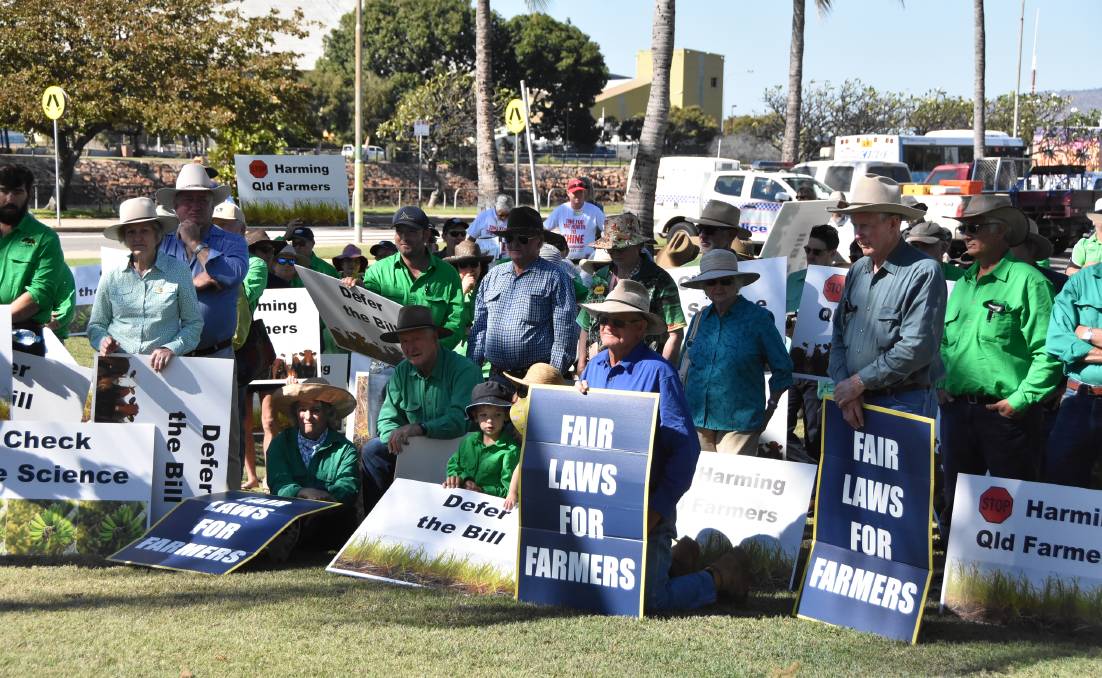 "If this bill passes, it will have the biggest impact on you as farmers in the history of this state," Mr Last said.

"This government will have you believe you're poisoning the reef with your fertiliser and chemicals and water run-off and I say that's bullshit. 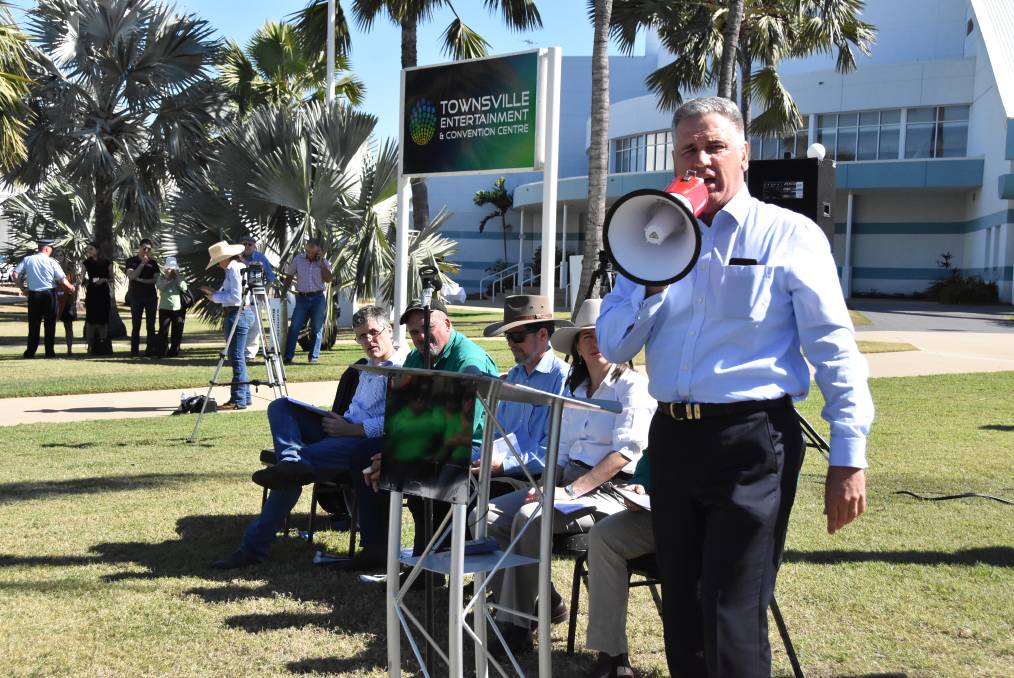 "Make no bones about it, some of our farmers are going to go to the wall because of this legislation and that's a bloody sad day for Queensland when that happens."

Mr Last urged the farmers to continue the fight.

Marty Bella fired up the crowd.

Mr Bella said the regulations would spell doom for industries and small towns.

"Everything we have given has resulted in them coming back and asking for more. It's an ideological assault on rural and regional Australia," Mr Bella said. 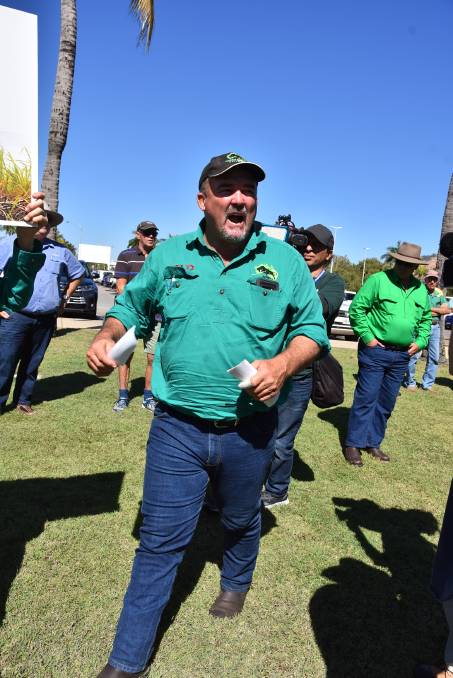 "It's a fight worth fighting. Better to die on your feet than live on your knees.

"We lose our industries up here and become glorified dole camps with all the associated socio-economic problems."

Controversial marine scientist Professor Peter Ridd, who won an unfair dismissal case against his former employer James Cook University for speaking out about the reliability of the science being used regarding reef health, addressed the crowd.

Dr Ridd maintains the regulations are based on flawed, unchecked science. 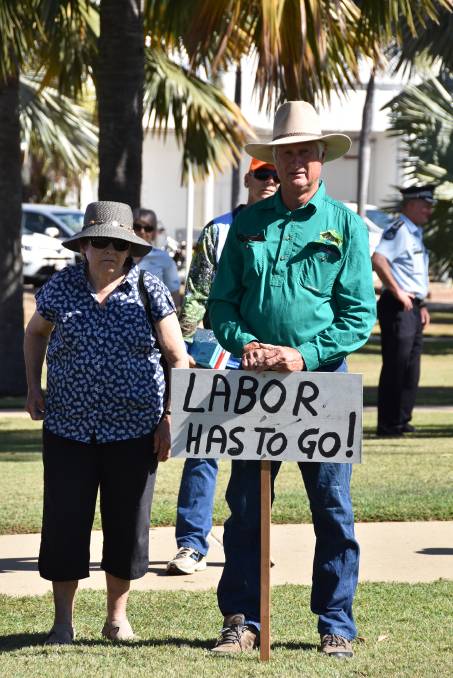 Farmers were passionate in the plea.

"It is not damaged, or dying or under any threat from Queensland farmers.

"But all Queensland farmers are under threat from government plans to bring in new reef laws based on unchecked science."

AgForce CEO Michael Guerin pleaded with farmers to keep up the fight.

"The sad fact is that we wouldn't be here at all if the state government had listened to us in the first place," Mr Guerin said.

"But unfortunately, this government has chosen a winner - and despite their rhetoric, it is not regional Queensland, it is not agriculture and it is not farmers.

"The flawed, unfair and ineffective reef protection bill we are protesting today is the latest in a long list of decisions that almost look designed to nobble agriculture in this state.

"We all want the same outcomes - healthy landscapes and reef, strong and viable agriculture industry, and vibrant communities."

The Environmental Protection (Great Barrier Reef Protection Measures) and Other Legislation Amendment Bill will be voted on in parliament in coming weeks.