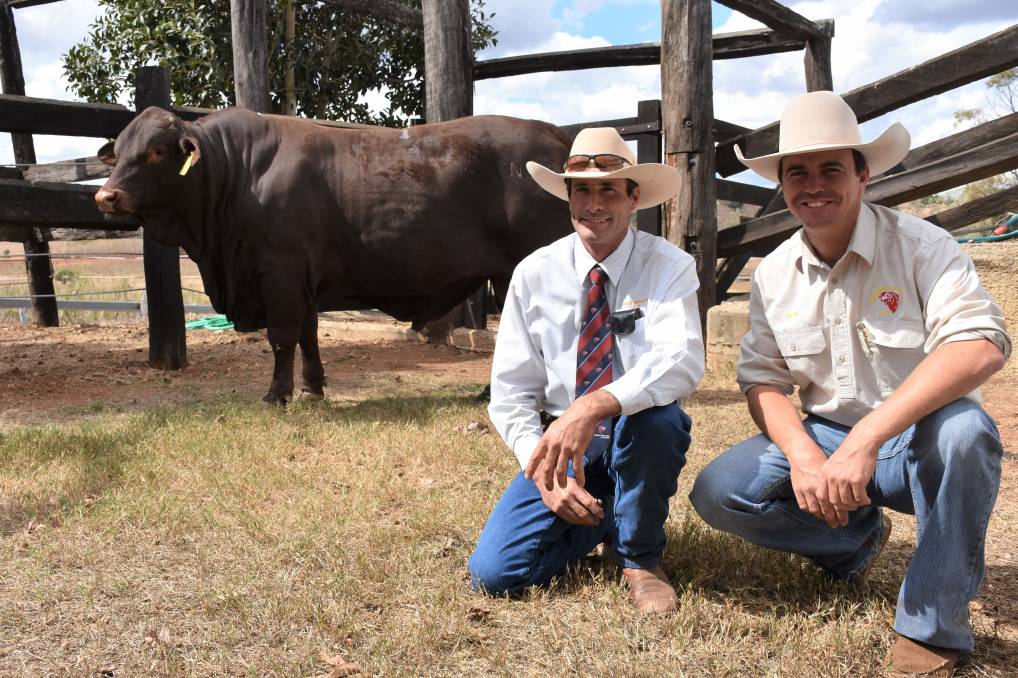 The outcome of Cree's fifth on-property sale was better than expected given prevailing tough climatic and economic conditions.

NOT so long ago Shaun and Jo McGuigan, Cree Santa Gertrudis, Kiah, Thangool, raised eyebrows when they spent $70,000 to acquire a young son of Wightfields Downpour G21 (P).

Known as Rosevale King K88 by the industry - and simply as King by the McGuigans - he has become a living goldmine and again carried the day at an on-property auction on August 30.

When the dust settled on the sale, conducted as an open auction and also under the Helmsman system, the aggregate reached $437,500, yielding an average of $8101.

"We normally average between $12-13,000 for the open auction but we usually have only 20 of them for the Open Auction and we had 27 this year, with the remaining lots selling under the electronic Helmsman System," he said.

"We put an extra 30pc of bulls up and got 100pc clearance in the open auction and that the average is so healthy is very pleasing. We had buyers from Daintree in the north, south to the Brisbane Valley and out to Augathella and Aramac."

Mr McGuigan believes the extensive data sets, which identified key Estimated Breeding Values (EBVs) for each lot in the catalogue, underlined accuracy and proven genetic performance. The data complemented thorough analysis on each bull, including maternal lineage, and morphology testing of each lot with a AACV is important assurance while buying a new sire, he said.

He said it was impossible to ignore Rosevale King's impact, adding: "He sired the top lot and eight of the first 10 lots in the catalogue were sons of his. King has been a relevation for us."

Cree King, the 29 month-old son of Rosevale King and Cree K033 (P), a daughter of Canowindra Jag J26 (PS), took the eye of bidders as soon as he walked into the ring.

As auctioneer Wayne York, York Auctioneers Emerald, introduced Cree King N216 (P) as Lot 1, there was immediate interest in the 884kg youngster with an EMA of 124sq cms, Rib fat measure of 10, scrotal circumference of 37.5cm and morphology of 85pc.

After frenetic bidding he was knocked down to repeat buyers, the Dillon Family, Surbiton Station, Alpha, for $20,000. He was above average across all traits with Export Index and Mature Cow weights in the top five percent and 600 day weight, DTC and Domestic Index in the top 10pc.

TVF Pastoral was another repeat buyer with the largest volume, snapping up 19 lots to average $7289 with bulls going to Caladonia Aramac (10 lots), Albro Clermont (seven) and Glenbar Theodore (two).

Sixteen lots attracted five-figure bids, one of which was the 856kg Cree Pancho P144 (P) with key statistics such as an EMA of 130sq cm and a scrotal circumference of 37.5cm, Listed as Lot 11, the younger relation to Leroy L192 (P) sold previously for a Cree record of $40,000, went to Ian Walker, Strathmore Santa Gertrudis Stud "Ravensbourne Station", Blackall, for $15,000.

Repeat buyer Waterford Grazing paid $14,000 for Cree King N212 (PS) listed as Lot 8. Tipping the scales at 782kg, he was the highest indexing bull in the catalogue.

Lot 19, Cree King P130 (P), featuring above average performance for all traits expect 200 day weight with his fertility and $ Index in the top 10pc, sold to GA Greenup Rosevale Stud, Jandowae for $11,000.