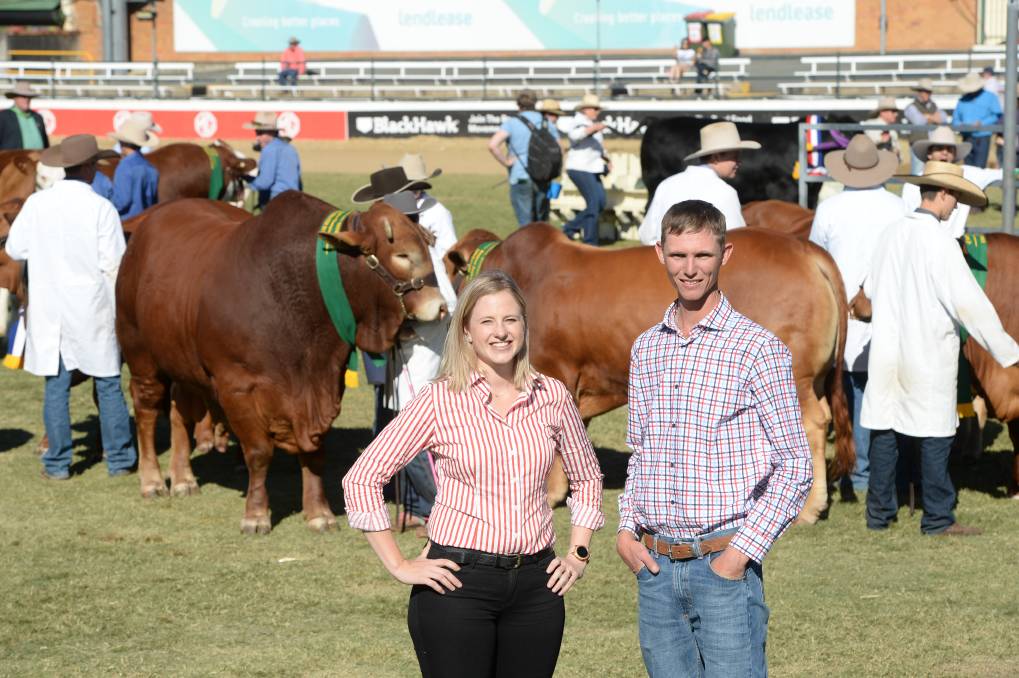 Emerging leaders: Shannon Landmark and Luke Evans travelled to the Ekka as part of their mentoring through the Zanda McDonald Award program. Picture: Rachael Webb.

Two young guns are making great strides in the northern beef industry, proving the future of agriculture is in safe hands.

TWO young guns are making great strides in the northern beef industry, proving the future of agriculture is in safe hands.

The passion and commitment to their chosen careers has seen Queenslander Shannon Landmark and the NT's Luke Evans offered a unique mentoring opportunity under the Zanda McDonald Award, which recognises outstanding young professionals in the ag sector.

Ms Landmark, 28, was born in Mount Isa to a mining family, and garnered an interest in agriculture throughout her time in regional Queensland.

After three years studying vet science, Ms Landmark deferred to work for two years on a cattle station in the NT and her career path was set. After graduating, Ms Landmark worked in mixed practice operations on the Atherton Tablelands and then Charters Towers, where she was given the opportunity to lead the Northern Genomics Project, through the University of Queensland. Ms Landmark coordinates the program which involves about 30,000 head across 54 properties in Queensland, NT and WA.

"The project aims at developing a DNA test suitable for northern cattle and what we're particularly interested in is fertility, so we're looking at DNA markers for puberty and whether they have the ability to re-breed," Ms Landmark said.

"Fertility is one of the big drivers of profitability and productivity in the north so we need to focus on that a bit more.

"I'm really passionate about genetics and genomics and I'd love to see that through to adoption. I think it's a tremendous thing for our industry."

Ms Landmark said the Zanda McDonald Award had given her the opportunity to network with some of Australia and New Zealand's greatest agricultural minds.

Mr Evans, 29, grew up in Tamworth, NSW, and always had an interest in agriculture. After finishing school, he worked on a cattle property in North Queensland before heading overseas. On his return, he went contract mustering before being appointed station manager of Rockhampton Downs Station, a 485,000 hectare cattle station in the NT.

For seven years, Mr Evans has been at the helm of Rockhampton Downs, running about 20,000 to 25,000 Brahman females, breeding predominantly for the export market.

Mr Evans not only runs the significant operation, but also mentors' youth, and provides on-the-job training and employment opportunities at the property.

He said he was at a crossroads as to where his career would head next, but said the connections he had made through the Zanda McDonald Award had propelled his knowledge forward years in advance.

"I could not think of a better thing to introduce me to the big players and take it to the next level. This has fast forwarded me years with the contacts I've made."

The mentor program, in its fifth year, is supported by Platinum Primary Producers.