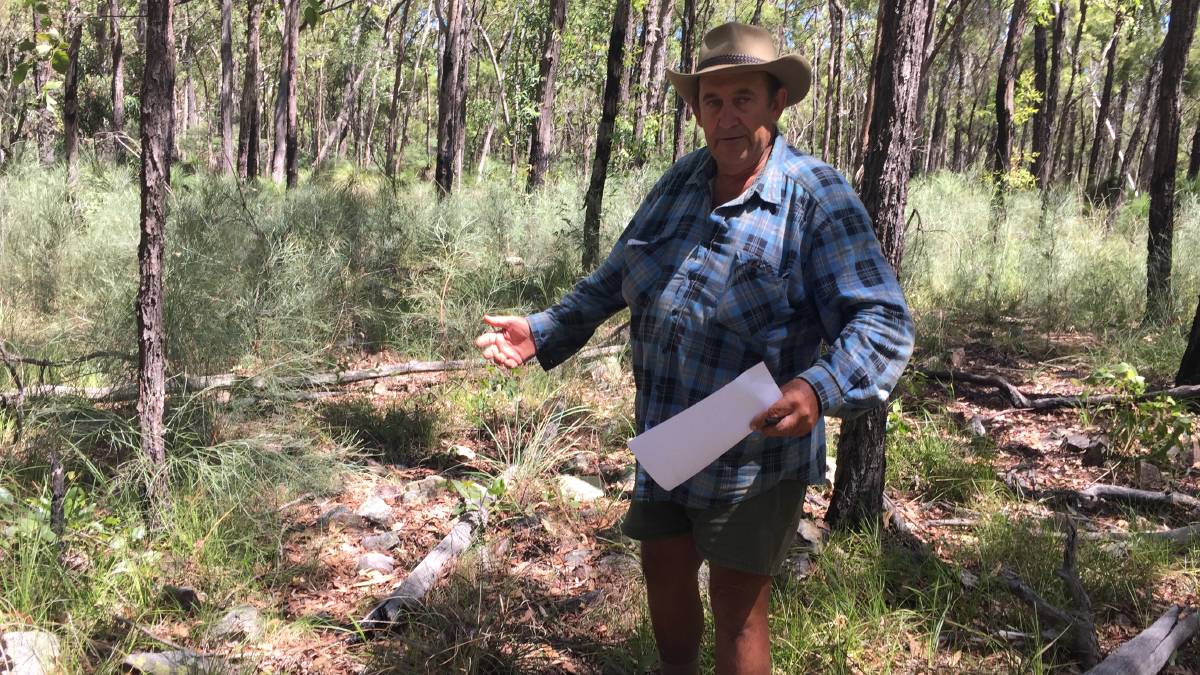 Boonah landholder Bruce Wagner says he is amazed by the errors in trigger mapping being produced by the Queensland Government.

Flora survey trigger maps designed to protect Queensland's rare plants have been exposed as a joke.

QUEENSLAND's new flora survey trigger maps designed to protect Queensland's threatened or endangered plants have been exposed as a joke.

Queensland icons including both Suncorp Stadium and the Gabba are mapped as 'high-risk areas' where endangered, vulnerable or near threatened plants are present or are likely to be present. Also covered are canals on the Sunshine Coast, the Dalby, Charleville and Blackwater airports as well as mines and coal stockpiles in Central Queensland .

Even clearly cultivated paddocks are mapped as being 'high-risk areas' while areas where it is possible to imagine there may be a concern - such as the Condamine River - remain untouched. 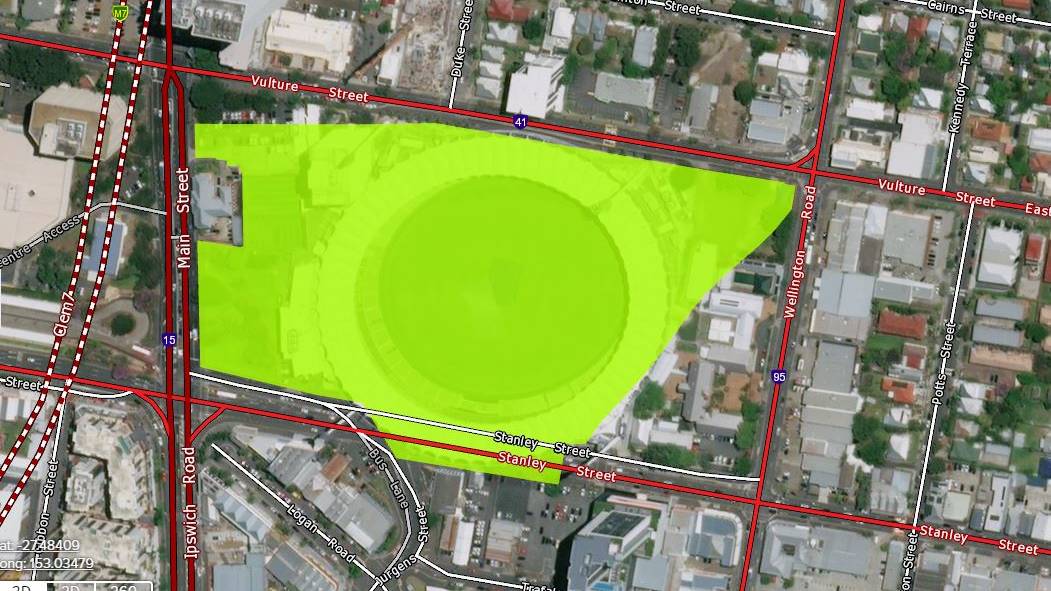 The Gabba in inner-city Brisbane is a mapped 'high risk' area.

In addition, on some maps the trigger areas follows fence lines. Areas of forest also appear to have random markings, despite the country for all intents and purposes having the same appearance. 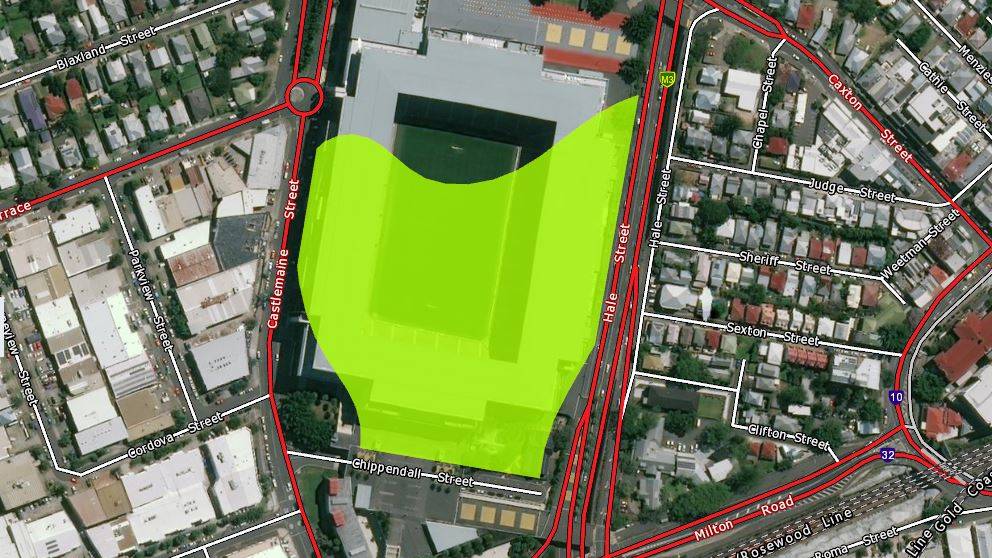 Suncorp Stadium is covered by a flora trigger map.

Under the new mapping system the previous 2km circumference blue dots have morphed into green splotches.

The maps, which can be generated using the Queensland Globe, are based on information provided by the Queensland Herbarium, an organisation long criticised by farm groups.

Adding insult to injury, the presence of a trigger map on a property may oblige landholders to engage professional to conduct a flora survey at their own expense. 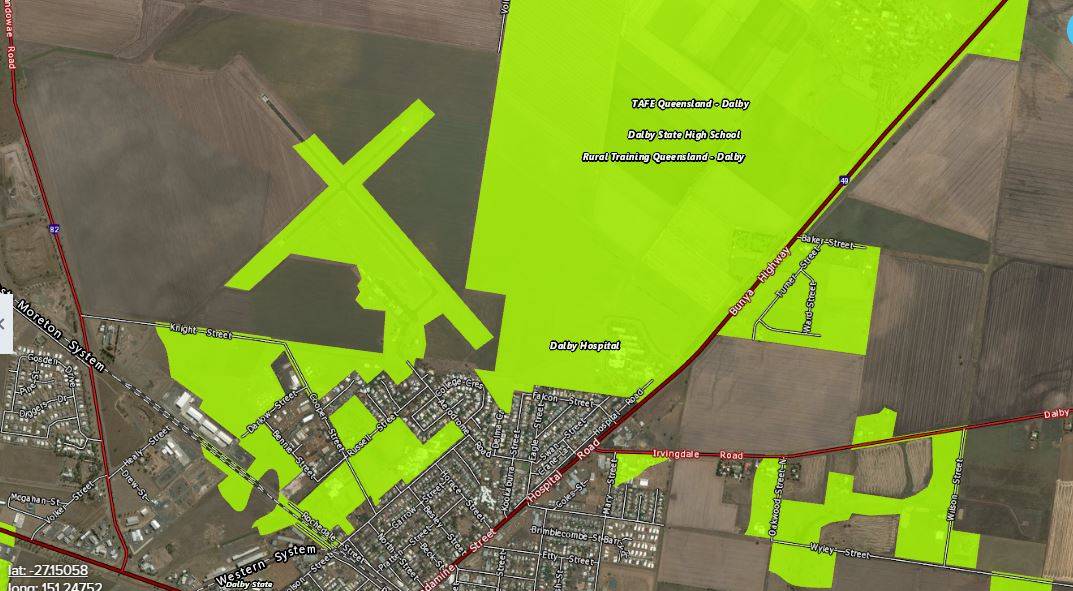 The bitumen runways at Dalby Airport and the Dalby Training College, including cultivation areas are mapped as being high risk.

Boonah landholder Bruce Wagner, who alerted Queensland Country Life to the failure of the system, said he was amazed by errors in the mapping.

"They had better call off the next State of Origin and Sheffield Shield matches," Mr Wagner said.

"No-one knows where or what the threatened or endangered plant is.

"What if someone treads on the plant the government is supposed to be protecting?" 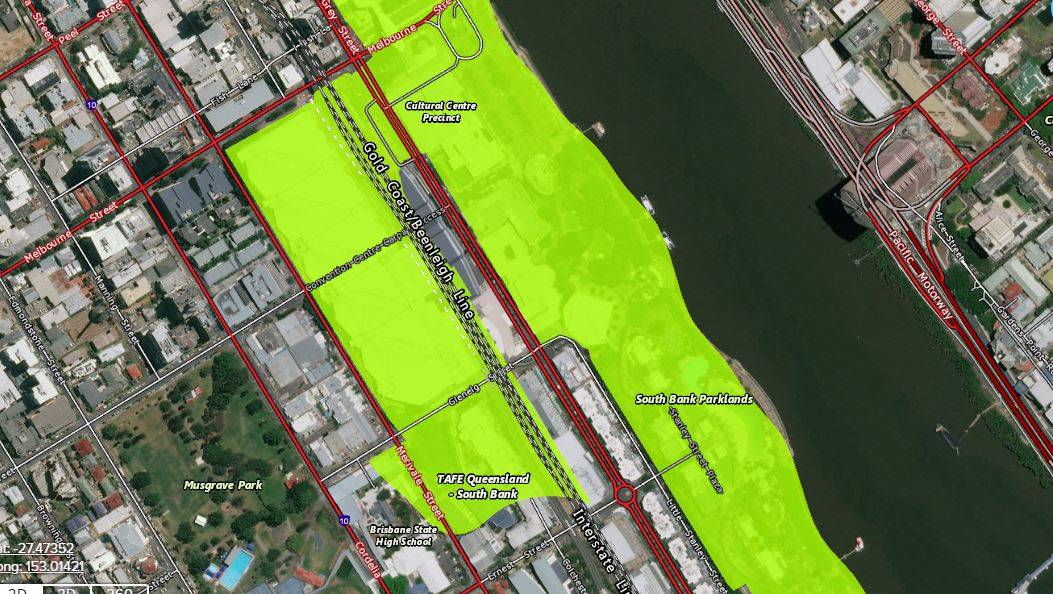 Even the Brisbane Convention and Exhibition Centre and the artificial Southbank Parklands don't escape.

Mr Wagner said the inconsistencies were staggering, saying he could not understand how Environment Minister Leeanne Enoch and the head of the Queensland Herbarium could continue in their roles. 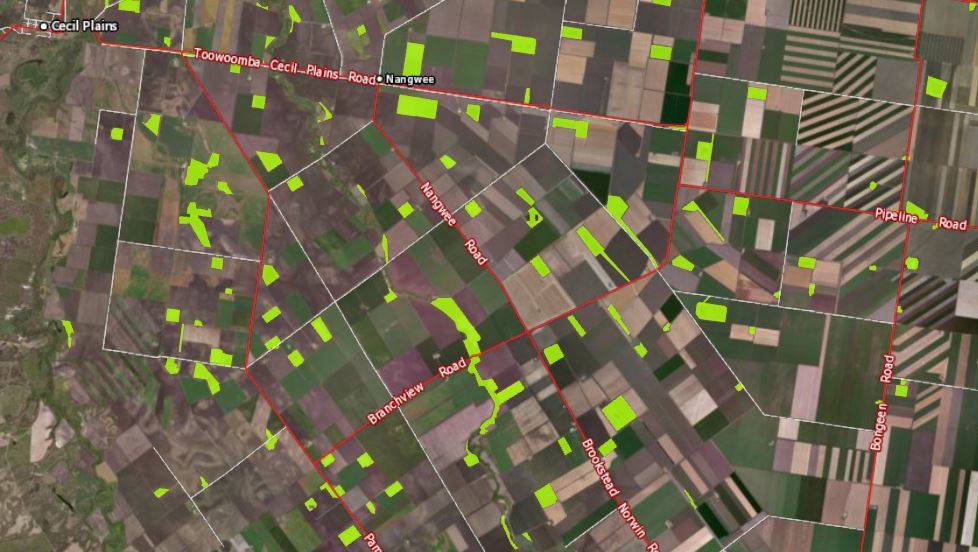 Area of cultivation and water storages are mapped as 'high risk areas' while the Condamine River (far left) is untouched.

Queensland Country Life has sought a response from the Queensland Herbarium but was referred to the Department of Environment and Science.

Questions put the department include:

- Does the Department of Environment and Science have confidence in the trigger mapping process?

- Should landholders have confidence in the Queensland Herbarium?

- Why are these errors occurring?

- What is being done to rectify the errors?

- Why won't the department indicate to landholders the species or exact location of threatened or endangered plants within mapped areas?

The Department of Environment and Science said in a statement it had confidence in the data held in the Queensland Herbarium that was used to generate the trigger map.

"Queensland has 225 endangered, 484 vulnerable and 235 near-threatened plant species. The protected plants clearing framework under the Nature Conservation Act 1992 is the main way to ensure they are protected and conserved for current and future generations," the statement reads.

"The protected plants flora survey trigger map identifies 'high-risk' areas where endangered, vulnerable or near-threatened plant species are present or are likely to be present.

"The trigger mapping is derived from known locations of endangered, threatened and near threatened plant species listed under the Nature Conservation Act.

"Information about the location of endangered, vulnerable and near-threatened species is available via a number of websites, including the Queensland Spatial Catalogue and Biomaps. However, to reduce the risk of poaching, some plant records are kept confidential.

"Most of those locations are backed by authenticated plant specimens held in the Queensland Herbarium. These known locations are then buffered by a 2km radius, which is why areas such as Suncorp Stadium, the Gabba and canals are shown as high-risk areas as they are within this 2km radius.

"The data within the maps comes from the best available databases, satellite imagery and aerial photos and is reviewed and, if necessary amended, at least once every 12 months to ensure the map reflects the most up-to-date and accurate data available.

"Areas that are highly modified are removed from the resulting map. This is done using the areas mapped by Queensland Land Use Mapping Program (2018) as cropping, horticulture, manufacturing, industrial and urban/residential land use.

"People can also submit land use information about an area via the Land Use Survey App. This data is also used when updating maps."

The statement says landholders also have the option of asking for amendment of the protected plants flora survey trigger map (whether or not they plan to clear an area), if they think the mapping needs reviewing. Details are on the DES web page. 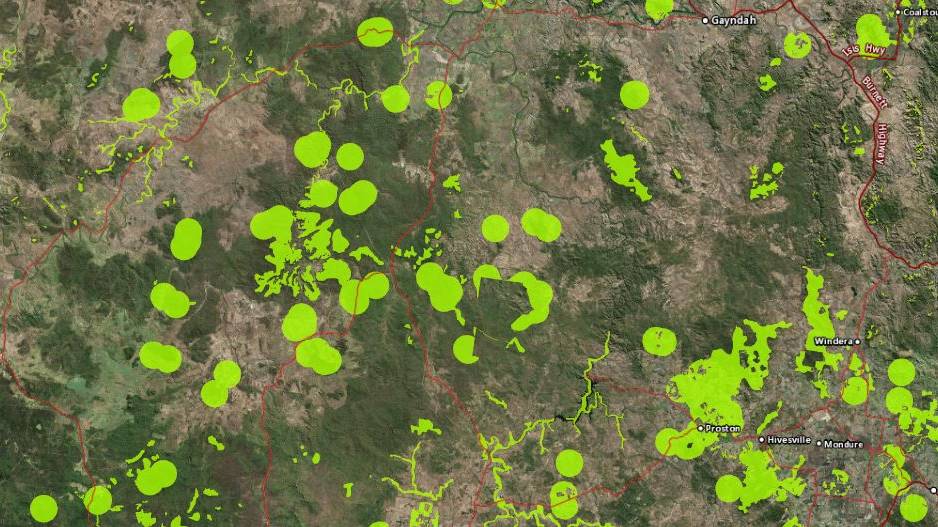 The location of trigger maps appears to be random.

AgForce chief executive officer Michael Guerin said the Department of Environment must be able to provide up-to-date detail to landholders needing to manage vegetation in a mapped area.

This included naming the protected species, the distribution and density of the species, and the date the plant was identified within the mapped area, he said.

Mr Guerin said AgForce believed both category X on vegetation management maps and land that was subject to fodder harvesting areas should be exempt from the protected plants regulation. 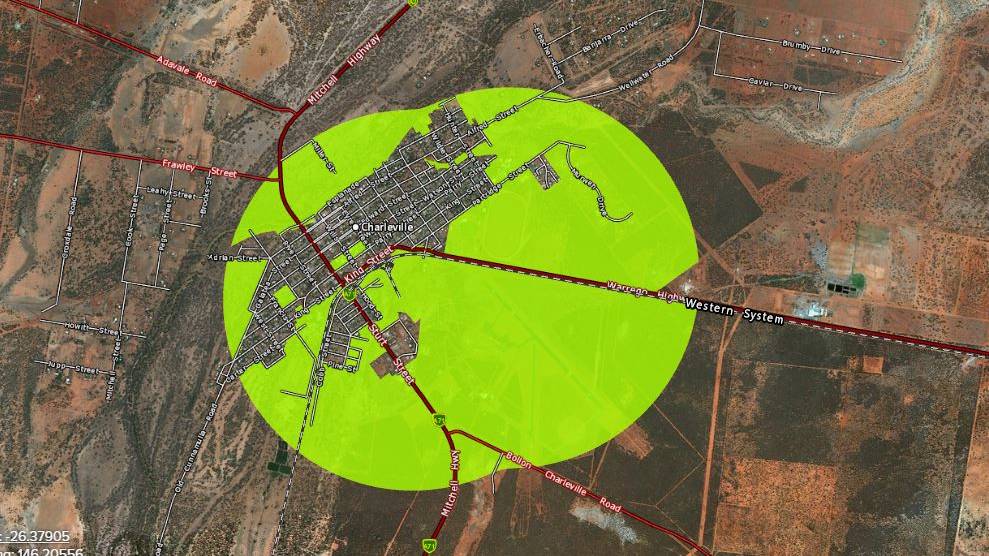 "By having maps not properly assessed by the government and then forcing them on landholders to prove otherwise destroys confidence in the whole system," Mr Crisafulli said. 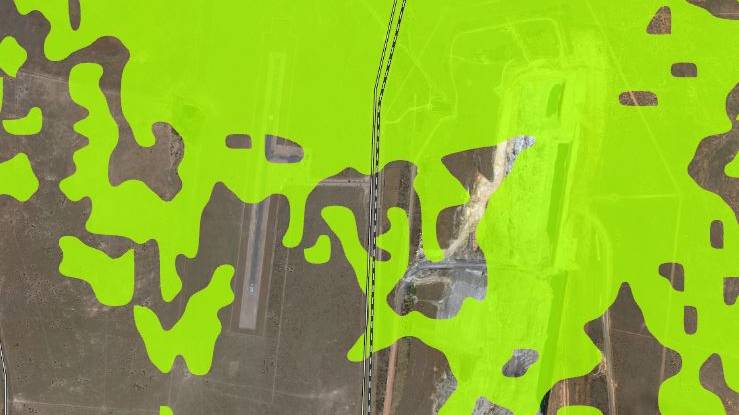 "Landholders have to spend thousands of dollars on consultants to get these trigger maps removed, yet the government is just dropping them willy-nilly.

"We need mapping that gets the balance between the environment and landholders right so the community can have confidence in the system."

Trigger maps can be accessed using the Queensland Globe. However, it is not a straight forward process.

How to view the Qld's flora trigger maps

- Then click on Layers in the left hand menu.

- Click on Add Layers, indicated by a white cross on a blue circle.

- Click on the square for Protected Plants Trigger Map.

- A map of Queensland should then appear.

- To unlock the high risk areas, scroll down to Imagery and Base Maps and click off the green square (click twice).

- Zoom in to see the affected areas.

Sponsored by
Where are those clever marketing campaigns and good vibes which gave milk the advertising oomph it needs today?
Test
Record result for Pearce family of Telpara Hills stud.
Test
Hefty legal costs to defend its application for Fair Go Dairy Logo have forced QDO to withdraw.
Test
It is important to put into practice now policies and procedures to manage the risks of COVID in your workplace.
Test
Richmond and Hughenden are the preferred locations for a gin that could directly employ up to 35 staff and cost $35m to build, a feasibility study has found.
Test
An idea to host a brunch and raise money for breast cancer survivors that ended up raising $11,000 last year has spurred two Julia Creek women on to a bigger and better event at Sedan Dip on October 2.
Test
Numbers lifted to 2050 in Blackall this week.
Test
Numbers more than doubled to just under 1900 at Emerald on Thursday.
Test