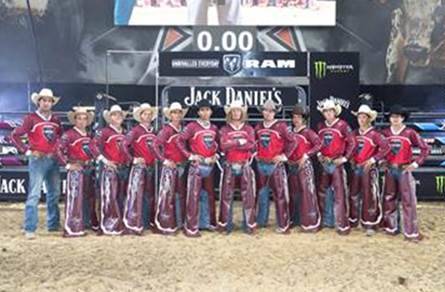 It wasn't just Queensland's rugby league team that crushed its south-of-the-border opposition this week - the Maroon bull riders also did the state proud in the inaugural PBR Origin.

It wasn't just Queensland's rugby league team that crushed its south-of-the-border opposition this week - the Maroon bull riders also did the state proud in the inaugural PBR Origin.

Held at the ICC Sydney Theatre in front of a capacity crowd, the two 11-rider teams representing Queensland and NSW decided who was the toughest state on dirt.

Paton had a perfect 2-for-2 on the night to add 173 points to the Maroon's total, and was closely followed by Atherton teammate Kurt Shephard who scored 172.5 points, Brady Fielder from Clermont on 169.5 points, and 2018 PBR Australia champion Aaron Kleier, also from Clermont, who notched 167.5 points.

Kleier turned up the heat with an 86 point ride on Rock The House in the championship round.

It was a dominant performance from the Maroons in front of a vocal Sydney crowd, finishing with a combined total score of 682.5 from eight qualified rides, ahead of team NSW's total of 428.5 from five qualified rides.

However, it was Blues' rider Nathan Burtenshaw who took out the ride of the night, making the eight seconds on POA Ray Ban for a huge 89.5 points.

His combined score of 173 points from two qualified rides saw him lead the individual points tally for NSW.

The Blues' second highest scorer on the night was Cliff Richardson from Gresford who made the ride on Down Under for an 87.5 point qualified ride.

He was followed by Tamworth's Ethan Watts, who scored 85 points on POA Palooka, and team NSW captain Troy Wilkinson, Upper Horton, who notched an 83 point ride on POA Fully Locked and Loaded.

"The battles were fierce, the rides were electric, and the crowds were on the edge of their seat until the very last second," he said.