Graziers in areas of the inland central and north west have received their best rain in almost a year. 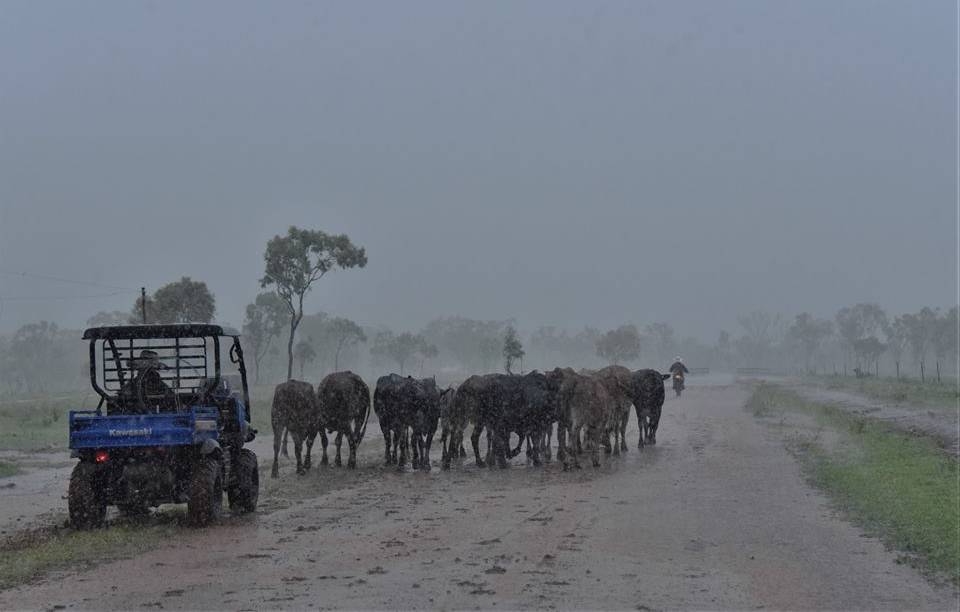 Graziers in inland areas of central and north Queensland have received their best rainfall in almost a year, as a monsoon trough lingers over the north.

Properties in the Winton, Richmond, Julia Creek and Hughenden areas are among those to have benefited from the wet season rain this week.

John Paynter from Wando Station 50 km east of Winton said he had received his best rain since March last year.

He received 55mm until 7am today and showers had continued during the day.

“It’s been a really good start, with excellent steady soaking rain, it is all soaked in so were’re in for a great start, and we’re hoping for something more in the next couple of days,” Mr Paynter said.

Mr Paynter said they had to start feeding supplements and hay to their livestock in September and October.

“In March last year we had some good rain that lasted 2.5 days, and while that was good if we got some follow up that would have given us a good year.

“If we could have got another couple of inches that would have set us up for the year, but then we’re extremely thankful for what we got.”

Cameron Kennedy is currently running about 1200 to 1300 at Castle Hill Station which is about 90km west of Winton on the Boulia Road. In a good season, they’d have 2500.

Mr Kennedy said the rain had started early yesterday with a few light showers and they had received over 50mm until midday today.

“It has been good rain, and we’re starting to run a bit of water,” Mr Kennedy said.

“We had our last rain in early March, but nothing since then. The cattle were getting really poor, so we’ll see how it goes.

“It’s only early January so there is plenty of time to get some more, it was getting too scary there last year, this would have been good three to four weeks ago, but it’s early enough to get some more.

“Even with what we’ve had now will give us three to four months breathing space to grow enough feed to kick the cattle along so we’ll see what happens.

“It gets you out of a bit of trouble and we appreciate it.”

At Stawellton Station, about 100km north east of Richmond Jacqui Jones said they had received about 92mm.

“It’s looking pretty good, it is still sort of drizzling at the moment, it’s still coming over so it’s good,” Ms Jones said.

“It had been a while, we had a bit of showers on and off but just a couple of mil, so we haven’t had big rain for a while.”

“We have had really good rain and if more keeps coming we’ll be pretty happy, it has been pretty dry, we’ve got buffel country around the house so that doesn’t take much to green up, but the rest of the property is spear grass, and it takes a lot more to keep that going.”

Mrs Jone said they had started to destock as they were concerned the rain would not come in.

“At the start of last year we had a good couple of months, but we’ve been getting a few cattle off just in case we didn’t get the rain.”

Jamie Moulin at Mt Pleasant, between Bowen and Collinsville said they had received the best rain for a couple of years.

He said about 180mm had fallen in the last three days, and it was still raining.

Mrs Roselt said they had cracked about 100mm since the rain first started on Monday.

“It is so good, absolutely it can turn a frown into a smile pretty quickly that’s for sure,” Mrs Roselt said.

“It first started on Monday and we got about 10mm with a few little showers on and off, but yesterday morning we’d had 34mm and there was a sharp shower yesterday afternoon of about 40mm and it has rained steadily all night.

“We’ve been really lucky, it's just been beautiful.”

Mrs Roselt said they had destocked and were feeding out a lot of lick following a dry year.

“This will be amazing we obviously need a lot more, but a lot of creeks have run and we rely on them for surface water here, that that will help to give us some breathing space.

“We were running out of options a bit like a lot of people on the land.

“We have about 4000 breeders here at the moment, so we’re down on normal but it’s still good to have that many.

“Absolutely it gives us a bit breathing space it makes the year look a lot brighter.”